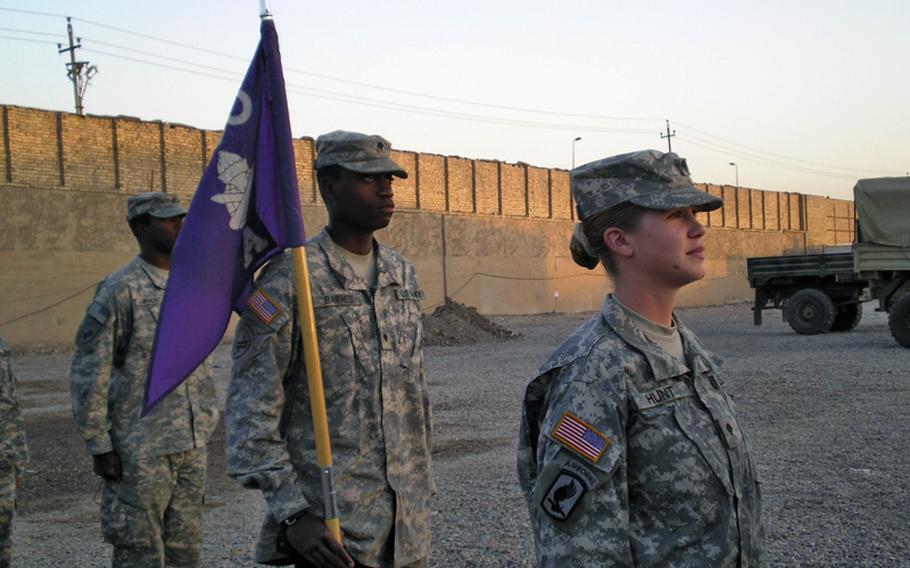 Jennifer Hunt was injured in a roadside bomb explosion in 2007 in Iraq. When she visited her local Department of Veterans Affairs hospital to seek treatment for pain, her young female doctor was surprised to learn that Hunt had been injured in combat. ()

Jennifer Hunt was injured in a roadside bomb explosion in 2007 in Iraq. When she visited her local Department of Veterans Affairs hospital to seek treatment for pain, her young female doctor was surprised to learn that Hunt had been injured in combat. () 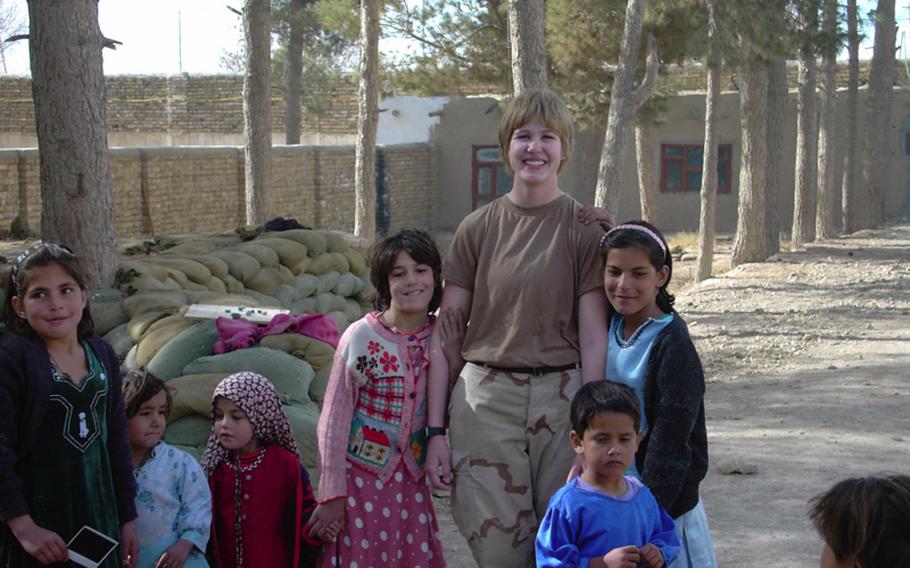 Jennifer Hunt, posing for a photograph with Afghan girls in 2005, was injured in a roadside bomb explosion in 2007 in Iraq. When she visited her local Department of Veterans Affairs hospital to seek treatment for pain, her young female doctor was surprised to learn that Hunt had been injured in combat. () 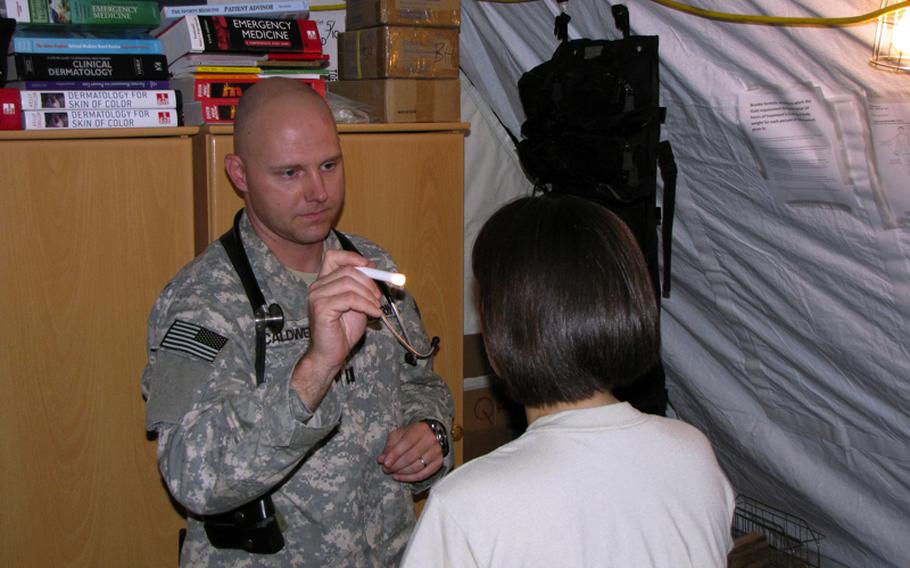 Capt. Aaron Caldwell, 36, of Blacksburg, Va., gives a female airman a checkup at the clinic at Camp Marmal near Mazar-e-Sharif in northern Afghanistan. The Iraq and Afghanistan wars have profoundly changed military service for women, yet on the battlefield and after their tours end, their health care has only recently started to catch up. () 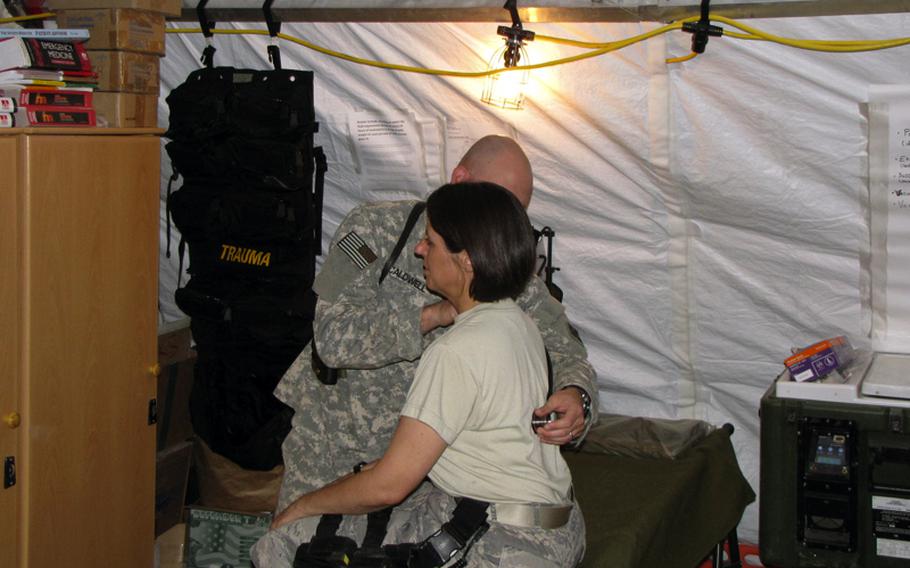 Capt. Aaron Caldwell, 36, of Blacksburg, Va., gives a female airman a checkup at the clinic at Camp Marmal near Mazar-e-Sharif in northern Afghanistan. The Iraq and Afghanistan wars have profoundly changed military service for women, yet on the battlefield and after their tours end, their health care has only recently started to catch up. ()

Outside of Baghdad in 2007, Jennifer Hunt&rsquo;s convoy was struck by a roadside bomb. Shrapnel penetrated her cheek, exited below her chin, and lodged into her arms and back.

Hunt, a 26-year-old sergeant in the Army Reserve, now has only one visible remnant from the blast: a dimple where the shrapnel pierced her right cheek.

&ldquo;I joke that it is my Iraqi kiss,&rdquo; she said.

Back home, when Hunt arrived at her local Veterans Affairs hospital to seek treatment for pain, her young female doctor was surprised to learn that she was injured in combat. Hunt wondered why, after all the stories about hundreds of women wounded and killed in the wars in Iraq and Afghanistan, a VA doctor wouldn&rsquo;t be better informed.

&ldquo;It made me pause about using the VA again, but it didn&rsquo;t bother me enough to give up the care that I earned,&rdquo; Hunt said.

The Iraq and Afghanistan wars have profoundly changed military service for women, who are considered indispensable in counterinsurgency operations because of their ability to interact with Arab women, something men cannot do for cultural reasons. And women are often in convoys that are attacked. Yet, on the battlefield and after their tours end, their health care has only recently started to catch up.

Servicewomen, like men, are returning with severe shrapnel wounds and with limbs mangled and severed by bombs. But they also have health care needs unique to their gender: reproductive issues, difficulty returning to roles as wives or mothers after long deployments and ongoing struggles with post-traumatic stress disorder, not just from exposure to combat, but also from military sexual assault.

Recent legislation, part of a broader veterans&rsquo; health bill passed in May with bipartisan support, requires the VA to study gender-specific mental, physical and reproductive health consequences for women who have served in Iraq and Afghanistan.

And, on Wednesday, VA leaders and veterans discussed the department&rsquo;s increased efforts and the need to improve women&rsquo;s health care.

&ldquo;We are late, and the surge in women veterans has begun and will continue,&rdquo; Veterans Affairs Secretary Eric K. Shinseki said during an event at the Women in Military Service for America Memorial at Arlington National Cemetery, according to The Washington Post.

Shinseki, a retired four-star general and former Army chief of staff, has made increasing services for women a top priority, securing $217 million in gender-specific programs for the next fiscal year, a 21 percent increase from 2009, the Post reported.

Herrera, who also treats patients, said reproductive issues are a particular concern for female veterans &mdash; a reported 34 percent of servicewomen return from deployments with genitourinary issues compared with just 8 percent of men.

Urinary tract infections and chronic pelvic infections are a problem downrange, where women may not be relieving themselves for long periods of time.

&ldquo;On a four- or five-hour convoy,&rdquo; Hunt said, &ldquo;you may not want to get out to pee, so you hold it. &rdquo;

Unsanitary conditions or dehydration after carrying heavy packs in the desert may also be factors, Herrera said. And getting routine gynecological care can prove trying for women downrange. In a recent report published by the nonprofit group Iraq and Afghanistan Veterans of America, women said they often felt uncomfortable asking their commanders, who are mostly men, for travel orders to get annual gynecological tests, such as pap smears.

Hunt, who formerly worked as project coordinator for IAVA, said most women forgo their reproductive health care downrange because they don&rsquo;t want &ldquo;to go and ask a commander to see an Ob-Gyn.&rdquo;

To make women feel more comfortable, the military is training more women&rsquo;s health practitioners and deploying them to forward operating bases, which would make access to care easier. Women who receive abnormal results on pap smears, a test for cervical cancer, no longer have to be evacuated to Landstuhl Regional Medical Center in Germany, said Lt. Col. Marybeth Lenz, a women&rsquo;s health nurse at Landstuhl. Air Force hospitals at Balad and Bagram, for example, are now equipped to perform colposcopies, a procedure that checks for cervical abnormalities indicative of cancer.

&ldquo;With minor abnormalities,&rdquo; she said, &ldquo;we can still deploy them because we have the ability to follow them downrange.&rdquo;

Lenz said she talks to patients about birth control before they deploy, not only because pregnancies when deployed are undesirable, but because birth control can also reduce menstruation and associated discomfort.

Besides reproductive issues, returning female veterans also suffer from back, joint and muscle pain from carrying heavy gear. To rectify this, Hunt said equipment should be made to fit women&rsquo;s bodies.

&ldquo;The rucksack is made for a male back,&rdquo; she said. &ldquo;The way the straps are configured, it pulls us back because we carry our center of gravity differently.&rdquo;

&ldquo;For a lot of these women, because they are now truly in combat, they are having issues that we haven&rsquo;t seen in the past,&rdquo; Lenz said.

Of the more than 1.6 million U.S. troops who have been deployed to Iraq and Afghanistan, about 15 percent are women, according to the military.

Since the start of the wars, more than 26,000 female veterans have been diagnosed with some sort of mental disorder, according to the VA. Through late 2009, the number of women diagnosed with PTSD reached 11,713. Dr. Daphne Brown, chief of behavioral health at Landstuhl, said sexual assault is as much a cause of distress for women in the military as combat itself.

&ldquo;What we are finding,&rdquo; she said, &ldquo;are more women are getting PTSD from sexual assault than their combat experience.&rdquo;

In 2009, more than 3,200 sexual assaults were reported in the military, up nearly 11 percent from the year before. Though reporting sexual assaults downrange has become easier&mdash;one possible reason for the increase in numbers &mdash; it still occurs more often than is reported, said Lenz, who is also a sexual assault care coordinator. Screenings at VA hospitals show that about 22 percent of women have experienced some sort of sexual trauma while in the military.

To address this, nurses like Lenz are deploying downrange to enhance routine health care and prevent sexual assault, and the new veterans&rsquo; legislation mandates that the VA must train mental health professionals to care for women who have suffered sexual assault.

Even prior to the bill&rsquo;s signing, the VA had trained much of its staff in caring for victims of military sexual trauma, said Susan McCutcheon, director for the VA&rsquo;s Family Services, Women&rsquo;s Mental Health and Military Sexual Trauma department. All women, as well as men, are screened for military sexual trauma when they seek treatment at the VA, she said.

Changes at the VA

As the number of returning women veterans has swelled, some have become outspoken about lapses at VA hospitals that make it uncomfortable for them to seek care.

&ldquo;There are a lot of horror stories,&rdquo; Hunt said, referring to news reports. &ldquo;Not having a female restroom, examining tables that face an open doorway, getting catcalled or getting mistreated by counselors. I think there is a lot to be done in selling women that the VA is a place they should go.&rdquo;

Patricia Hayes, chief consultant for Women Veterans Health, said that hospitals are already being retrofitted with private waiting rooms and bathrooms to better accommodate female veterans. The culture of the VA, dominated by men for decades, needs to change as well, she said.

&ldquo;If you fix a room, you don&rsquo;t necessarily change the culture,&rdquo; Hayes said. &ldquo;We have to make sure that the culture is welcoming, that women feel that they are a vital part of the care that is going on.&rdquo;

To do this, the VA has employed more female practitioners; about 50 percent of the counselors and therapists at VA hospitals are now women. Getting women to enroll in the VA is often the biggest hurdle, Hayes said, because older women don&rsquo;t always think of themselves as &ldquo;veterans,&rdquo; and younger women perceive VA hospitals as places where men gather.

Hunt has seen this problem as well.

&ldquo;I think the biggest challenge,&rdquo; she said, &ldquo;is getting female veterans to think of themselves as veterans.&rdquo;