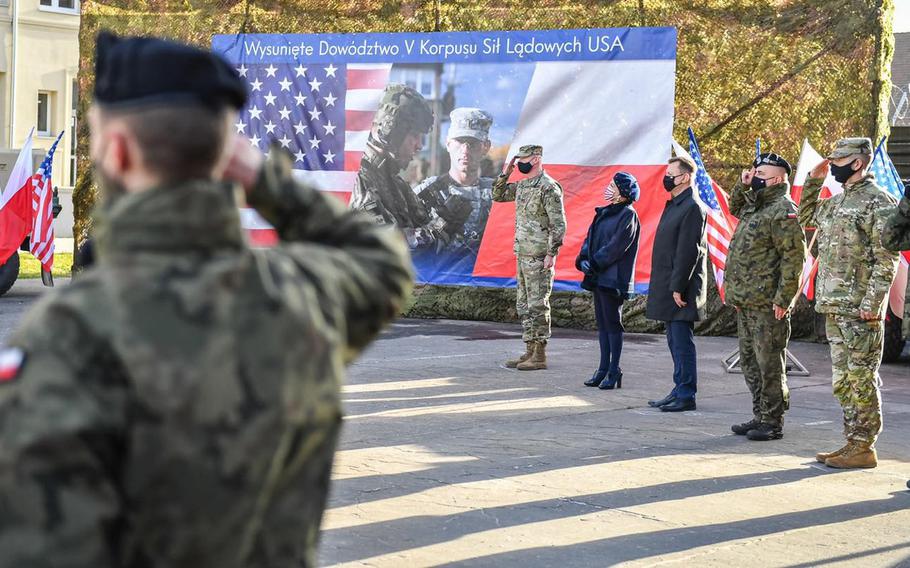 STUTTGART, Germany — The Army’s V Corps officially returned to Europe Friday with a ceremony at the unit's new forward headquarters in Poznan, Poland, from where it will command missions along NATO’s eastern flank.

The first soldiers attached to the Poznan headquarters began arriving last month after the Army reactivated the unit at Fort Knox, Ky. About 200 troops will eventually be assigned to the forward element in Poland while an additional 400 will work from Kentucky.

The activation of the Poznan mission came after Polish President Andrzej Duda on Nov. 9 signed off on a security cooperation pact that paved the way for the unit to officially launch.

U.S. Army Europe said in a statement this week that they expect the new headquarters to be fully operational by November 2021.

“The mission of V Corps will include command and control of assigned and rotational units in support of U.S. Army Europe and U.S. European Command,” USAREUR said. “The Forward Headquarters will be critical to accomplishing these responsibilities.”

V Corps will play a key role in upcoming U.S. European Command exercises, including Defender-Europe 21, which will take place in the Balkan and Black Sea regions in the spring, USAREUR said.

The military announced in February that it was reforming V Corps to provide more support to an expanding Army mission in Europe. In September, the Army selected Poznan, Poland as the command post.

V Corps’ history in Europe dates to 1918 when it was activated during World War I. It was a fixture in Germany throughout the Cold War but was deactivated in 2013 as part of the Army’s gradual drawdown in Europe.