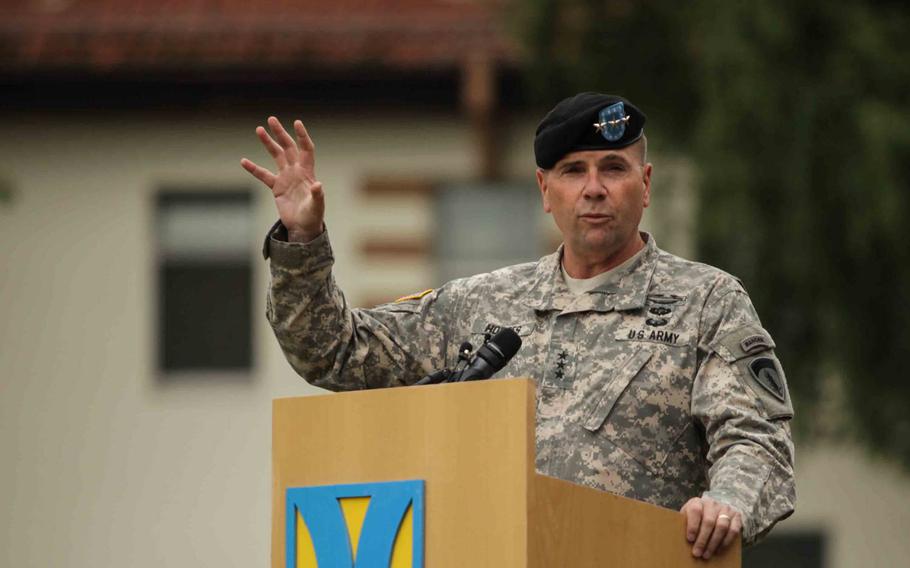 BRUSSELS — Moving nearly a brigade’s worth of U.S. tanks and other armored vehicles to locations across eastern Europe by next summer is more than a symbolic gesture of reassurance, the Army’s top commander in Europe said Wednesday.

“We’ve got tanks, Bradleys and howitzers already in the flow,” U.S. Army Europe’s Lt. Gen. Ben Hodges said in a telephone interview. “By the end of this year, I think we will be at 95 to 98 percent complete.”

All equipment will be in place in eastern Europe by June 2016, he said.

U.S. Defense Secretary Ash Carter on Tuesday announced the “temporary” placement of 250 armored vehicles in three Baltic countries as well as in Poland, Romania and Bulgaria.

Moscow, which has described the effort as possibly the U.S.’s most aggressive move since the end of the Cold War, accused the U.S. of amplifying tensions with plans to deploy armor on Russia’s periphery.

But he also said the tanks should send a message of deterrence to any aggressor. He rejected the idea that a brigade’s worth of armor amounts to only a symbolic gesture in light of significant Russian military presence on NATO’s eastern flank.

With a Russian military buildup in Ukraine’s Crimea Peninsula on the Black Sea — on which Romania and Bulgaria also sit — and Kaliningrad — a strategic enclave nestled between Poland and Lithuania on the Baltic Sea — Moscow now has the ability to “deny access to parts of Europe,” he said. He did not elaborate on how it might do that.

Armor in the east improves NATO’s state of readiness in a crisis, Hodges said. “This is a significant amount of capability.”

“The United States also has 30,000 soldiers forward stationed and working and training with allies every day. Then you bring in the rotational force with an effective formation and combat power and this is just one part of it,” he said.

Combined with other U.S. military assets in Europe and those of allies, NATO is well positioned, he added.

“It is paramount to keep the alliance together, because together, all that capability is significant,” Hodges said.

The push east is part of an effort to streamline training missions in the region, improve alliance readiness and reassure nervous allies worried about Russian intentions in the region. However, the “temporary” placement of armor in the east also raises questions about the longevity of the American commitment.

Hodges, stopping short of describing the effort as permanent, said he expects U.S. Army firepower to be in the region for the long term.

For the U.S., the emphasis on temporary and rotational forces has been one way to ease concerns among some NATO members, who fear talk of a permanent presence in the region risks an escalation of tensions with Russia. Germany for one has been vocal in opposing permanent placement of NATO troops in eastern Europe.

The U.S. must be mindful of reservations among partners, Hodges said.

“The unity of the alliance is paramount. Keeping everyone on the same team,” he said. “How different nations view this decision — that matters. Assuring allies, but not doing so in a way that causes concern…. Any nation that thinks these are war stocks being prepositioned further east is just inaccurate.”

As long as there is a rotational force circulating through Europe — a measure that is a fundamental part the Army’s strategy on the Continent — the equipment will likely be positioned in Europe’s east.

“It is there to facilitate the rotational force,” Hodges said. “As long as those nations invite us and request the assistance, as long as the alliance decides this is important.”

NATO officials have said other allies also are looking at ways to preposition equipment, but the U.S. move helps set a precedent.

“The U.S. Army provides a gravitational pull for the alliance,” Hodges said. “If the U.S. does things, it emboldens other countries.”

About 60 percent of the armored equipment is already in Europe and is being used by soldiers rotating through eastern Europe, Hodges said. When not in use, the equipment will be kept at Army facilities in Grafenwöhr and Coleman Barracks in Mannheim until locations in the east are ready.

The U.S. still needs to arrange contracts — cost-sharing plans for the new storage sites — but those efforts are expected to be completed in time to move the gear by early next summer, he said.