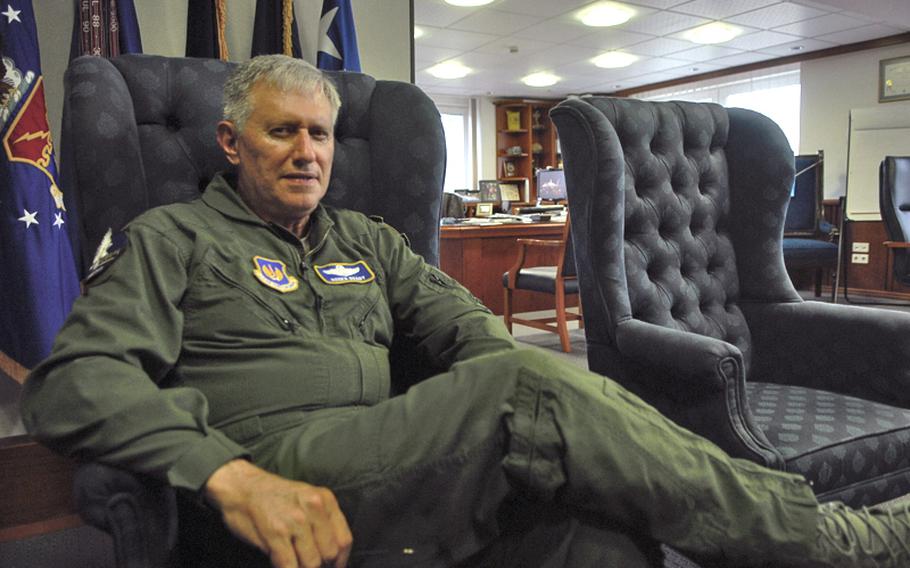 Buy Photo
Gen. Roger Brady, U.S. Air Forces in Europe commander, is a vocal advocate of a continued U.S. military presence in Europe, despite repeated calls by some U.S. lawmakers to reduce that footprint to save money. Brady is expected to retire soon, but no date has been set. (Jennifer H. Svan/Stars and Stripes)

RAMSTEIN AIR BASE, Germany &mdash; On the eve of his departure as U.S. Air Forces in Europe commander, Gen. Roger Brady remains a vocal advocate of a robust U.S. military presence in Europe, despite calls by some U.S. lawmakers to reduce that footprint in an effort to curtail a ballooning defense budget.

Working with European allies builds partnerships that reap dividends in war and peace, Brady said, citing support from more than three dozen European nations in the Afghanistan war. Those alliances can&rsquo;t be forged from a distance, he said in a recent interview at USAFE headquarters.

&ldquo;You do that by being here,&rdquo; he said, sitting in his office on Ramstein Air Base.

Brady, 64, has commanded USAFE since January 2008, in what is supposed to be his last assignment in a decorated Air Force career reaching back more than 40 years.

He was expected to hang up his uniform by now.

The Air Force announced nearly a year ago that Brady would retire in early January, naming Lt. Gen. Mark Welsh III as his successor. The Senate confirmed Welsh, the Air Force&rsquo;s top officer at the CIA, for promotion to general last year.

But as of Friday, there was still no word on Brady&rsquo;s retirement date.

General officer retirements must be approved by the Air Force, Joint Chiefs of Staff chairman, Office of the Secretary of Defense, and finally, by the president, said Beth Gosselin, an Air Force spokeswoman at the Pentagon. She could not say where Brady&rsquo;s retirement was in that approval chain.

In the meantime, Brady soldiers on, continuing to underscore the importance of keeping U.S. military bases in Europe, as some U.S. politicians clamor to bring more overseas U.S. troops home.

&ldquo;I do not think we should be spending money to have troops in Germany 65 years after World War II,&rdquo; Rep. Barney Frank, D-Mass, said recently. &ldquo;We have a terrible deficit and we have to cut back.&rdquo;

Frank and Rep. Ron Paul, R-Texas, are leading a congressional effort to save an estimated $1 trillion in military spending by vastly curtailing the U.S. military&rsquo;s overseas commitments, including in Europe.

&ldquo;The nations of Western Europe now collectively have greater resources at their command than we do, yet they continue to depend overwhelmingly on American taxpayers to provide for their defense,&rdquo; Frank and Paul wrote in an article first published this summer in The Huffington Post.

But Brady is focused on building relationships on the Continent, efforts that he says have translated into support from European countries when the United States has needed it most &mdash; in Afghanistan.

Of the 46 nations involved in the war in Afghanistan, 39 are from Europe, Brady said, contributing about 39,000 of the more than 119,000 troops serving in Afghanistan.

&ldquo;I think that is huge,&rdquo; he said.

And, while the Cold War may be over, the nature of future conflicts is unpredictable, Brady said.

&ldquo;When we go to war, we go to war with our European allies. They are our most reliable partners.&rdquo;

Brady said the U.S. footprint in Europe is vastly smaller than it has been in the past. Currently, there are more than 25,000 active-duty members assigned to USAFE, spanning nine wings, seven fighter squadrons and eight bases. There were more than 32,000 airmen in Europe 10 years ago.

USAFE funds its military partnering activities through the U.S. European Command. Most partnership building is accomplished &ldquo;as a natural outcome&rdquo; through combined training and exercises, USAFE officials said, primarily conducted by those forward-stationed forces in Europe.

&ldquo;The mission is not going away,&rdquo; Brady said. &ldquo;The mission of maintaining access to three continents, the issue of enabling our allies &hellip; none of that changes. We really can&rsquo;t do that effectively with less.&rdquo;