US Special Forces train in Serbia, where China and Russia have strengthened military ties 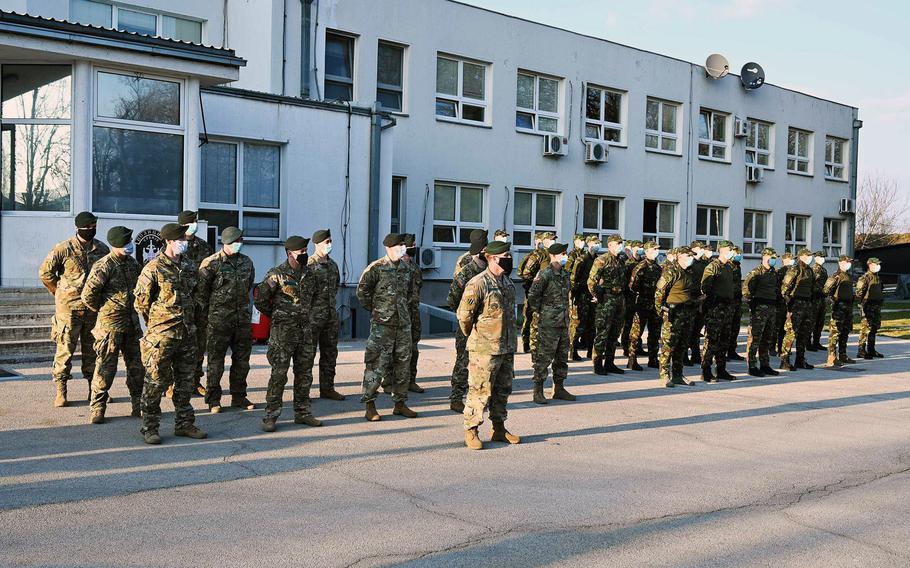 Green Berets and Serbian forces stand in formation at a training site near Belgrade, where U.S. troops are on a one-month mission in March to train with Serbian counterterrorism units. (Serbian Interior Ministry )

STUTTGART, Germany — A contingent of Green Berets arrived this week in Serbia, where U.S. military commanders are looking to strengthen ties even as Belgrade deepens its connections with rivals China and Russia.

The Special Forces team, based out of Stuttgart, will be in Serbia for one month, training alongside elite Serbian counterterrorism units.

“Because they are sitting there at a crossroads, it is a vulnerable point for Europe as a whole,” Maj. Gen. David Tabor, head of U.S. Special Operations Command Europe, said of Serbia.

It’s the first time that U.S. special operators have been in the country since the coronavirus began sweeping through Europe last year.

U.S. troops are focused on building up Serbian capabilities to deal with threats that include potential efforts by Islamic militants to transit from the Middle East into Europe via Serbia, said Tabor, who was in Belgrade earlier in the week for talks with his military counterparts.

“We have a vested interest in sensing those terrorist threats as soon as possible,” Tabor told Stars and Stripes in an interview.

But if counterterrorism is the focus at the tactical level for the Green Berets, the return of U.S. troops to Serbia also comes amid concern about Belgrade’s increasingly close ties with Beijing and Moscow.

“Beijing’s export of drones is motivated by the desire to penetrate the European defense market and promote China as a rising power,” wrote security expert Vuk Vuksanovic, an analyst for the London-based Royal United Services Institute think tank.

Serbian President Aleksandar Vucic frequently boasts of his personal ties with Russia’s leader Vladimir Putin, whom he has met a number of times.

China also has invested heavily in Serbia, pouring money into rail and energy projects and also offering coronavirus vaccines to help the country contend with the pandemic.

Vucic has described his country as China’s “most significant and closest friend” in Europe and has called President Xi Jinping his “brother.”

The increasingly close economic and military ties have gotten the attention of U.S. commanders.

Tabor said he wants his operators to be more involved in the Balkans going forward, and that Serbia is a key part of that effort.

“Flashpoints are just about everywhere you turn down there. There is a long history with long memories,” he said.

So far, Tabor said he sees China’s influence in Serbia, and elsewhere in region, as economic-based.

“That is a concern for us,” Tabor said.

Serbia, a neutral country in a “tough neighborhood,” has historically faced a “a pull and tug” between larger powers in the East and West, Tabor said. Over the long-term, Tabor thinks the pull of the West will be stronger.

“They really do see their future in the EU,” Tabor said.