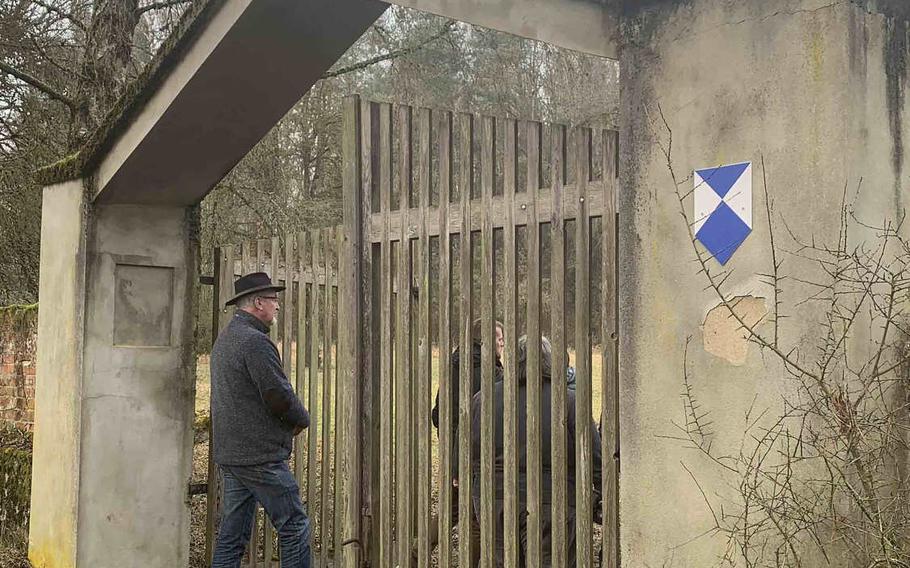 Buy Photo
The prisoner of war camp at Hohenfels, Germany, was turned into a camp for displaced people after it was liberated by the U.S. 65th Infantry Division in January 1945. (Immanuel Johnson/Stars and Stripes)

Buy Photo
The prisoner of war camp at Hohenfels, Germany, was turned into a camp for displaced people after it was liberated by the U.S. 65th Infantry Division in January 1945. (Immanuel Johnson/Stars and Stripes) 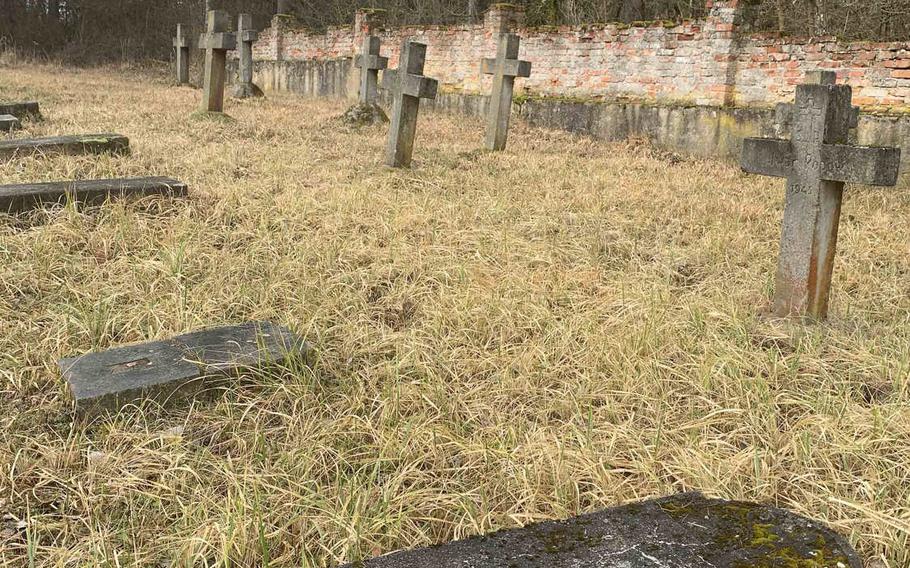 Buy Photo
The displacement camp at Hohenfels housed Poles, Ukranians and Jews whose names were unknown and their bones were exhumed to Hammelburg. In May 1945, the first displaced people arrived at Hohenfels. (Immanuel Johnson/Stars and Stripes) 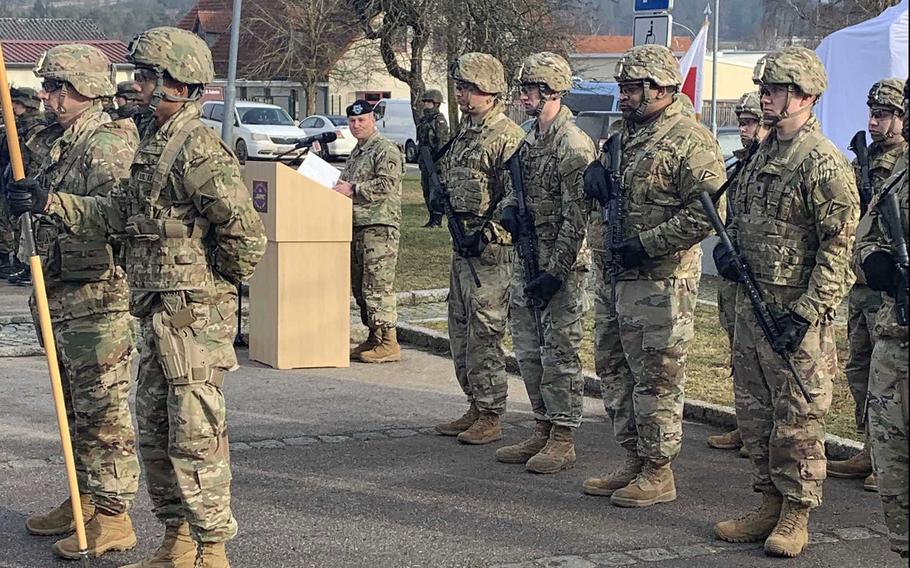 Buy Photo
Lt. Gen. Christopher Cavoli, 3rd from left, commanding general of U.S. Army Europe, addresses the crowd during a ceremony marking 75 years since a prisoner of war camp at Hohenfels, Germany, was liberated by U.S. troops. The event was held on January 27, 2020, the 75th anniversary of the liberation of the Nazi regime's Auschwitz-Birkenau death camp in southern Poland. (Immanuel Johnson/Stars and Stripes) 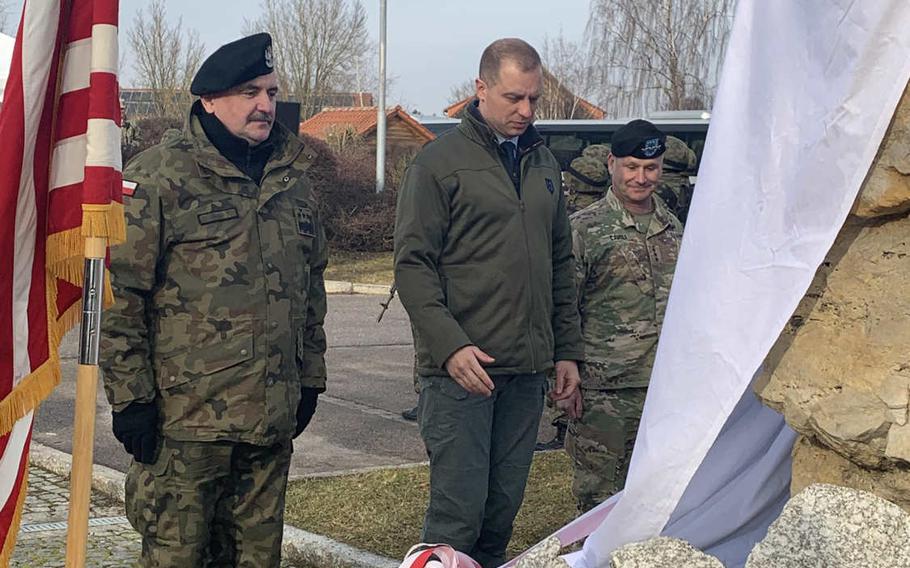 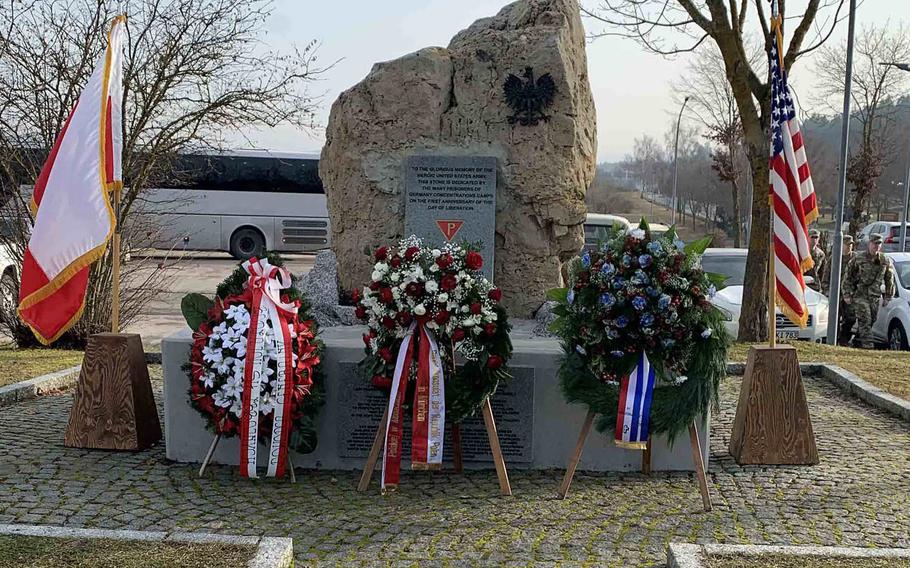 Buy Photo
The renovated monument at Hohenfels, Germany, has an inscription that reads ''To the glorious memory of the heroic United States Army this stone is dedicated by the many prisoners of German concentration camps on the first anniversary of the Day of Liberation." (Immanuel Johnson/Stars and Stripes)

HOHENFELS, Germany — Americans and Poles on Monday commemorated the liberation 75 years ago by U.S. soldiers of the Stalag 383 prisoner-of-war camp, which was set up by Nazi Germany on land that now houses this U.S. Army installation.

Mainly British service members were held as prisoners of war at Hohenfels by the Nazi regime, but after it was liberated by the Americans, “This former prisoner-of-war camp … became a safe haven … that provided relief and shelter and medical care to 12,000 displaced Polish citizens for the next five years,” Cavoli said.

The ceremony marking the Americans’ arrival at the camp was held 75 years to the day after the most notorious Nazi death camp, Auschwitz-Birkenau in southern Poland, was liberated by soldiers from the Soviet Union.

More than a million people were worked to death, died of disease or were sent straight from the deportation trains to perish in the purpose-built gas chambers at Birkenau during World War II. Most of the people killed at Auschwitz were Jews, but Polish resistance fighters, Catholic priests, homosexual people, gypsies and others also were interned in the death camp between June 1940 and January 1945.

“January 27 is a very important day in our history,” Polish General Jaroslaw Mika, commander of the Polish Armed Forces, said at the ceremony in Hohenfels.

As Cavoli, Mika, and Poland’s Ambassador to NATO, Tomasz Szatkowski, dedicated a monument to the American soldiers who liberated Stalag 383, Szatkowski praised the U.S. Army in Europe, saying, “They liberated many nations.”

Today, the U.S. and its European allies, including Poland, are working “to strengthen Europe’s eastern flank through our shared commitment to NATO’s enhanced forward presence,” Cavoli said.

A U.S.-led task force is working with the 15th Polish Mechanized Brigade in Bemowo Piskie, about 50 miles south of the Russian exclave of Kaliningrad, “to ensure security of that corner of our world,” said Cavoli. American troops are also in Torun in central Poland, and Poznan, about 180 miles west of the capital, Warsaw.