A Navy P-3C Orion maritime patrol aircraft attached to Patrol Squadron 4 conducts a fly-by of the guided-missile destroyer USS Cole in this Navy file photo. In December VP-4 participated in operations off the coast of Scotland, which British and American media described as a search for a foreign submarine. (Courtesy of the U.S. Navy)

A Navy P-3C Orion maritime patrol aircraft attached to Patrol Squadron 4 conducts a fly-by of the guided-missile destroyer USS Cole in this Navy file photo. In December VP-4 participated in operations off the coast of Scotland, which British and American media described as a search for a foreign submarine. (Courtesy of the U.S. Navy) 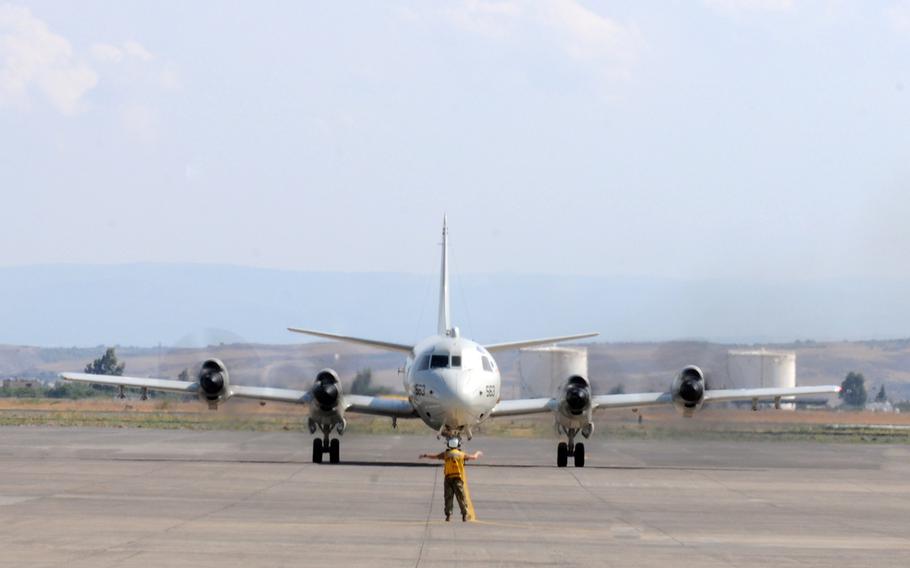 A Navy P-3C Orion with Patrol Squadron 47 lands at Naval Air Station Sigonella. P-3C aircraft from Sigonella participated in operations off the coast of Scotland in December in what British and American media have described as a search for a foreign submarine believed to be operating in the area. (Courtesy of U.S. Navy)

The U.S. Navy contributed maritime patrol aircraft for operations with the Royal Navy off Scotland’s coast last month in what British and American media have described as a hunt for a foreign submarine.

Two P-3C Orion patrol aircraft were dispatched to the United Kingdom for operations between Nov. 27 and Dec. 7 and again between Dec. 31 and Jan. 8, said Cmdr. Philip Rosi, a spokesman for U.S. Naval Forces Europe-Africa. Each time, aircraft were based at RAF Lossiemouth in northern Scotland, he said. They have since returned to the U.S. naval air base at Sigonella, Sicily.

The aircraft are part of the maritime patrol squadron VP-4 out of Hawaii, which is on a routine deployment to the Sicily base, Rosi said.

Neither Rosi nor a spokesman for the British Defense Ministry would speak to the nature of the operations. Citing unnamed sources, the British newspaper The Independent claimed that British and American patrols were searching for a Russian vessel last week and that Russian submarines have been making frequent “visits” off the northern and western coasts of Scotland. Of concern is the area around Gare Loch, the newspaper said, home to the Faslane naval base and the U.K. nuclear-armed submarine force.

The magazine Aviation Week reported a month earlier that Canadian and French maritime patrol craft joined British surface ships during a search for a foreign submarine off the western coast of Scotland in late November and early December.

Ben Barry, a military analyst with the International Institute for Strategic Studies in London, said that a foreign submarine in the area searched would cause alarm, though he didn’t know the details behind the recent patrols.

“Any country that’s got ballistic missile submarines that’s going to operate from a specific base is going to be very sensitive to the idea that they are being (observed by) an adversary and tracked,” he said.

The U.S. says the Russian military has become more provocative in foreign waters and airspace since last year’s escalation of tensions with the West over the seizure of Crimea from Ukraine. Adm. Jonathan W. Greenert, the U.S. hief of Naval Operations, told an audience last year that Russia has been just as active undersea as it has in the air.

The Swedish military searched its waters last October after purported sightings of a foreign vessel. It later produced evidence of what it said was a submarine, including photos of a periscope and undersea tracks. Although officials never publicly blamed Russia, they left little doubt where their suspicions lay.

The British government has faced local criticism over the request for allied help in the search. The U.K. military axed its maritime patrol program in 2010 after a strategic defense review aimed at paring military spending. A program to replace the Royal Navy’s patrol aircraft, the MRA4 Nimrod, was due to begin the same year.

Barry, the analyst, said defense officials believed at the time that U.S. and NATO allies could provide a long-distance maritime patrol capability when needed.

The British military can deploy other anti-submarine warfare tools, Barry said, including fast-attack submarines, frigates with special sonar capabilities and a maritime patrol helicopter, the Merlin. He said the lack of a long-distance patrol platform wouldn’t be the only reason for the U.K. to call on Atlantic allies, who would have a natural interest in reports of a nearby foreign submarine.

The P-3 — a four-engine turboprop with a crew of 11, including pilots, flight engineers and sensor operators — can cover a radius of more than 2,700 miles.

Former British Defense Minister Philip Hammond has said a maritime patrol capability should be returned to the British military. Officials could debate the issue again later this year, when the next review is scheduled to begin.