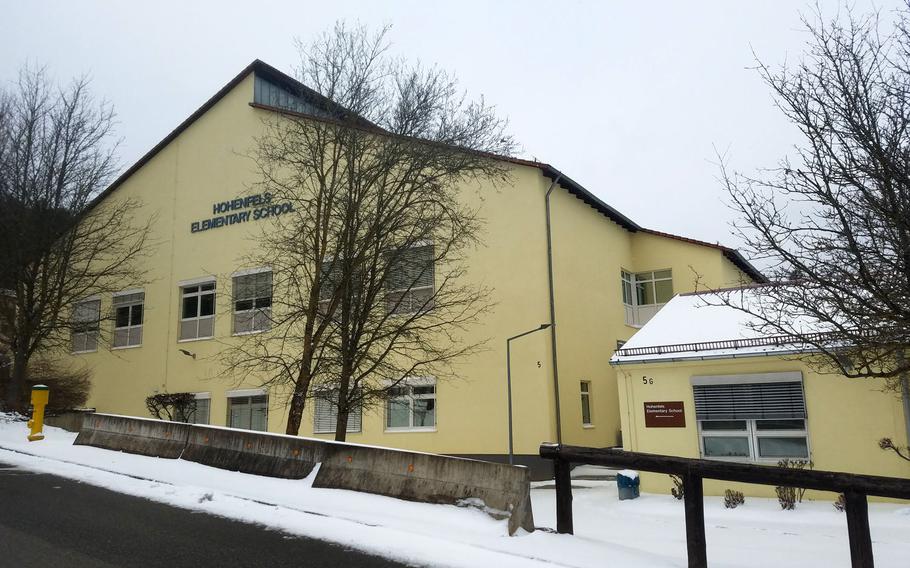 Buy Photo
Hohenfels Elementary School is one of many serving the U.S. military community in Germany that were closed on Monday, Dec. 7, 2020, after an unspecified number of coronavirus cases were reported. (Stars and Stripes)

Five U.S. military schools in Germany have been temporarily shuttered and services on bases have been restricted following a spike in coronavirus cases, as the host nation struggles to get the upper hand on a second wave of infections.

In Hohenfels, which is in Bavaria, the elementary and middle-high schools were closed Monday and Tuesday “due to a number of COVID positive cases” at both establishments, officials said Monday.

Other facilities for children including after-school academic programs and sports were also shut “out of an abundance of caution,” the base said on Facebook.

The closures came as Markus Soeder, state premier of Bavaria, called for another high-level meeting on the virus before Christmas.

“Coronavirus won’t let up ... We need to act and I think better sooner rather than later,” he said on public broadcaster ARD.

Students at Wiesbaden Middle School, who transitioned to remote learning just before Thanksgiving after coronavirus cases were reported in the school community, won't return to the classroom until winter break is over, on Jan. 4, said Stephen Smith, a spokesman for Defense Department schools in Europe.

“COVID-19 transmission prevention is a community effort,” he said in a statement. “To help ensure the health of our schools, we ask that our families continue to adhere to DOD and host nation restrictions regarding mask use, physical distancing and size limits for private gatherings.”

At Stuttgart High School, students switched to remote learning on Friday after reports of suspected cases at the school. In-person classes were to resume Tuesday, an announcement on Facebook said.

Baumholder Middle High School was also closed Monday and Tuesday after a member of the school community tested positive for the virus, principal Leah Zamor said in a letter to parents that was posted on the base’s Facebook page. The school was expected to reopen Wednesday, she said.

The first grade at Kaiserslautern Elementary School would close on Tuesday and Wednesday, following a positive test for the virus last week, principal David Groat said in a letter to parents. Classes were due to resume remotely starting Thursday and distance learning would continue for the first graders through Dec. 18, the letter said.

A rise in cases at Spangdahlem Air Base prompted base commander Col. David Epperson to raise the health protection condition to Bravo-plus and implement restrictions, although schools were not affected.

The increase in infections was “most likely tied to small private gatherings that occurred over Thanksgiving," Epperson said in a video message posted on the 52nd Fighter Wing’s Facebook page on Sunday.

“The numbers have grown to a place where we need to change what we’re doing,” he said.

Military officials at Hohenfels and Spangdahlem would not disclose the number of new cases, citing Pentagon policy and operational security concerns. But health authorities in the Bitburg-Prum district, which includes Spangdahlem, reported 198 new cases Sunday.

Among the restrictions expected to be implemented at Spangdahlem are size limits on gatherings and changes to who can use base gyms, Epperson said.

The restrictions would be “much like we did back in March,” he said, when the World Health Organization declared the coronavirus outbreak a pandemic and called on countries around the world to act urgently to stop it.

Germany weathered the first wave of the virus well, ordering businesses to close and people to stay at home unless they absolutely had to go out. The country managed to keep infections and deaths low compared to other countries, but it has not fared as well during the second wave, which began ramping up in October.

A partial lockdown imposed at the beginning of November was supposed to be lifted at the end of last month but has been extended until next year as infections remain high.

Chancellor Angela Merkel's chief of staff, Helge Braun, has called on Germans to try to reduce contacts and distance learning should be considered for some older children in coronavirus hotspots, Deutsche Welle reported.

Germany's schools have stayed open, for the most part, during the second wave.

A vaccination campaign against the virus is expected to begin in Germany early next year, Braun said.

Over 1.5 million people have died of the disease caused by the virus , data compiled by the WHO and Johns Hopkins University showed Monday. Fewer than 19,000 of those deaths have been in Germany and more than 282,000 in the U.S. Only 129 involved Defense Department personnel or their families.

Marcus Kloeckner and Karin Zeitvogel contributed to this story.