US military in Italy keeps schools, some gyms open as it grapples with second coronavirus wave 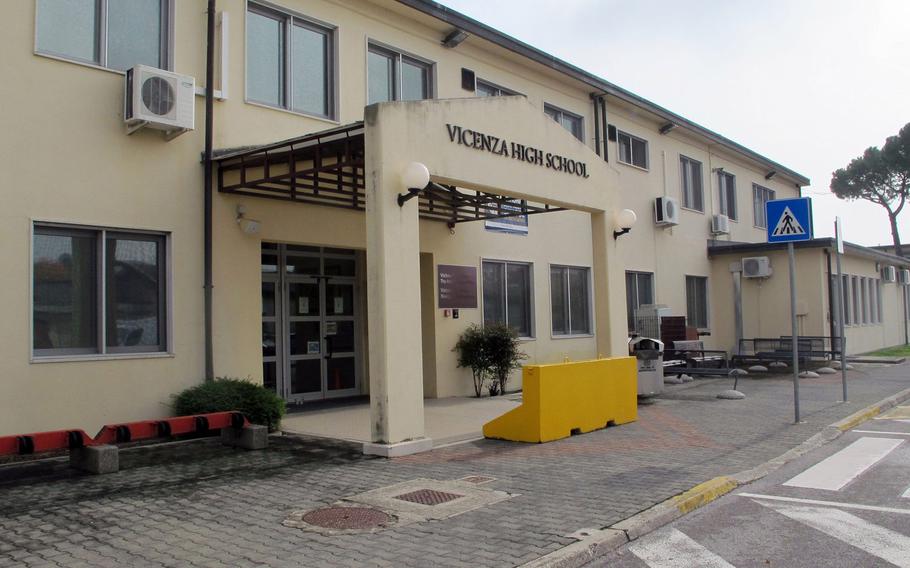 Buy Photo
Vicenza High School, which closed for a day on Oct. 26, 2020, after a student tested positive for the coronavirus. Although Italian high schools are requiring that 75% of their students go to school online, the base high school's classrooms will remain open. (Nancy Montgomery/Stars and Stripes)

As the second wave of the virus strikes the country, U.S. military actions are differing from Italy in a few ways — particularly in keeping school classrooms open for now — as they balance Italian decrees and Defense Department guidelines.

Italy, in addition to closing bars and restaurants after 6 p.m., has sent 75% of high school students home to complete their lessons online. But Vicenza High School, which closed for a day on Monday after a student tested positive for the virus, remains open.

“I know this year has been challenging and we’re all feeling fatigue,” he said. “I can’t predict how long this fight will last.”

U.S. Army Garrison Italy explained the difference in high school closures as a function of Italian high-schoolers relying on public transportation, something Vicenza students don’t use.

“I don’t think there’s a lot of difference in how we’re acting now and how we were in February,” Dillon said.

In the Campania region, home to the U.S. 6th Fleet, off-base schools closed in October after a spike in coronavirus cases. But the commander of Naval Support Activity Naples said Wednesday that Department of Defense Educational Activity classrooms would remain open.

“We are continually assessing the situation,” Capt. Jim Stewart said in a virtual town hall meeting.

NSA Naples officials said in an email that they have “incorporated additional precautions such as mask usage, increased classroom spacing and meal service, and we are working daily with our medical professionals to keep our children safe.”

The naval base has also kept gyms and swimming pools open but only for active-duty service members.

Aviano Air Base in northeast Italy closed its gym earlier this week, mirroring the country outside the gates. Its high school remains open.

Since schools reopened in September, DODEA’s policy has been to close schools and send students to remote learning when a base is deemed to have sustained community transmission of the virus, which is deemed Health Protection Condition Charlie.

The HPCON designation “is not a DODEA decision, that is an installation command decision,” said Stephen Smith, a DODEA spokesman.

A significant metric is the average number of new cases per 100,000 people over seven days. More than 50 cases per 100,000 indicates sustained community transmission, according to Defense Department guidance, and would seemingly move a base to HPCON Charlie and closed schools.

On Friday, Naples’ weekly average, which had been climbing daily, was 51.4 per 100,000, according to a New York Times database.

But “Covid case rates are among many factors we consider in regards to changing the HPCON status at our installations,” Lt. Cmdr. Edward Early, an NSA Naples spokesman, said in an email Friday. “Currently, NSA Naples remains at HPCON B.”

In the Friuli Venezia Giulia region, where Aviano Air Base is located, the average was 29.8 per 100,000 people.

The Defense Department guidance also says that commanders may take into consideration testing and tracing capabilities, and medical treatment capacities.

Commanders “may be more or less stringent than surrounding community requirements based on mission and risk considerations,” the guidance says.

The Army town hall meeting did not discuss potential school closures, but some viewers wanted clarification.

“Knowing at what point that decision will become imminent is crucial to successful transition and (reduced) stress on all of us, including our military children,” one commenter wrote.

A garrison spokeswoman suggested contacting DODEA for information, which was followed by a reply from a DODEA Europe South District official.

“As per current DoD guidance, if an installation is in HPCON Charlie, schools will be closed to students, and we will transition to remote learning,” the official wrote.