US increases intelligence, airstrike support for France after Paris attacks 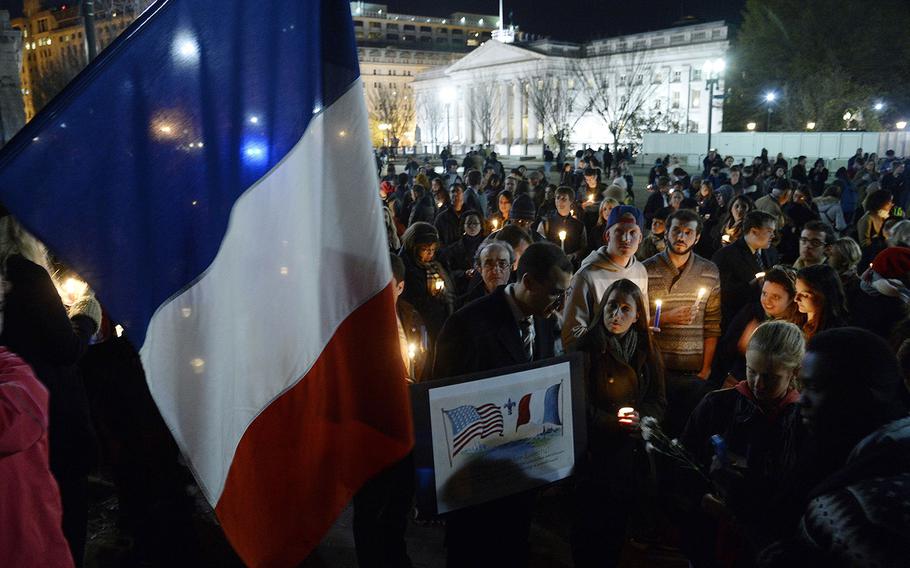 A crowd gathers for a vigil in honor of the victims of terrorist attacks in Paris at Lafayette Square, outside the White House, on Saturday, Nov. 14, 2015, in Washington, D.C. People gathered in cities around the world to show support for Paris following the coordinated assault that left at least 129 people killed and more than 350 injured. (Olivier Douliery, Abaca Press/TNS)

WASHINGTON — The United States said Monday it was increasing its support for French airstrikes against the Islamic State in the wake of weekend terrorist attacks in Paris, even as President Barack Obama dismissed critics who have called for the U.S. to change or expand its military campaign against the extremists.

The increased U.S. efforts include military operations planning and enhanced intelligence sharing, such as targeting information, according to defense officials. This played a role in Sunday night’s retaliatory airstrikes in which 10 French fighters launched from bases in the United Arab Emirates and Jordan and dropped 20 bombs on the Islamic State group in Syria. The strikes were a response to attacks on several restaurants, a concert hall and a sports stadium in Paris on Friday night that left at least 129 people dead and injured hundreds more.

“This will allow our personnel to pass threat information, including on [the Islamic State] to our French partners even more quickly and more often, because we need to be doing everything we can to protect against more attacks and protect our citizens,” Obama said Monday, following a two-day meeting in Antalya, Turkey with leaders from the Group of 20 rich and developing countries.

France was the first NATO country to join U.S.-coalition airstrikes against the Islamic State militants in Syria, said Col. Steve Warren, the Baghdad-based spokesman for Operation Inherent Resolve. The Islamic State has cited France’s participation as a reason for the Paris attacks. In a video aired Monday, the Islamic State group warned of attacks on Washington and nations that continue to support the U.S.-coalition airstrikes in Syria. In addition to the terror spree in Paris, the group has claimed responsibility for attacks in Lebanon and Turkey, as well as the downing of a Russian airline in Egypt.

The president brushed aside his critics who call for sending U.S. ground troops into the region and said it “would be a mistake” and wouldn’t work unless the U.S. was committed to being a permanent occupying force in the region.

“This is not an abstraction,” Obama said. “When we send troops in, those troops get injured. They get killed.”

The president’s approach centers largely on airstrikes in Iraq and Syria, as well as programs to train and equip moderate opposition forces. He’s also sent more than 3,000 troops to Iraq to assist that country’s security forces and recently announced plans to send up to 50 Americans into Syria.

But Obama did call the Paris attacks “a sickening setback” but said it will not impact the U.S.-coalition air campaign.

“Our coalition is intensifying our airstrikes,” he said.

More so, the region will soon see two aircraft carriers – one from the United States, the other from France.

The Truman will join the French aircraft carrier Charles de Gaulle, which is expected to depart Toulon, France on Wednesday for the Persian Gulf, a defense official who spoke on the condition of anonymity told Stars and Stripes.

Both deployments were planned before the attacks in Paris. There has been no U.S. or coalition aircraft carriers in the Middle East since the departure of the USS Theodore Roosevelt in early October.

Obama said he envisioned escalating that strategy, not overhauling it. And he called on other nations to step up their involvement in the fight against the extremists.

France has already ramped up its response. In its heaviest strikes yet, French military bombarded Raqqa, the Islamic State’s stronghold in Syria, in hopes of killing Islamic State organizers and trainees.

The French chose the targets in Sunday’s airstrikes in Syria “based upon information we were able to share with them,” Davis said.

The 10 French fighters were part of an intense air attack through early Monday that resulted in the destruction of more than 100 Islamic State targets, including fuel trucks, multiple fighting positions, other vehicles, depots and buildings. The French defense ministry said their airstrikes hit an Islamic State recruiting center, command post, armory and training center.