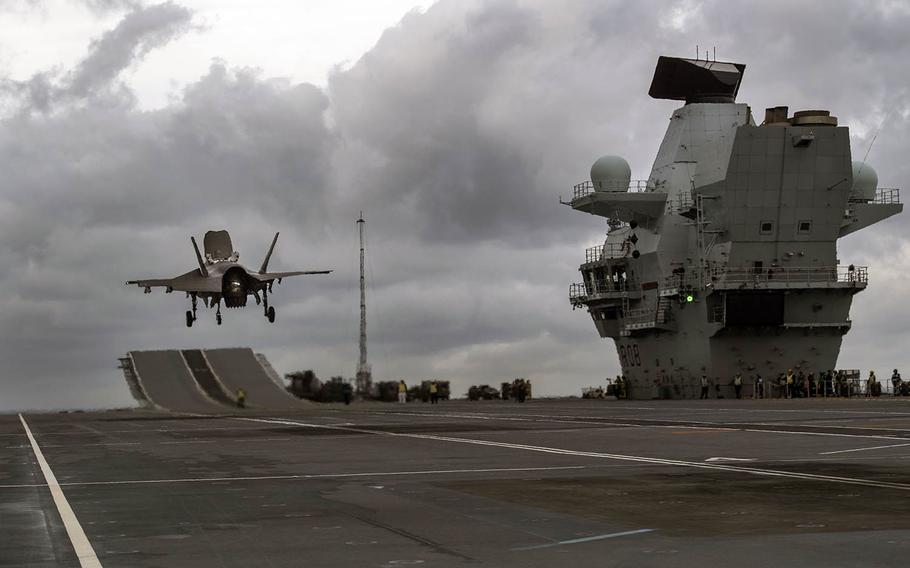 A U.S. F-35 fighter hovers over the HMS Queen Elizabeth on Nov. 3, 2018, during integration trials aboard the carrier. (Brittany Machnicki/U.S. Navy)

The Queen Elizabeth will carry both British and American F-35 Lightning II fighter jets on upcoming patrols, Williamson said during a speech Monday at the Royal United Services Institute for Defense and Security Studies.

Williamson said the mission will include a patrol through the Pacific Ocean, where the U.S. has been conducting freedom-of-navigation operations within 12 nautical miles of the Spratly and Paracel island groups in the South China Sea, both claimed by China.

“The first operational mission of HMS Queen Elizabeth will include the Mediterranean, Middle East and the Pacific – making Global Britain a reality,” Williamson said, according to the U.K. Ministry of Defense.

In January, the U.S. and British navies conducted their first joint military exercise in the South China Sea since Beijing began militarizing islands and reefs there. The guided-missile destroyer USS McCampbell and the frigate HMS Argyll worked together Jan. 11-16, 7th Fleet officials said at the time.

The navies “conducted communication drills, division tactics and a personnel exchange designed to address common maritime security priorities, enhance interoperability and develop relationships that will benefit both navies for many years to come,” according to a 7th Fleet statement.

Interoperability refers to a country’s ability to use another military’s equipment and training methods.

The Navy, Royal Navy and Japan Maritime Self-Defense Force also worked together on an anti-submarine warfare exercise Dec. 21-22 in the Pacific.

Britain has shown increased interest in the Pacific over the past year, conducting a freedom-of-navigation operation in the region in August when the amphibious assault ship HMS Albion sailed near the Paracel island chain, irking China. It was the first time for the U.K. to complete such a mission in the South China Sea in recent history.

Williamson during his speech Monday also spoke about the importance of the U.K.’s alliance with the United States.

“Our relationship with the United States will continue to be one of the closest,” Williamson said, according to the institute. “There are also opportunities for Britain to lead and bring alliances together. We should look at doing that increasingly in the years ahead.”

“The UK’s global leadership, underpinned by a capable military, makes the world safer for the US and our allies,” Shanahan tweeted. “I look forward to discussing with Gavin Williamson this vision, our strong U.K.-U.S. relationship, and our firm commitment to NATO, this week at the NATO Defense Minister’s meetings.”

Information about when the HMS Queen Elizabeth will deploy were not available Wednesday.