US embassy to challenge Germany over attempts to tax American troops 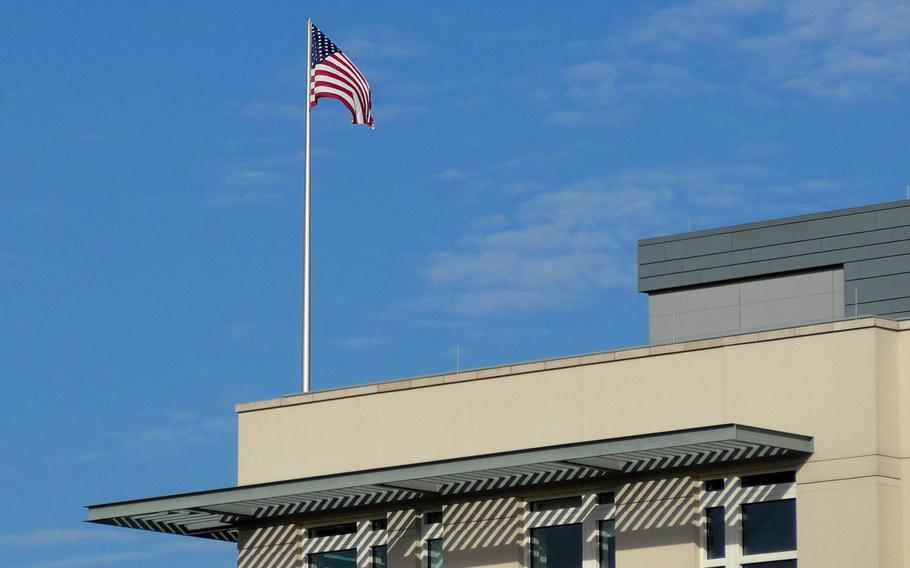 The American flag flies over the U.S. embassy in Berlin, Germany. The embassy is getting involved in a dispute with Germany over whether troops and Defense Department civilians who have NATO Status of Forces Agreement protections, are obligated to pay German taxes. (Michael Abrams/Stars and Stripes)

STUTTGART, Germany — Germany is violating an international treaty when it asks U.S. military personnel to pay taxes in the country, the U.S. Embassy in Berlin said as it jumped into a long-running fiscal dispute that has affected hundreds of U.S. troops and civilians.

The U.S. Embassy and military commands “are aware of this long-standing issue and working closely in concert to address what we believe to be a misinterpretation of the NATO Status of Forces Agreement,” embassy spokesman Joseph Giordono-Scholz said in a statement this week.

“The Department of Defense and Department of State are engaged to try and reach a resolution,” Giordono-Scholz said, giving the first indication that the issue is being tackled at a higher level than military commands in Germany, which have been unable to resolve it after years of trying.

State and Defense Department lawyers are hashing out the details of a plan that will be turned over to the embassy for action in the weeks ahead, a State Department official told Stars and Stripes this week.

The involvement of senior U.S. officials comes after Stars and Stripes earlier this year spotlighted how Germany has threatened to impose hefty tax penalties — some in six figures — on troops and civilians who it says have special ties to the country. It’s aimed at getting the German federal government to issue guidance that would stop regional tax offices from levying taxes on Americans living in the country with SOFA protections, military officials have said.

The NATO Status of Forces Agreement is intended, among other things, to protect military personnel, who already pay taxes in the U.S., from having to also pay it in Germany on their military pay.

But some local fiscal offices in Germany maintain they have a right to tax personnel who aren’t in the country “solely” for their jobs.

They have argued that a service member or Defense Department civilian who extends their tour, marries a local person or does anything else that suggests special ties to Germany could be liable for taxes on all military pay they’ve received while in Germany, including back pay. Benefits such as housing allowance have been factored into the tax bills, said tax experts and a German defense attorney who has taken on some military cases.

To avoid being taxed, service members and civilians must prove to German authorities a “willingness to return” to the U.S. But there is no established legal standard that defines what constitutes a willingness to return and German tax offices decide on a case-by-case basis if they will waive or impose taxes on someone.

The ultimate proof of intent to leave — actually returning to the U.S. — doesn’t necessarily offer protection from German regional finance offices, which have sought taxes dating back 10 years and pursued U.S. personnel after they have returned home.

U.S. Army Europe, which manages SOFA matters in Germany, has known about the severity of the problem since at least 2014, when an Army PowerPoint presentation about host-nation relations noted that around 100 civilians and active-duty troops were in financial difficulty after receiving tax bills from the Germans.

Today, nearly 500 people with military ties are under investigation in the Landstuhl area, where thousands of Americans who are assigned to Ramstein Air Base and several Army bases live, the local tax office said in July. Military members in other regions, including Stuttgart and Wiesbaden, also have been targeted.

In the 2014 document, USAREUR said the personal nature of the issue meant “the ability of the command to influence the outcome is limited.”

It also said that, as a “last resort,” the U.S. Embassy in Berlin could be called in to organize “inter-governmental talks” on the issue.

It’s unclear if the growing number of Americans with SOFA status who are being threatened with tax bills was the trigger for that last-resort solution, but six years later, the high-level talks seem to be on the brink of happening.