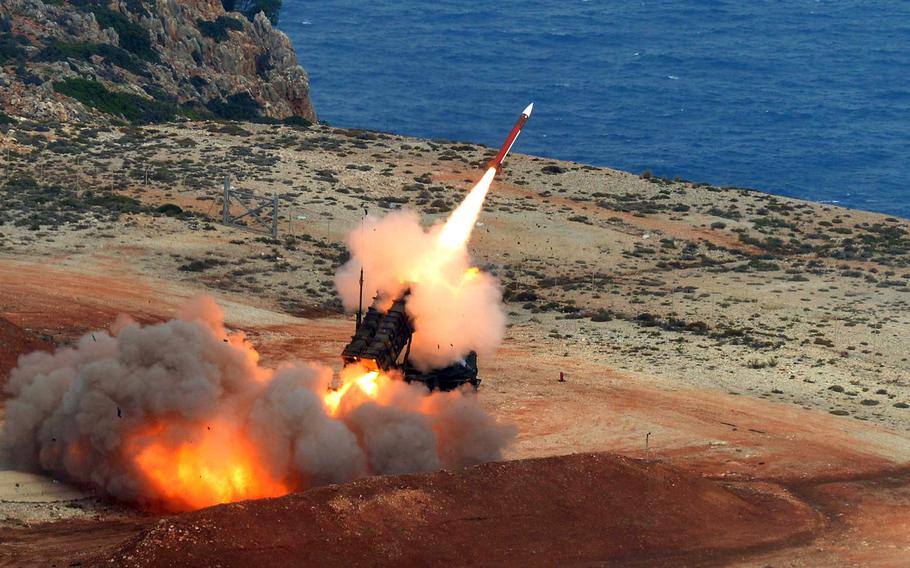 Buy Photo
A Patriot missile bursts out of its launcher at the NATO air missile firing installation outside Chania on the Greek island of Crete in 2015. U.S. soldiers will man German Patriot systems during live fire drills that kicked off Nov. 12, 2020. (Michael Abrams/Stars and Stripes)

About 250 troops from the U.S., Germany, Greece and the Netherlands are taking part in the air defense operations at NATO’s firing range on the Greek island of Crete, military officials said.

“This type of training ensures that U.S. (air and missile defense) forces and NATO forces are integrated, able to operate together and ready to respond to any threat from all directions,” Col. Bruce Bredlow, 10th Army Air and Missile Defense Command’s deputy commander, said in a statement Thursday as training got underway.

The 678th Air Defense Artillery Brigade, based out of South Carolina and on a nine-month rotation in Europe, is serving as the command and control element for the drills, which seek to “enhance the combined U.S. and European ability to control defensive fires in Eastern Europe,” the Army said in a statement.

In a twist this year, troops with the 10th Army Air and Missile Command are using the German missile variant instead of their own familiar Patriot system.

The goal of the swap is to demonstrate flexibility, 10th AAMC spokeswoman Capt. Rachel Skalisky said in a statement.

Greece also deployed Patriots for the drills, which are scheduled to continue until Nov. 27.

Bolstering air defense capabilities has been a key part of the Army’s buildup on the Continent over the past few years. The service determined in 2017 that it needed to do more to enhance its long- and short-range air defense arsenal.

Reestablishing such weaponry, a mainstay during the Cold War, in Germany became a priority after Russia’s 2014 military intervention in Ukraine.

Since then, USAREUR units have added systems such as M270A1 self-propelled multiple rocket launchers, which have a top range of more than 100 miles.