Ukrainian troops to serve with NATO training mission in Iraq 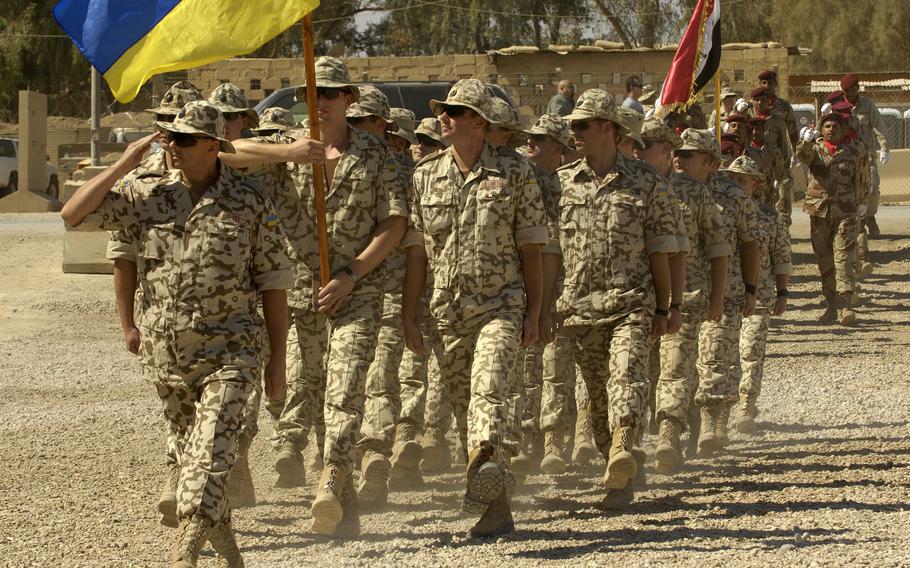 Ukrainian soldiers march past the parade grandstand during a pass and review at Camp Echo, Iraq in 2008. Ukraine plans to send 20 troops to support NATO?s mission in Iraq when the alliance resumes work in the country. (Matthew Plew/U.S. Air Force)

Ukraine plans to send 20 troops to Iraq to support the NATO training mission once the alliance resumes the work it put on hold as tensions between the U.S. and Iran escalated in recent weeks.

“The invitation to become an operational partner of the Alliance’s mission in Iraq testifies to recognition of the value of Ukrainian military experience and professionalism,” Ukraine’s deputy prime minister for European and Euro-Atlantic integration, Dmytro Kulebo, said in an online statement.

The alliance’s noncombat training mission in Iraq comprises about 500 troops and is separate from a much larger U.S.-led coalition effort to train, advise and assist Iraqi forces battling the Islamic State group in the country.

Many of the Canada-led NATO mission’s troops were relocated to Kuwait amid safety concerns after tensions skyrocketed in Iraq following the killing in Baghdad by the U.S. of Iranian Maj. Gen. Qassem Soleimani, which drew threats of retaliation from Tehran.

Last week, as more than a dozen Iranian missiles fell on bases hosting U.S. and coalition forces in Iraq, air defense forces outside Tehran shot down a Ukrainian airliner shortly after takeoff from the city’s airport, killing all 176 people aboard.