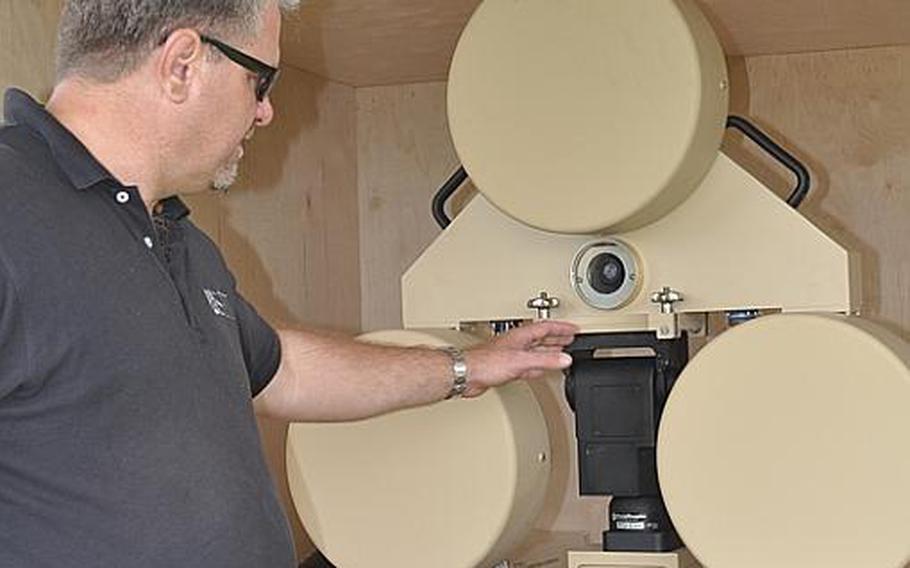 Buy Photo
Jeff Lau, project manager for SET Corp., shows off the CounterBomber, a system that can detect suicide vests and other weapons under a person&#39;s clothing from a distance. It emits low-level radar beams that bounce off a subject and are analyzed by software. (Seth Robbins/Stars and Stripes)

Buy Photo
Jeff Lau, project manager for SET Corp., shows off the CounterBomber, a system that can detect suicide vests and other weapons under a person&#39;s clothing from a distance. It emits low-level radar beams that bounce off a subject and are analyzed by software. (Seth Robbins/Stars and Stripes) Buy Photo
Soldiers from the 170th Infantry Brigade Combat are taught how to use software with the Counterbomber, a radar system that can detect suicide vests and other weapons under people&#39;s clothing. Baumholder-based soldiers are the first Army unit to be trained on the device. (Seth Robbins/Stars and Stripes) 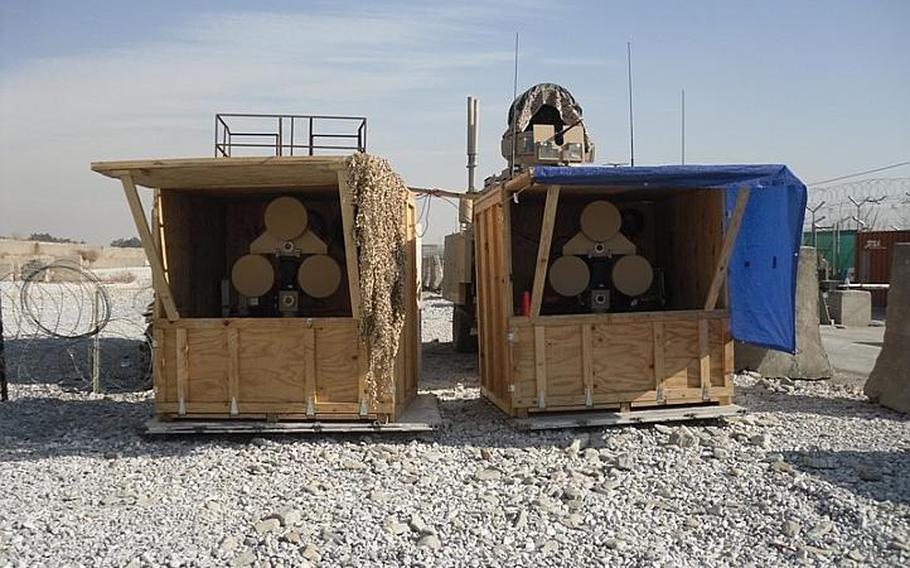 The CounterBomber system is already being used in Afghanistan. It scans nearly 1,000 people a day at Bagram Air Base. ()

BAUMHOLDER, Germany&mdash;The Army is training troops on a new radar system that lets soldiers see what they normally can&rsquo;t: bombs and other weapons hidden beneath clothing.

But a Virginia congressman is asking why the Army is gearing up to use it only now.

The system, called the CounterBomber, was designed to detect potential suicide bombers at base entrances in Iraq and Afghanistan. At Bagram Air Base, the Air Force uses it to scan nearly 1,000 people each day, said Jeff Lau, project manager for Virginia-based SET Corp, which developed the CounterBomber.

The Marines also use the system, but the Army has been slow to follow suit. The Army had been waiting for feedback from the other branches before using it themselves, an Army spokesman said.

The system works this way: Two video cameras track people walking at a distance of between 50 and 150 yards while low-level radar beams are directed at them. People are asked to walk toward and away from the system.

The reflected beams are analyzed by software for signs of bombs or other weapons beneath the clothing. When the software detects a potential bomber, a red circle appears on the computer screen and a horn is sounded. When the computer finds nothing, it displays a green circle and chimes.

The system is quite sensitive, alerting on one man who was wearing a lower back brace, Lau said.

Though the system won&rsquo;t help to stop suicide bombers who run at the gate entrance&mdash;at that point, Lau said, the person is already deemed a threat&mdash;it allows soldiers to search for potential bombers from a safe distance and helps ensure that one won&rsquo;t make it onto the base. It takes only seconds to make a decision.

The Marines first started using the CounterBomber, which costs about $300,000 per unit, two years ago, Lau said.

It has been used in Helmand province, Afghanistan, as well as at Al-Asad Air Base and Camp Ramadi in Iraq.

But getting Army units trained and using the system in Afghanistan has taken some time, according to a transcript from a House committee hearing late last March. During the hearing, Rep. Jim Moran, D-Va., questioned Gen. George Casey, chief of staff of the Army, as to why the system, had not yet made it into the hands of soldiers. At the time, Casey did not give a reason.

Moran said the CounterBomber, which was rigorously vetted in 2009 at the White Sands Missile Range in New Mexico, is the only system that can automatically detect suicide vests while troops remain at a safe distance.

Lt. Col. Jimmie Cummings, an Army spokesman, said that those dozen CounterBomber systems were purchased by the Joint Improvised Explosive Device Defeat Organization and then marked for use by the Army. Cummings said the Army&rsquo;s Rapid Equipping Force recently bought one CounterBomber system that will be deployed in July and the Army has used other weapons detection systems in the past.

Soldiers with the 170th Brigade Combat team last week became the first members of the Army to train on the system, huddled around two computers in Baumholder as they were taught the intricacies of setting up the system. They will undergo training for three weeks and use the system when they deploy early next year to Afghanistan.

Capt. Karl Gunther, of 3rd Battalion, 4th Infantry Regiment, said he was impressed with how the complicated technology came with a simple software interface: the red and green circles and the noise alerts are reminiscent of the fictional software in action movies.

&ldquo;You could teach any soldier how to use this,&rdquo; said Gunther, whose pocketknife was detected during a test walk.

Unlike the new electromagnetic scanners being tested at airports, the system does not create an image of the person naked. Gunther said the system allows soldiers to respect the privacy of Muslim men and women who are uncomfortable with pictures or being frisked by members of the opposite sex.

With this, &ldquo;a person is just walking,&rdquo; Gunther said. &ldquo;They may not even be aware they are being scanned.&rdquo;