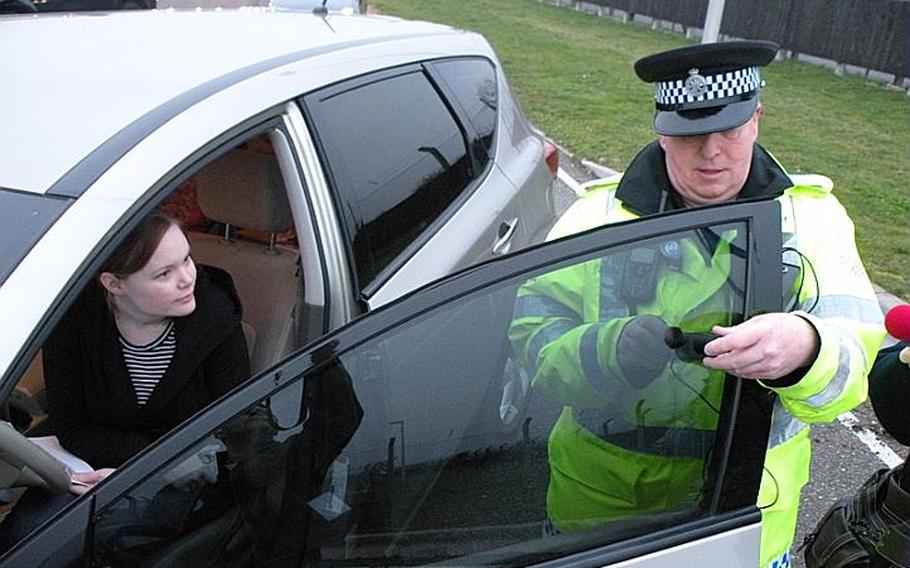 Buy Photo
Police Constable Paul Glover with the Ministry of Defence police department at RAF Mildenhall checks the level of tint on the car of Melissa McKenzie at the main gate of RAF Mildenhall, England. Authorities in Suffolk County are conducting a 30-day amnesty program to allow people with excessively tinted windows to get them checked free of penalty. Glover found McKenzie's window tint to be too dark and above the legal limit of 30 percent tint. (David Hodge/Stars and Stripes)

RAF MILDENHALL, England &mdash; British authorities in Suffolk County are asking Americans stationed in England to have their vehicles checked for excessive window tint before Wednesday.

Officials from the U.K.&rsquo;s Ministry of Defence are offering free checks to servicemembers, family members and civilians at RAF Mildenhall and RAF Lakenheath to ensure compliance with the local law. Authorities say recent accidents involving cars with heavily tinted windows have caused concern about road safety.

&ldquo;It&rsquo;s like putting on sunglasses and trying to drive the car around at night,&rdquo; said Police Constable Paul Glover, an MOD officer.

Glover said he stopped 45 offenders in one hour at the main gate of RAF Lakenheath on a recent morning. And, he said, there were plenty others going past while he had vehicles stopped. Since there are two gates for each base, Glover said estimates that at least 200 vehicles with excessive tint traveled onto base during this morning period.

&ldquo;That would be a very, very low minimum,&rdquo; Glover said.

After the amnesty, offenders may receive an on-the-spot fine or be asked to take off the tint in the officers&rsquo; presence, Glover said. Police can impound the vehicle until the problem is fixed.

The fine ranges from 30 pounds (about $49) to 60 pounds, with three points added to the driver&rsquo;s license.

In the U.S., the allowable amount of window tint varies by state, but in England the legal limit is often less. Since 1986 in the U.K., the &ldquo;Road Vehicles (Construction & Use) Regulations 1986&rdquo; law has governed tint on windows by regulating the amount of light transmitted through the glass. The windshield and front side windows must allow light to pass through at 75 percent and 70 percent, respectively. There is no legal limit regarding back side windows or the rear window.

Senior Airman David Sigers of RAF Lakenheath said he assumed his car was legal because it passed its Ministry of Transport test &mdash; an annual check to ensure a car functions properly.

But according to Glover, MOT test centers do not test the level of window tint.

Sigers, a native of Cache, Okla., acknowledged that his car was likely over the legal limit but said he&rsquo;s never had a problem seeing out of his car at night on the roads around the bases, and that he&rsquo;d be upset if he had to remove it.

The Suffolk police decided to promote awareness of the issue late last year after a spate of traffic fatalities where excessive tint was thought to have contributed to the accidents, said Glover. No Americans were involved in any of those accidents, he added.

The amnesty program was promoted in local British newspapers throughout the county, but many Americans never knew about it.

Although safety is a major concern, Glover said, dark window tint can also be a security risk for law enforcement agents: &ldquo;It&rsquo;s like looking into a black box.&rdquo;

&ldquo;Getting rid of window tint,&rdquo; said Tech. Sgt. Shaun Yuenger of RAF Mildenhall, &ldquo;would be enough of a benefit for officers to be able to look inside the vehicle to see if someone has a weapon.&rdquo;

Glover recommends removing the tint yourself by peeling it off. Acetone or goo remover should get rid of any residue.

A check of local garages found the process can take about an hour and cost at least $55.