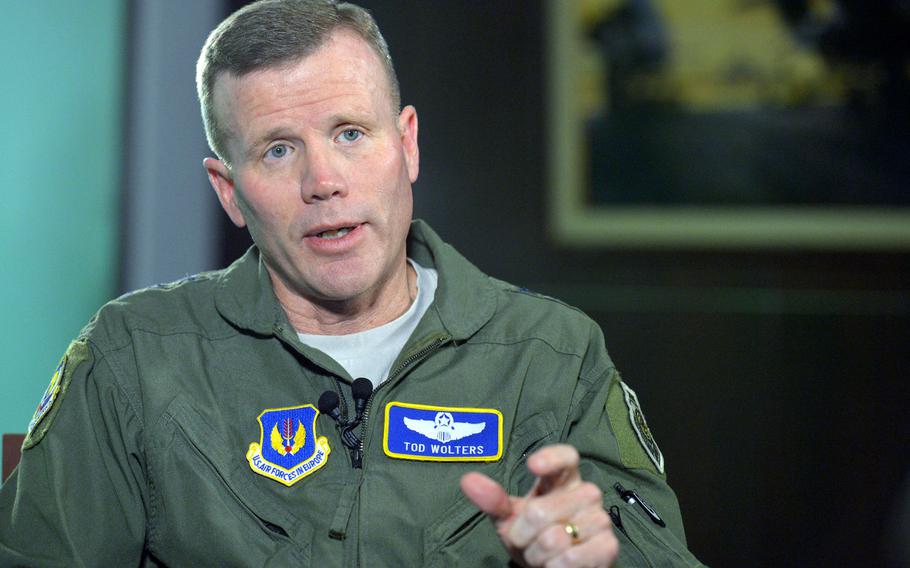 Gen. Tod Wolters answers questions on Oct. 4, 2016, at Ramstein Air Base, Germany, where he served as U.S. Air Forces in Europe commander. The White House announced on Friday, March 15, 2019, that Wolters has been selected to become the next commander of the U.S. European Command. (Michael Abrams/Stars and Stripes)

WASHINGTON – The White House on Friday tapped an Air Force general with experience overseeing all U.S. and NATO air forces throughout Europe to lead U.S. European Command and serve as Supreme Allied Commander.

President Donald Trump selected Air Force Gen. Tod D. Wolters to serve as the top American commander in Europe and lead all NATO forces on the continent, replacing Army Gen. Curtis Scaparrotti, who is set to retire from the service in the coming months after serving as EUCOM chief since May 2016. Wolters must be confirmed by the Senate before assuming the new role.

Wolters now serves as commander of U.S. Air Forces in Europe – Air Forces Africa based at Ramstein Air Base in Germany. In his role, he also serves as the chief of NATO’s Allied Air Command. He has served in that position since August 2016.

Experience from his current command should be good preparation for Wolters to assume the challenges facing the top military commander in Europe – chiefly among them commanding operations alongside NATO and partner nations in Eastern Europe to deter Russian aggression. In addition, Wolters would likely be tasked with reassuring NATO allies of the U.S. commitment to the alliance that has, at times, been maligned by Trump, who has pushed for other nations to spend more money on defense.

Wolters would not be the first general to move from commanding air forces in Europe to the top military job there. Scaparrotti’s immediate predecessor, Air Force Gen. Philip Breedlove, made that transition in May 2013 before serving as EUCOM commander and Supreme Allied Commander for three years. Scaparrotti took the job after serving as the chief of U.S. Forces Korea.

Wolters is a command-rated fighter pilot who has flown more than 5,000 hours through his nearly 32-year military career, according to his Air Force biography. He has flown multiple aircraft including the F-15C Eagle and the stealthy F-22 Raptor fighter jets as well as the A-10 Thunderbolt II attack jet and the now-retired OV-10 Bronco turbo-prop attack plane.

He is a 1982 graduate of the U.S. Air Force Academy and a veteran of combat operations in Afghanistan and Iraq, where he served during Operation Desert Storm and later during Operation Iraqi Freedom.

If confirmed, Wolters would oversee the more than 60,000 American troops serving throughout Europe at duty stations in countries including Germany, Italy and Spain and on temporary rotations across the continent.

In addition to the training mission throughout Eastern Europe aimed at ensuring cohesive operations with the militaries of partner nations in case of a Russian advance into NATO territory, top leaders are considering permanently stationing troops in Poland, which has offered some $2 billion to build a permanent American base on its soil.

Scaparrotti this week endorsed permanently basing some forces in Poland to command larger units rotating through the country on training assignments.

Another issue facing Scaparrotti’s successor is the U.S. relationship with NATO ally Turkey. The Pentagon warned this week that if Turkey purchases the Russian-built S-400 air defense system Turkey would not be allowed to receive the advanced F-35 fighter jets that it has purchased. Turkey’s leaders have vowed to purchase the Russian system.

This month, Scaparrotti has also asked Congress for more rotational forces in Europe, including a beefed up Naval presence and more intelligence, surveillance and reconnaissance assets.