President Andrzej Duda of Poland and President Donald Trump during a meeting in New York, Monday, Sept. 23, 2019, in a screen shot from the White House Twitter account. (Twitter/The White House)

President Andrzej Duda of Poland and President Donald Trump during a meeting in New York, Monday, Sept. 23, 2019, in a screen shot from the White House Twitter account. (Twitter/The White House) 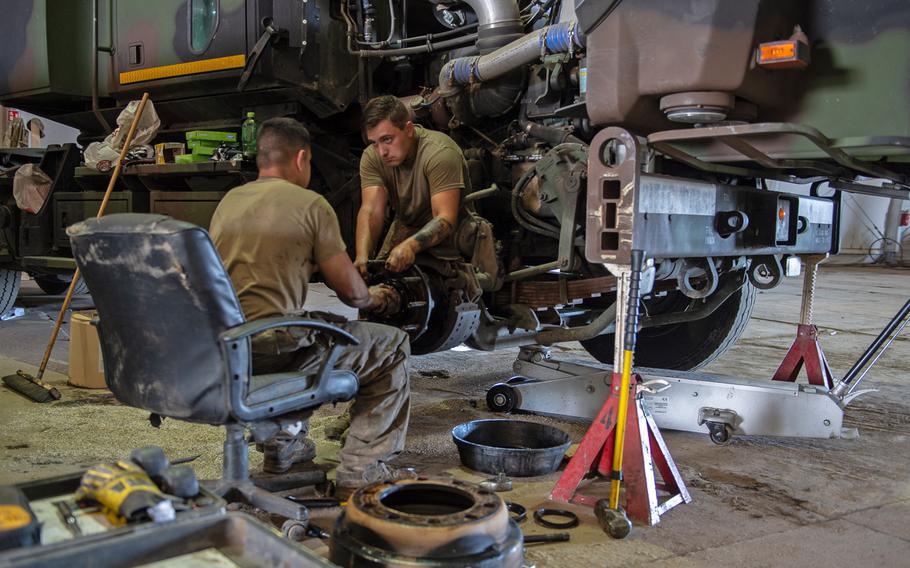 Spc. Sean Hrab, right, and Pfc. Jose Orozzo work on the wheel assembly of a vehicle in the motor pool on a military base in Powidz, Poland, Aug. 27, 2019. President Donald Trump said Monday, Sept. 23, 2019, that his recent decision to increase the number of troops in Poland was driven by his warm regard for Polish President Andrzej Duda. (Brian Ferguson/Stars and Stripes)

STUTTGART, Germany – President Donald Trump said his recent decision to increase the number of troops in Poland wasn’t a military imperative to counter Russia but the result of his warm regard for Polish President Andrzej Duda.

“I think it’s just because we have a president of Poland who I like, who I respect. And he asked whether or not we’d be willing to do that,” Trump said Monday during a joint news conference with his Polish counterpart.

Trump and Duda signed a cooperation agreement Monday that paves the way for the U.S. military presence in Poland to be expanded.

The deal was signed on the sidelines of the annual U.N. General Assembly, which Trump and Duda were attending in New York.

Details of future deployments to Poland are still being worked out, Trump said, but “Poland has borne the expense.”

Warsaw has pledged to spend up to $2 billion to host American troops on a permanent basis, but the U.S. already has spent millions on military infrastructure projects in Poland and on troops rotations over the past five years, designed to strengthen NATO’s eastern flank.

Secretary of State Mike Pompeo said Monday that he expected the “full document” on the new deal between the U.S. and Poland to be released soon.

“You can see all the hard work that both our teams have done,” Pompeo said.

Trump’s preference is for any troop increase in Poland to come from other parts of Europe “as opposed to new troops going over there,” the American president said Monday.

While Trump said the Poles would be “building us facilities that I’m sure will be very beautiful,” there is no indication that any sort of mega-base is in the works for servicemembers. More likely, there will be an incremental buildup of troops in locations where the U.S. military already operates.

U.S. soldiers and airmen are currently at numerous sites in Poland including a small Army headquarters Poznan, a logistics hub in Powidz and drone, missile defense and special operations missions in other parts of the country.

“We’re going to be cooperating in so many different ways, and militarily, primarily,” Trump said.