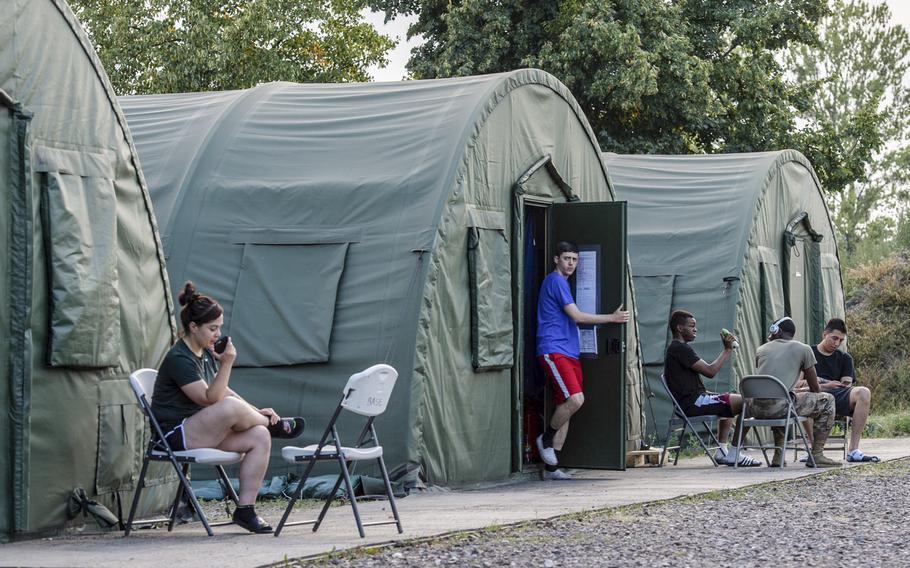 Soldiers relax in a tent city after work on a military base in Powidz, Poland, Aug. 27, 2019. The tent city and an old dorm house almost 1,100 U.S. military personnel on the installation. (Brian Ferguson/Stars and Stripes) 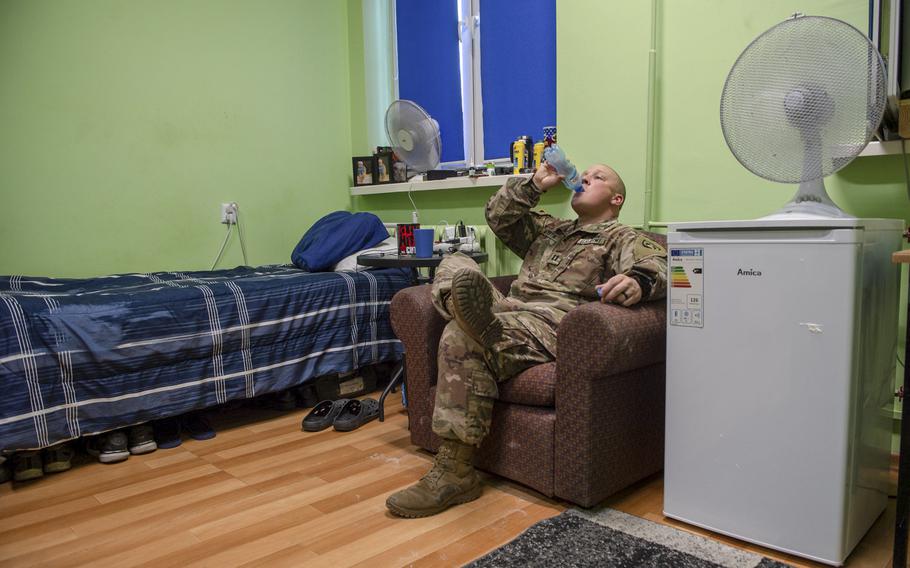 Capt. Dustin Martin, the base mayor, sits in his dorm room on a military base in Powidz, Poland, Aug. 27, 2019. He shares the room with two other soldiers. (Brian Ferguson/Stars and Stripes) 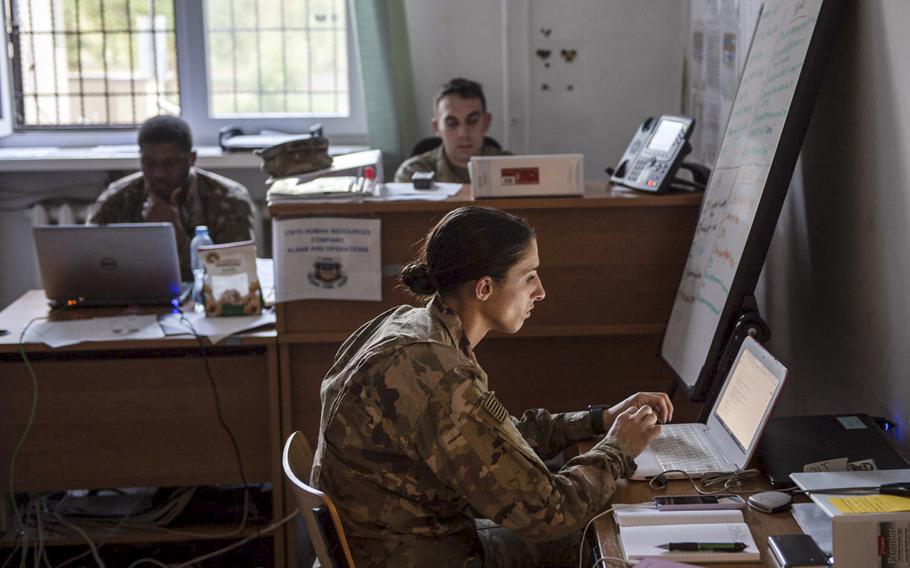 First Lt. Veronica Smith, human resources executive officer, works on her computer in the command building on a military base in Powidz, Poland, Aug. 27, 2019. The first floor of the building is offices while the second and third floors are dorm rooms. (Brian Ferguson/Stars and Stripes) Games fill a bookshelf at the Morale, Welfare and Recreation tent on a military base in Powidz, Poland, Aug. 27, 2019. (Brian Ferguson/Stars and Stripes) Spc. Sean Hrab, right, and Pfc. Jose Orozzo work on the wheel assembly of a vehicle in the motor pool on a military base in Powidz, Poland, Aug. 27, 2019. (Brian Ferguson/Stars and Stripes) From left, Sgt. Jason Cho, Spc. Joseph Salas and Sgt. Jennie Banks from the 1st Infantry Division sit in front of a newly constructed building on a Polish military base in Poznan, Aug. 28, 2019. (Brian Ferguson/Stars and Stripes) 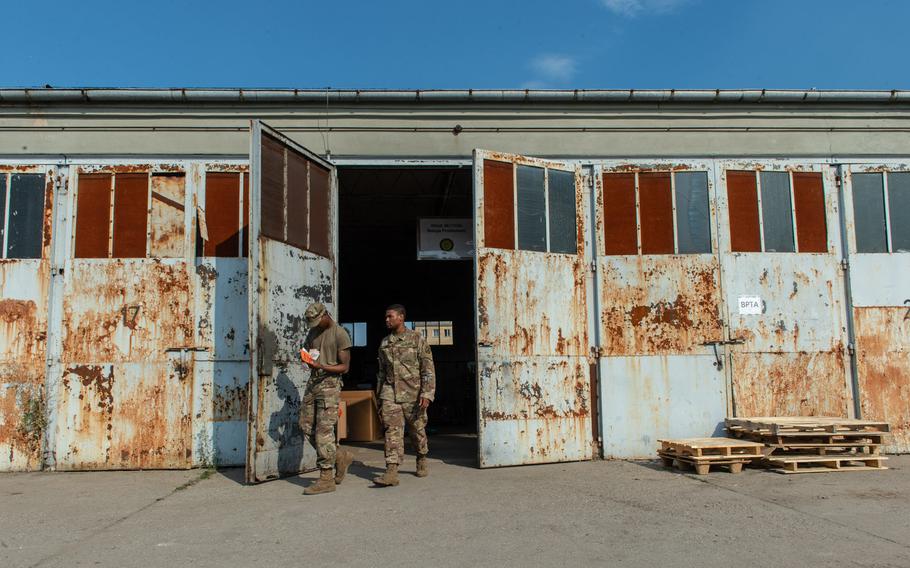 Soldiers walk out of the supply support activity on a military base in Powidz, Poland, Aug. 27, 2019. (Brian Ferguson/Stars and Stripes) Rotational soldiers gather at a park bench on a military base in Powidz, Poland, Aug. 27, 2019. Deployments to the base generally last up to nine months. (Brian Ferguson/Stars and Stripes) 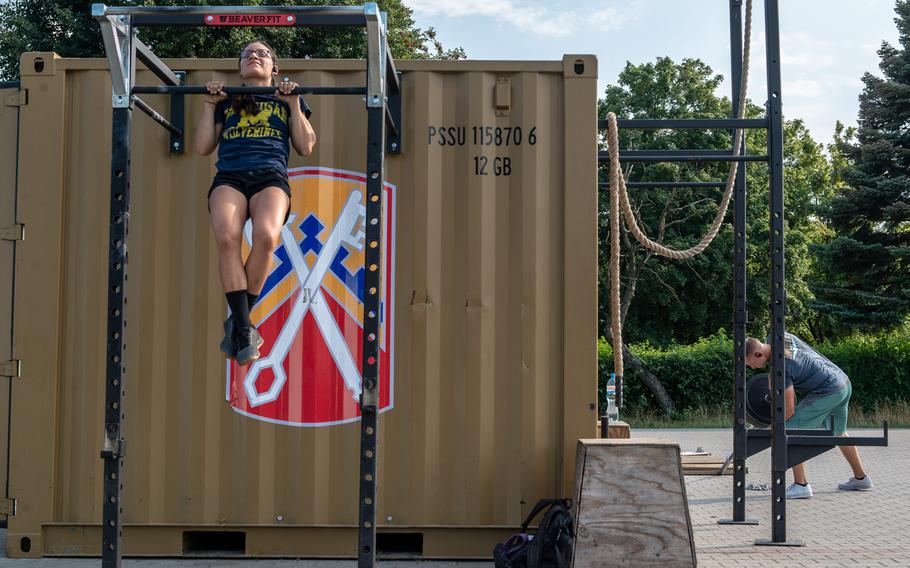 Sgt. Lauren Meza does pullups while Maj.Joshua Rookus lifts weights on a military base in Powidz, Poland, Aug. 27, 2019. The soldiers deployed to the base are on rotations lasting up to nine months. (Brian Ferguson/Stars and Stripes)

POZNAN, Poland — Months after Washington and Warsaw agreed to boost the number of U.S. troops in Poland, questions remain about where they will come from, how many will eventually arrive and how long they will live in conditions that remind them of combat deployments.

Poland has grown in strategic importance as Russia’s military strength has increased, potentially posing a threat to nearby NATO member states in the Baltic. The theme of military preparedness is likely to be repeated this weekend in Warsaw when the Poles host an international gathering to mark the 80-year anniversary of the outbreak of World War II.

While dignitaries including Vice President Mike Pence attend the ceremonies in Warsaw, U.S. troops at Powidz, a base about 160 miles to the west, will be living in a tent city with spotty internet service, water coming out of faucets at a trickle and a chow hall that serves ample field rations.

In summer, soldiers at Powidz, a logistics and aviation hub for American military personnel training in Eastern Europe, say they’d rather be in the air-conditioned tents than the hot barracks building, which doubles as work space.

“In terms of living and working, it feels a lot like an immature deployment,” said Army 1st Sgt. Sean Jones, the first sergeant for 1st Squadron, 6th Cavalry Regiment, an Apache unit out of Fort Riley, Kan., which is at Powidz for a nine-month rotation.

“Of course, we are prepared to go to an austere environment and fight the enemy and train or whatever else,” he said. “But this is a rotation, not a deployment.”

At Poznan, American troops are hosted at a small base in the historic city, with a metro area of over 1 million and a large population of college students who speak English well. Air conditioning is being installed on base for some 80 soldiers who live and work in an old concrete building.

Buildings are being renovated to house soldiers and provide them with places “to do our jobs and protect forces in the area,” said Maj. Jon Allen, a spokesman for the Mission Command Element, a headquarters based in Poznan that oversees rotational forces in Europe.

But before major infrastructure projects begin, “we need to know how many people are going to be in which places on a permanent basis,” Allen said.

It’s still uncertain if the Pentagon will establish a division headquarters at Poznan or elsewhere in Poland.

The U.S. mission already includes a rotational Army armored brigade, a U.S.-led multinational NATO battle group positioned near the Russian military exclave of Kaliningrad and an Air Force detachment at Lask. A small contingent of sailors are at Redzikowo, a northern Polish town near the Baltic coast, where work on a missile defense site continues.

Experts say the presence of U.S. forces in Poland can deter Russia, which countries in Eastern Europe and the Baltic region have eyed warily since it seized Crimea from Ukraine in 2014.

“The U.S. would be in position to introduce its forces into a crisis area and then Russia would have to make the choice of killing American soldiers if it wanted to go to war, and that would have huge political consequences,” Michael Kofman, a Wilson Center fellow, said in a phone interview.

Where an additional 1,000 troops that the U.S. will deploy to Poland will come from, a decision announced in June, is also up in the air.

U.S. diplomats and officials have suggested they may come from Germany. The U.S. ambassador to Germany and others have criticized Berlin for not meeting a NATO target calling for each alliance member to spend 2% of gross domestic product on defense by 2024.

Pulling troops from Germany and placing them in Poland “would be a real mistake,” said retired Lt. Gen. Ben Hodges, the former commander of U.S. Army Europe.

“Germany is our most important ally in Europe,” Hodges said by phone. Bases provided to the U.S. in Germany allow the American military to forward deploy from halfway around the world, he said.

“To be able to replicate the quality of training facilities, maintenance facilities … plus, by the way, our dependence on civilian employees ... working in Europe, you can’t just pick them up and move them,” Hodges said.

Hodges added that he does support rotating noncombat troops into Poland and he has long advocated for infrastructure improvements in Eastern Europe to aid allied military movements.

Big plans and a big lake

For now, many of the projects in Poland are designed to support military operations, not quality of life.

Outside Powidz, one of the largest airfields in Europe, a swath of forest has been cleared to make way for a NATO-funded $260 million storage site for tanks and other U.S. combat vehicles.

A diagram in Hepburn’s office details the plans, including moving the logistics operations area, “where everyone lives, eats, sleeps, does maintenance,” closer to the airfield with new facilities.

“I think there’s a commitment to it but no actual funds yet,” he said.

Army Capt. Dustin Martin, the 286th Combat Support Sustainment Battalion headquarters company commander and Powidz base mayor, said plenty of projects are underway, from improvements to the motor pool area to the front entry control point. “But nothing to improve the necessities,” he said.

Despite the challenges on post, servicemembers say they welcome the opportunity to experience a country that feels safe and seems to appreciate having Americans there.

The natural attractions and local food are also a draw.

Spc. Dominic Pisco, 25, civil affairs specialist with the Army Reserve 407th Civil Affairs Battalion, said the sailboat-dotted lake near the base in Powidz reminds him of home in Minnesota. He’s enjoyed trying pierogies and Zurek, a Polish rye soup with sausage and eggs.

He’s even managed to squeeze in a trip to Italy on a long weekend.

For Hepburn, who said he grew up as the Cold War was nearing an end, “It’s fascinating to be over here … in an area once behind the Iron Curtain. “It’s almost like history is repeating itself.”