Troop pullout from Germany likely to be quashed by Biden, analysts say 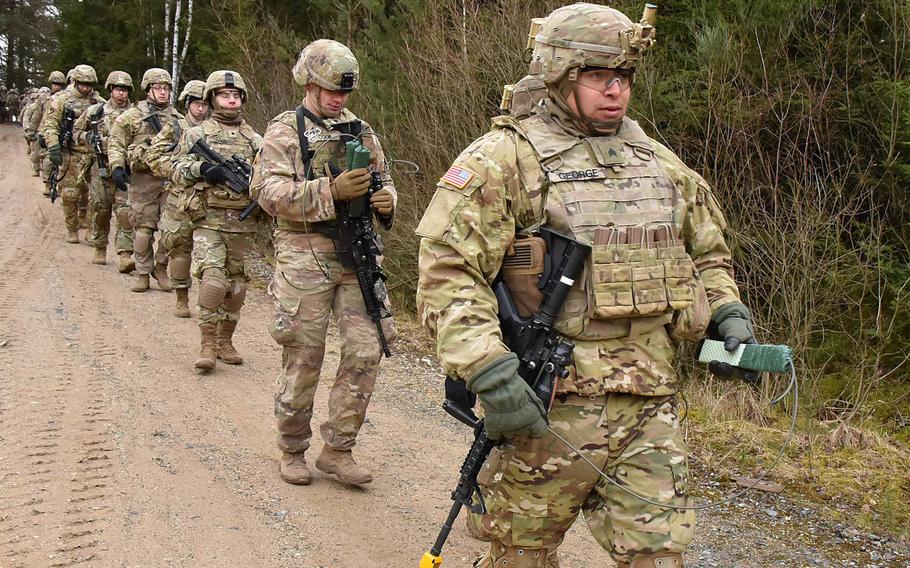 U.S. soldiers with the 2nd Cavalry Regiment move to the demolition range during qualification at Grafenwoehr Training Area, Germany, in February 2020. President-elect Joe Biden is expected, in one of his first military policy moves, to reverse the Trump administration's plan to withdraw troops from Germany. (Gertrud Zach/U.S. Army)

U.S. soldiers with the 2nd Cavalry Regiment move to the demolition range during qualification at Grafenwoehr Training Area, Germany, in February 2020. President-elect Joe Biden is expected, in one of his first military policy moves, to reverse the Trump administration's plan to withdraw troops from Germany. (Gertrud Zach/U.S. Army) 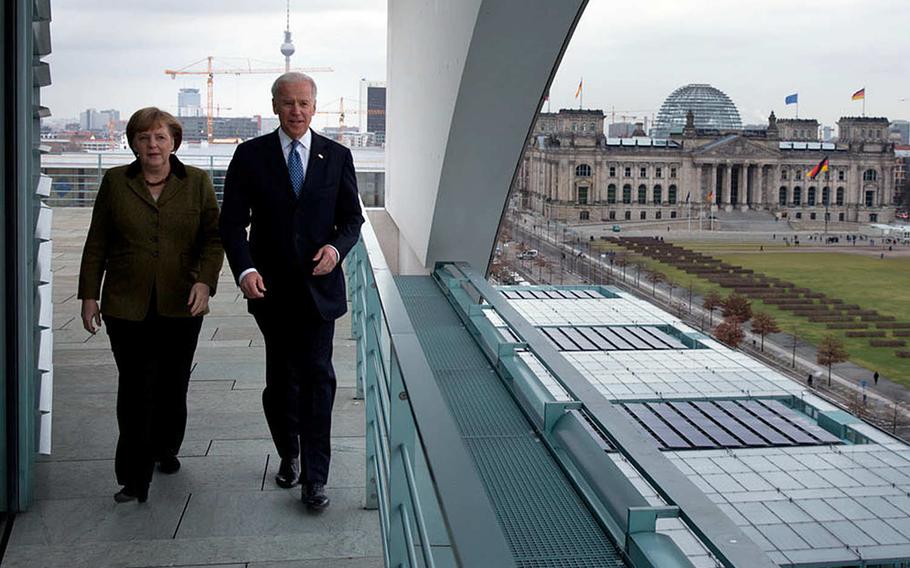 STUTTGART, Germany — President-elect Joe Biden is expected to kill the Trump administration’s plan to withdraw U.S. forces from Germany soon after taking office in January, in a move that would reset the NATO alliance after four years of tension with Washington, analysts said.

“I think that’ll be one of the most significant and quickest national security policy reversals come January 20, 2021,” said John R. Deni, a professor at the U.S. Army War College.

The proposal by President Donald Trump to pull some 12,000 troops out of Germany, moving some elsewhere in Europe and others to the U.S., was “short-sighted,” “fiscally irresponsible” and likely to be ineffective at getting Germany to pay more for its defense — the reason cited by Trump for calling for the troops to be relocated, Deni said.

A timeline for putting the plan into action was still in the works as U.S. European Command, itself slated to relocate from Germany to Belgium under the initiative, hashes out details.

But it could all be moot now, analysts said.

“One of the biggest changes in foreign policy that Joe Biden will make as president will be in U.S. policy on NATO,” said Jorge Benitez, a NATO expert with the Washington-based Atlantic Council.

“The Biden administration will reset and revive relations with our NATO allies,” he said.

Michele Flournoy, considered the front-runner to serve as defense secretary in a Biden presidency, has said Trump’s plan to pull thousands of troops out of Germany would cost more to implement than leaving them where they are.

“Our allies were completely surprised by this punitive troop withdrawal from Germany,” Flournoy said during the Aspen Security Forum in August.

Trump made low defense spending levels among European allies, especially Germany, the top issue in his dealings with NATO.

While Trump has taken credit for getting allies to step up spending during his tenure, critics have noted that it has risen annually since 2014, the year Russia annexed Crimea and invaded eastern Ukraine. That year, allies agreed that all members should meet the 2% spending level by 2024.

Ten of 30 members are projected this year to hit the alliance spending benchmark, a NATO report released last month said.

Spending is up significantly for only three members — Greece, the United Kingdom and the U.S. — who hit the target in 2014, the report said.

At a major NATO summit in Brussels in 2018, Trump threatened to quit the alliance over the issue, stoking fears that a second Trump term would spell the end of NATO.

“‘Someone said, ‘Sir! … would you leave us if we don’t pay our bills?’” the Atlantic Council quoted Trump as saying in Charleston, W. Va., in August 2018, a month after the summit. “‘They hated my answer. I said, ‘Yeah, I would consider it.’”

U.S. complaints about insufficient European investment on defense go back to NATO’s founding in 1949. But Trump has hammered at the issue more than any other U.S. president.

Biden is expected to take a different tack and tone than Trump, analysts said.

“I don’t expect President-elect Biden to continue using the 2% goal as a club to berate our allies like they’re a bunch of 5-year-olds, to tie U.S. willingness to defend an ally to whether that ally’s met the goal,” Deni said.

He will likely “return to the traditional U.S. approach of making strong arguments to our allies in private and avoid the public criticism and embarrassing statements made by Trump about NATO,” Benitez said.

NATO Secretary-General Jens Stoltenberg was among the first foreign leaders to congratulate Biden on Saturday when he was declared the winner of the election, describing the president-elect as a “strong supporter of NATO and the trans-Atlantic relationship.”

“U.S. leadership is as important as ever in an unpredictable world,” Stoltenberg said.