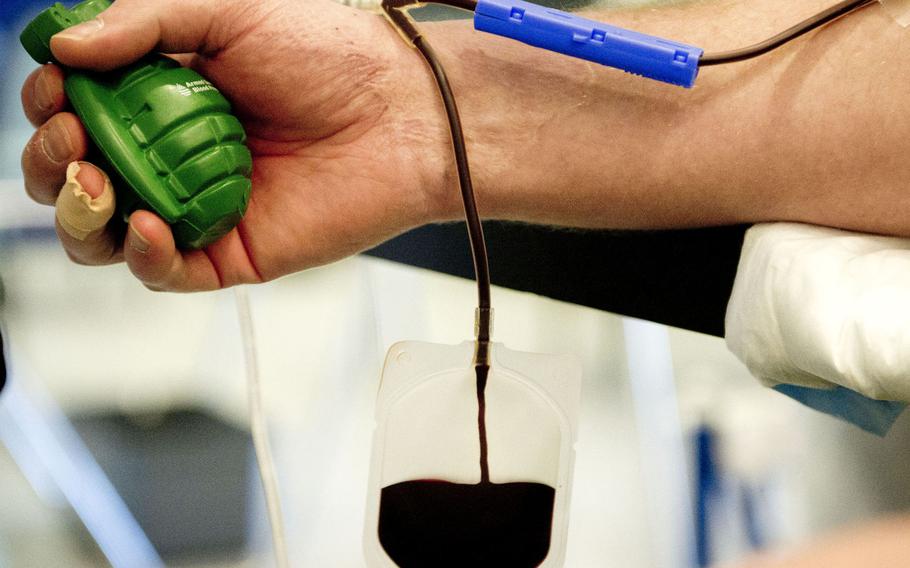 A service member donates blood at a drive at Ramstein Air Base, Germany, in 2018. The Food and Drug Administration has loosened restrictions on who can give blood, making potentially thousands more troops, veterans and retirees who have lived in Europe eligible to donate. (Stars and Stripes)

A service member donates blood at a drive at Ramstein Air Base, Germany, in 2018. The Food and Drug Administration has loosened restrictions on who can give blood, making potentially thousands more troops, veterans and retirees who have lived in Europe eligible to donate. (Stars and Stripes) 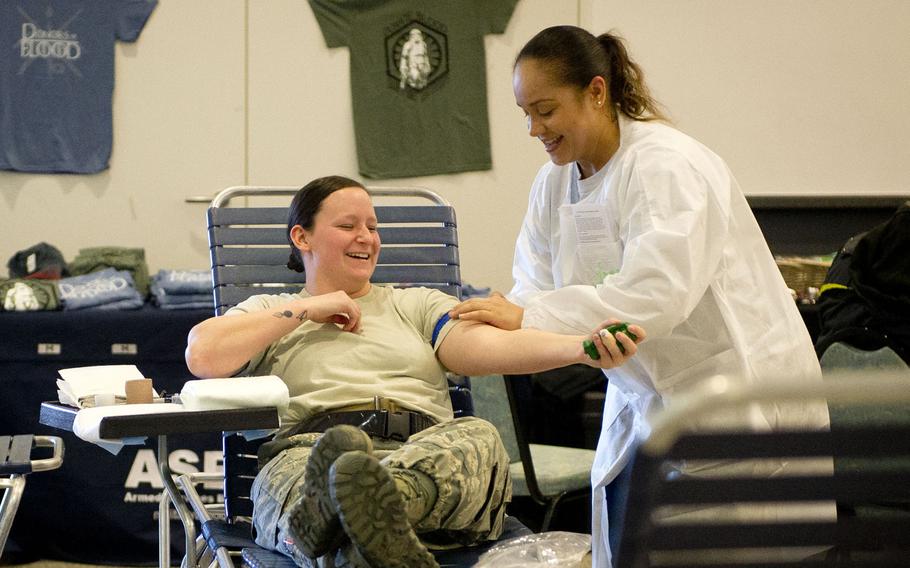 Lena Sapp, a medical technologist from Landstuhl Regional Medical Center, right, applies a tourniquet to Senior Airman Jordan Burge during a blood drive at Ramstein Air Base, Germany in February 2018. The Food and Drug Administration has loosened restrictions on who can give blood, making potentially thousands more troops, veterans and retirees who have lived in Europe eligible to donate. (Stars and Stripes)

KAISERSLAUTERN, Germany — Troops, veterans and military retirees who’ve lived in Europe for an extended period once again may give blood to the Defense Department’s program after donor restrictions were relaxed to boost supplies during the coronavirus pandemic.

As of next week, the Armed Services Blood Program, including the Landstuhl, Germany-based ASBP-Europe, will accept blood, platelet and plasma donations from “many military, retirees and veterans and family members who have lived in Europe for some time,” said Stacy Sanning, blood donor recruiter and spokeswoman for ASBP-Europe.

“These changes will help ensure we can continue meeting the military’s blood needs throughout the COVID-19 pandemic and in the future,” she said on ASBP-Europe’s Facebook page.

The changes come after the U.S. Food and Drug Administration relaxed restrictions on who can donate blood, to address the “significant shortage in the supply … in the United States” caused by the coronavirus pandemic, the agency said on its website.

The restrictions have been in place for years and are aimed at reducing the risk that blood recipients could contract variant Creutzfeldt-Jakob disease — the human form of mad cow disease— as well as HIV and malaria.

Under the new guidance, and for the first time in decades, people who have lived in most Western European countries for more than five years will be able to give blood, Sanning said.

Those who had spent that long in Europe since 1980 previously were ineligible to give blood as part of efforts to stop the transmission of the mad cow-like disease.

Many nationals of Germany, Italy, Belgium, Spain and the Netherlands with base access also will be able to give blood to the ASBP.

But even under the new guidance, those who lived in the United Kingdom for three months or longer between 1980 and 1996, and in France or Ireland for five years or more between 1980 and 2001, are still ineligible to give blood. The three countries had high levels of mad cow disease during those time periods.

The wait time for donating blood for people who have traveled to countries with malaria — including Afghanistan, Djibouti or Niger, where thousands of U.S. troops are deployed — has been reduced from 12 months to three months. Travelers to Kuwait, Qatar and Morocco do not need to wait at all before donating.

Among other restricted groups, wait times also have been reduced for those who have had tattoos overseas or in U.S. states that do not regulate tattoo facilities, individuals who have had ear or body piercings with single-use equipment, and men who have sex with men, the new guidance said.

“For us, it’s a game changer,” Sanning said of the relaxed restrictions. “Around 85 percent of the people I meet on military installations throughout Europe were previously not eligible because they had lived here more than five years, had been to a malaria-risk country or gotten an overseas tattoo in the past year.”

The FDA changes are based on analyses of recent studies and data and won’t compromise the safety of the blood supply, the agency said. The guidance is expected to continue for the duration of the public health emergency and be reviewed when it ends.

Military blood drives in Europe include one at Wiesbaden beginning Monday and at Stuttgart starting July 21. Blood drives are also regularly held at Landstuhl Regional Medical Center. Donors must make an appointment.

All the blood donated to the ASBP stays within the military and is ready for use during missions, exercises and for patients in medical facilities, the program said on its website.

Information about blood drives in Europe or blood-donor eligibility is available on ASBP-Europe’s Facebook page.