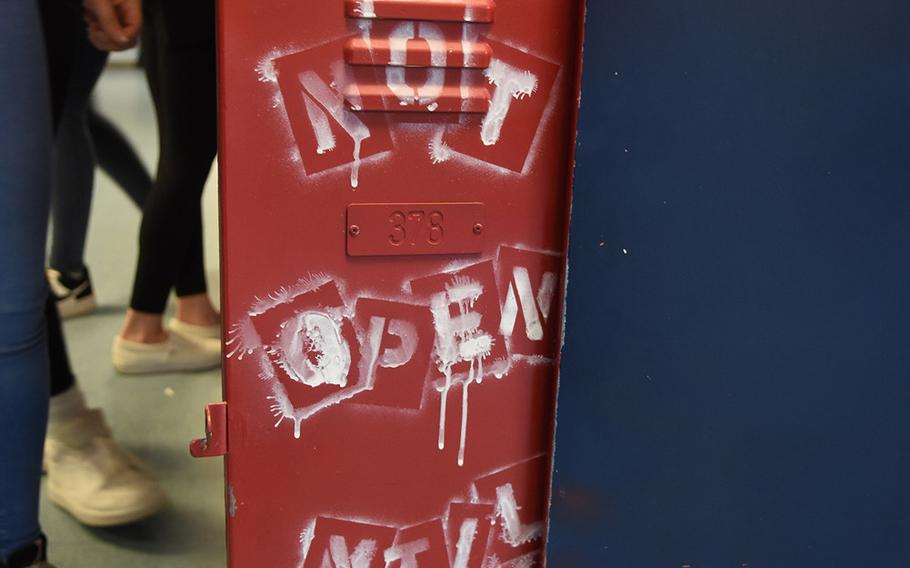 Buy Photo
Instructions painted on a school locker converted into a time capsule by the Ramstein High School Class of 2005. Senior officers from the class of 2021 opened the capsule on Friday, Dec. 11, 2020, at the school on Ramstein Air Base, Germany. (Jennifer H. Svan/Stars and Stripes)

Buy Photo
Instructions painted on a school locker converted into a time capsule by the Ramstein High School Class of 2005. Senior officers from the class of 2021 opened the capsule on Friday, Dec. 11, 2020, at the school on Ramstein Air Base, Germany. (Jennifer H. Svan/Stars and Stripes) 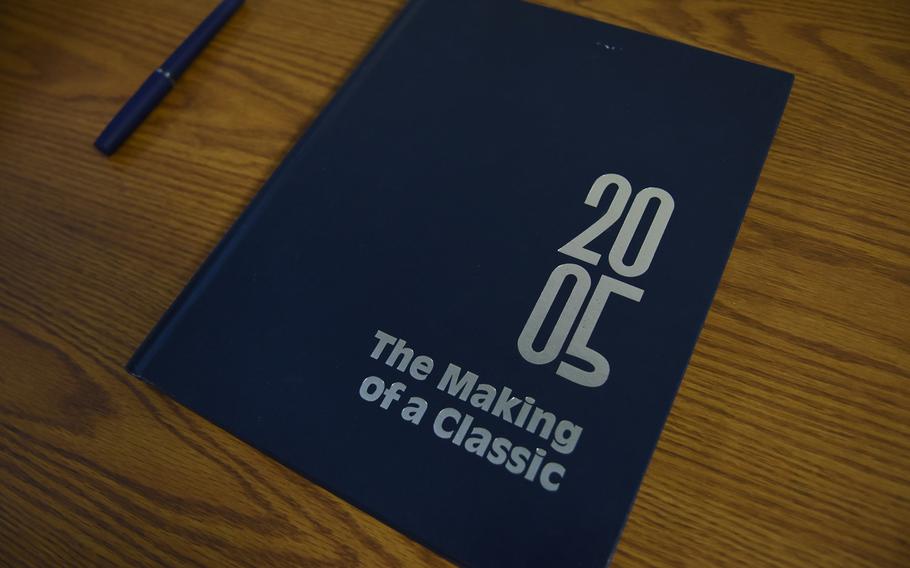 Buy Photo
A yearbook from the class of 2005 sat on a table inside senior hall at Ramstein High School at Ramstein Air Base, Germany. The school’s senior class officers found the same yearbook covered in dust in the time capsule they opened on Friday, Dec. 11, 2020, left by the class of 2005. (Jennifer H. Svan/Stars and Stripes) 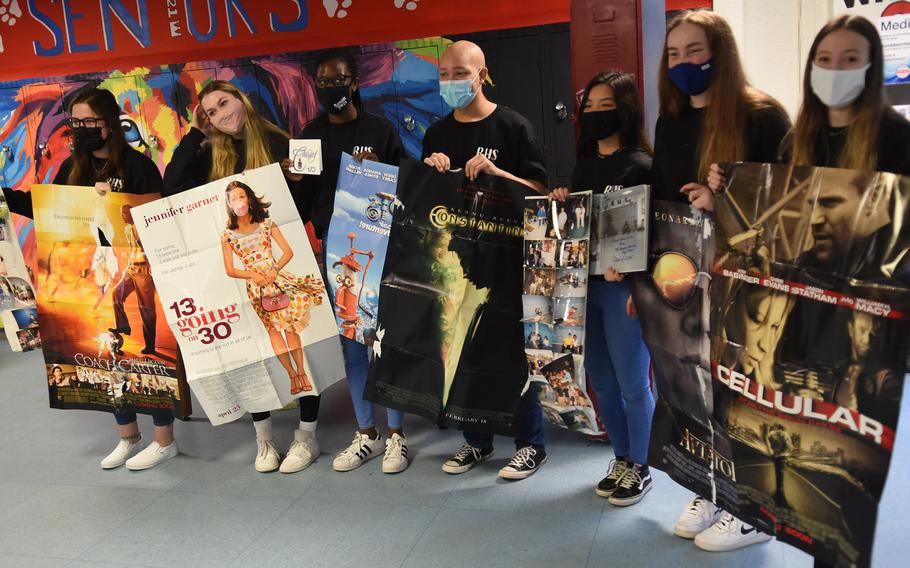 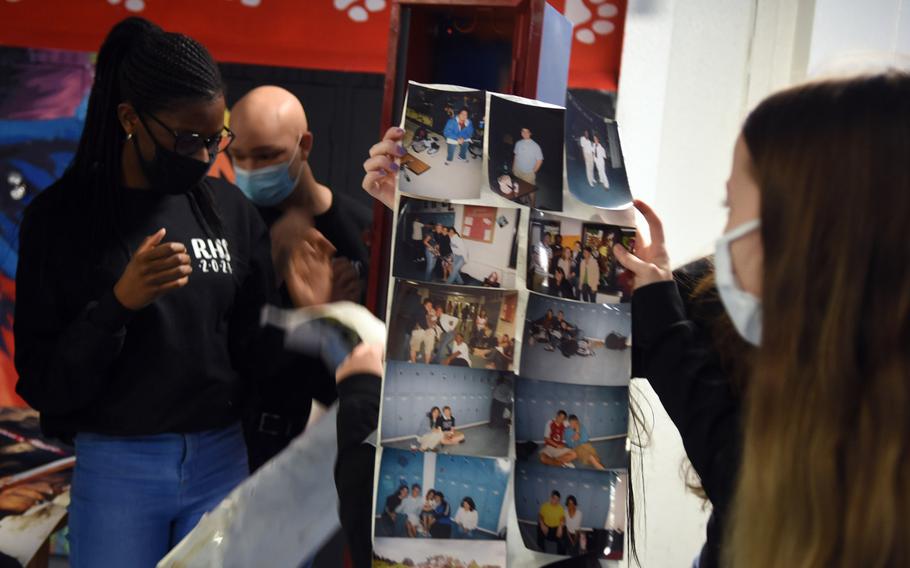 Buy Photo
Ramstein High School seniors look over old photos left in a time capsule by the class of 2005, on Dec. 11, 2020. The students wore baggier, more comfortable-looking clothes, this year’s seniors noticed, and boot-cut jeans and skirts were in, they observed. (Jennifer H. Svan/Stars and Stripes) 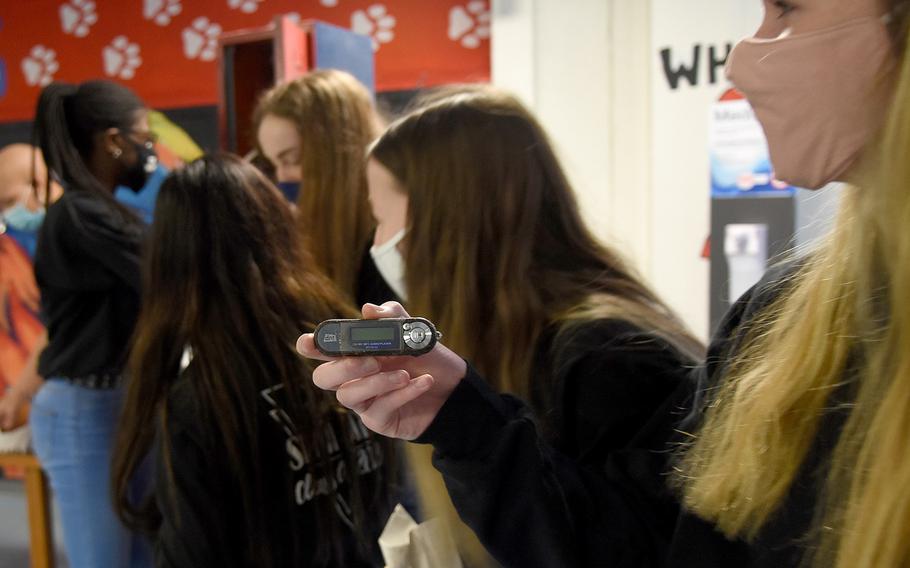 Buy Photo
Ramstein High School Jamisen Casey holds an MP3 player, one of several relics left in a locker converted to a time capsule by the RHS Class of 2005. The school’s senior class officers opened the locker on Friday, Dec. 11, 2020. (Jennifer H. Svan/Stars and Stripes) 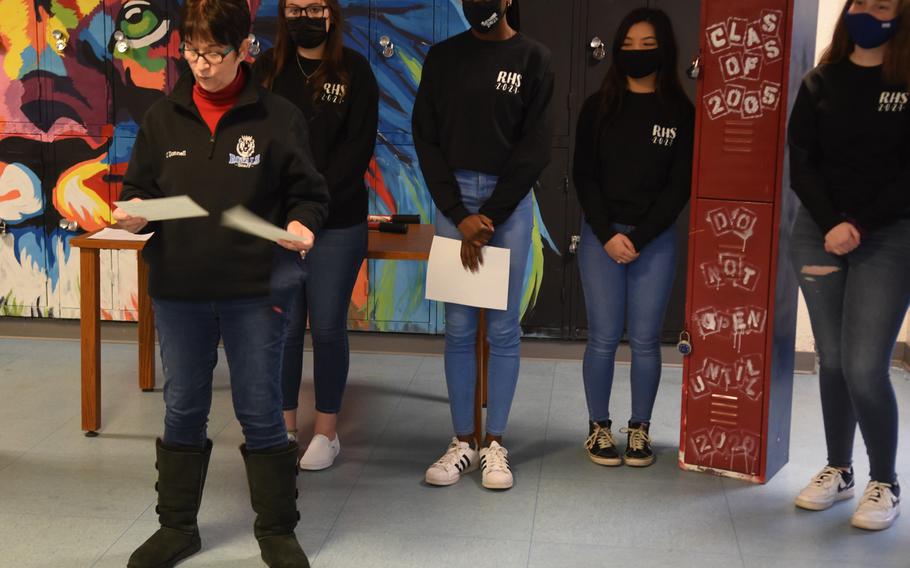 Buy Photo
Ramstein High School principal Sharon O’Donnell gives opening remarks at a ceremony Friday morning, Dec. 11, 2020, at the school to open a time capsule from the class of 2005. O’Donnell said that back in 2005, RHS seniors were much the same as they are now, as young people who cared for each other with dreams and aspirations. (Jennifer H. Svan/Stars and Stripes)

RAMSTEIN AIR BASE, Germany — This year’s Ramstein High School seniors were toddlers when the class of 2005 boxed up a few items from their school years and sealed them up.

Across the doors of the double red and blue school locker, they spray-painted in big white letters instructions for a future generation: “Do Not Open Until 2020.”

But the time capsule’s spring opening had to be postponed when the pandemic shut down school in March.

“We figured we’d at least do it in the year 2020,” said class of 2021 sponsor Nathell Porter, while standing in the school’s senior hall Friday morning for the capsule’s unveiling.

With help from some bolt cutters, the padlocks were broken, the rusty doors pried open, and the current class officers, part of a group limited to under a dozen due to coronavirus restrictions, had a look. The event was recorded so the rest of the school could view it online.

Inside were old movie posters, a 2005 yearbook covered in dust, handwritten notes to classmates – before the age of smartphones – photos of students hanging out at school, and perhaps most mysterious of all, an MP3 player.

“I saw one when I was a little kid, but I haven’t seen one since,” said Alison LeClair, the senior class historian. The MP3 player was found to still work and had music on it, which the students planned to listen to later.

A letter written by Jayme Norris, a former RHS teacher and the class of 2005 sponsor, offered a glimpse into life back then.

George W. Bush was president and Angela Merkel was poised to become the first female chancellor of Germany. Myspace was popular, while YouTube was in its infancy but already holding fascination with young people.

“It was basic, it was slow, the videos were terrible,” said senior Dakota Boyles, reading Norris’ letter, “but it was something they were yearning to engage in, no matter which village with slow internet they lived in.”

And American Forces Network “was a thing for them. They actually watched TV,” with American Idol, Survivor, Jon Stewart and The Colbert Report among the class’s favorite shows, Norris said in her letter.

Times were also tough. The class of 2005 were freshman during the 9/11 terrorist attacks. Some lost family members and friends; student activities became “high-security events,” with military and German police and bomb-sniffing dogs on hand, while other events were canceled outright.

Come graduation, many seats were empty, as parents were deployed to Iraq, Afghanistan or elsewhere in the Middle East, Norris said in her letter.

The current seniors, finishing high school while in the grips of a pandemic, drew parallels to the former classmates.

“They were going through 9/11 and having to be on strict lockdown and how we’re going through that, I think it’s honestly fitting to open it at this time,” said Barakat Ibrahim, the senior class president.

Jamisen Casey, a student council representative, expects their graduation will also have empty seats, due to travel and other restrictions. “It’s really similar in different ways,” she said of the two classes.

The seniors, while noting the seriousness of their shared experiences, also poked fun at their differences.

“You got to love the boot-cut jeans and skirts,” one senior said as they looked over old photos.

Wearing “huge jeans and shirts,” students in 2005 looked “so comfortable and chill,” another student remarked. “Everything is in dress code.”