Stavridis calls on allies to up defense spending 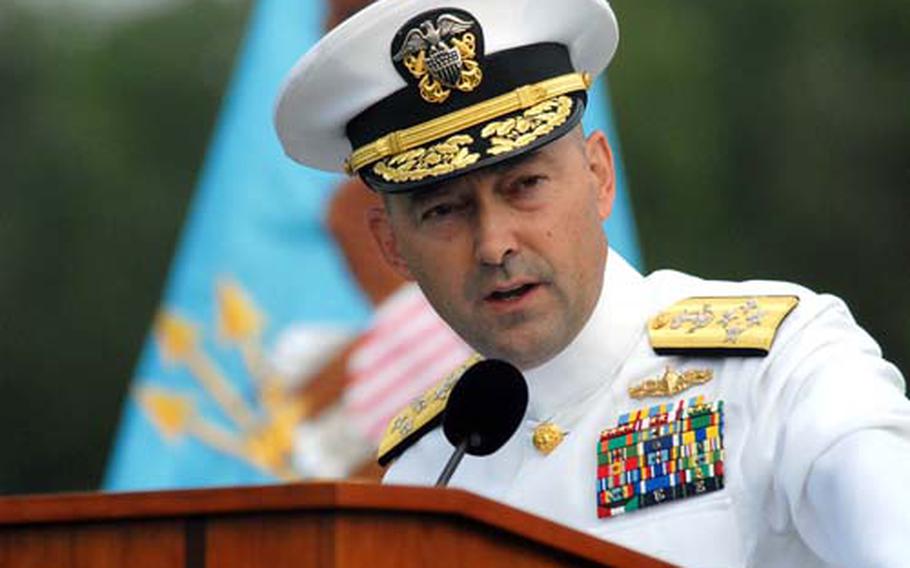 STUTTGART, Germany — European allies must invest more in their own defense to achieve more equitable burden-sharing within NATO, which has become too dependent on the U.S., according to NATO’s top officer.

“[T]he declining European defence budget and the fact that the U.S. accounts for nearly 73 percent of total NATO defence spending is unbalanced and unsustainable over time,” Adm. James Stavridis wrote in a blog posting published on Monday. “American taxpayers will begin to feel that the European Allies and partners are ‘getting a free ride’ as some already say in the U.S.”

Stavridis, who in the coming weeks will step down as NATO’s supreme allied commander and head of U.S European Command, outlined a host of challenges facing the 28-nation alliance in the years ahead in a blog titled: “The Future of European Defence.”

Among the challenges Stavridis said incoming commander U.S. Air Force Gen. Philip Breedlove will have to contend with:

• Cyber threats, where there is the “greatest mismatch between the level of potential threat and our preparation for it,” Stavridis wrote.

• The potential proliferation of weapons of mass destruction from states such as Iran and Syria, along with piracy and illicit trafficking, are other zones of concern for Stavridis.

The sharp austerity measures introduced in many European countries to cope with the financial crisis have triggered cuts in military spending, exacerbating longstanding U.S. concerns over defense expenditures by European allies.

Collectively pooling resources as part of a so-called “smart defense” strategy that calls for targeted spending on key areas of common interest is one way to deal with the consequences of a budgetary crunch, Stavridis said. Still, allies should also meet their own goal of spending 2 percent of GDP on defense, a self-imposed benchmark that most NATO members fail to achieve.

In fact, defense budgets have steadily declined across the alliance. While the U.S. spends more than 3 percent of GDP on defense, NATO’s overall average shrank to 1.6 percent in 2012, down from 1.9 percent in 2009, according to Stavridis.

A number of European governments expect to further slash defense budgets after NATO ends its combat mission in Afghanistan and withdraws most troops next year. Critics of higher defense spending have pointed out that the continent faces no external military threat and that funding could be better used to offset the effects of austerity measures.

Although NATO countries still account for more than 50 percent of the world’s GDP and spend nearly $1 trillion on defense, “dwarfing any possible opponent or combination of opponents,” Stavridis said allies need to do more.

“To meet these many challenges, there is much to be done on this side of the Atlantic, and inevitably NATO will continue to be a useful platform for encouraging a re-emergence of European defence,” Stavridis wrote.