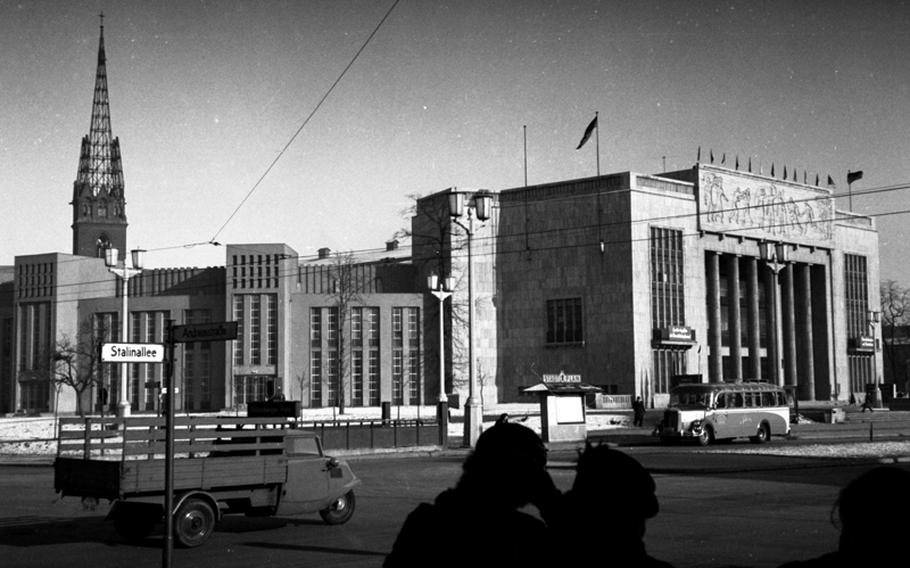 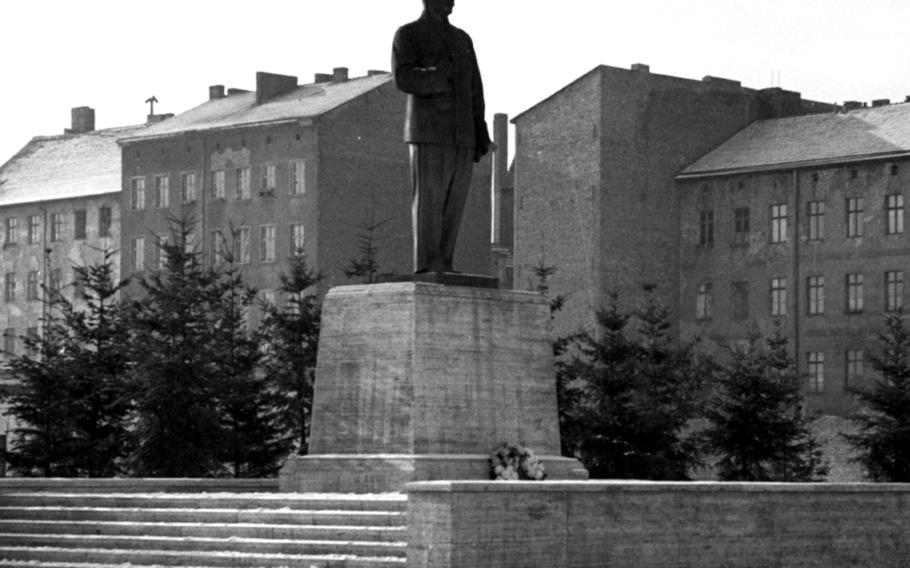 Buy Photo
Stalin's statue, as photographed from the only side permitted by East German police. (Red Grandy/Stars and Stripes)

This broad avenue used to be Frankfurter Allee. But the East German Communist regime, unable to cope with the misery and backwardness in their sector, needed a propaganda gimmick. So they bought made-in-Moscow Stalin Allee.

For a stretch of about a mile on old Frankfurter Allee, the German Red government has put together a glittering oasis in the midst of the rubble pile that is East Berlin.

Stalin Allee is a show street, something to hearten and spur on the wavering Party rank-and-file. It is meant to impress outsiders as an astonishing feat of "Socialist reconstruction."

The Red "miracle mile" is lined with almost solid blocks of eight-story apartment buildings. On the street level are smart shops selling everything from television sets to fish.

Stalin Allee is a boulevard of weird contrasts. Driving there, you pass through streets lined with rubble piles and the shells of bomb-blasted buildings. Suddenly you round a bend in the road. Up ahead, like an apparition, looms a massive skyscraper pile of stone and concrete.

The effect is startling and, of course, that's the way it was meant to be.

Then you drive down a broad boulevard, the lanes separated by a wide, grass-planted traffic island. On either side loom the great blocks of buildings. They have fancy facades with wide terraces and balconies. It is a great show, Stalin Allee.

In the second block is a small park. Close to the sidewalk is a statue of the dead dictator, In real life, Joseph Stalin stood something like 5 feet, 6 inches. But he does much better in stone. towering in heroic proportions over the avenue.

The Reds have thoughtfully provided a wreath of artificial flowers for the base of Stalin's statue. You can pass on a freezing day, but Stalin's flowers look as fresh and cheerful as the benign figure in stone.

Just so no one will get funny ideas, Stalin's statue is guarded day-and-night by two "people's police." Stors and Stripes photographer Francis (Red) Grandy tried to snap Stalin from, the derriere. Grandy wanted to catch the huge sports center across the street in the background.

But the cops said no. It is forbidden to photograph Stalin's statue from the rear.

The boulevard resounds to the blare of music and propaganda messages from loudspeakers hooked to every lamppost: "Boost work norms ... defeat the European army ... Demand German unification ... "

There are some 7,000 persons living in Stalin Allee's 2,608 apartments of two to four rooms. This select population is made up of faithful party hacks and "activists."

Consumer goods are scarce in East Berlin. But most of what there is goes to Stalin Alice. If you can't get it on Stalin Allee, Fast Berlin stores don't have it.

Toward the north end of Stalin Alice is a billboard sign. It is a propaganda sign showing West Berlin under a pall of darkness. But the sun is shining in East Berlin as happy workers take their families on a state-paid vacation.

If there are happy workers in Berlin, however, they are not on Stalin Allee. For the supreme irony of Stalin Allee is that here started the June 17 anti-Red riots which raced like wildfire through the Soviet Zone.