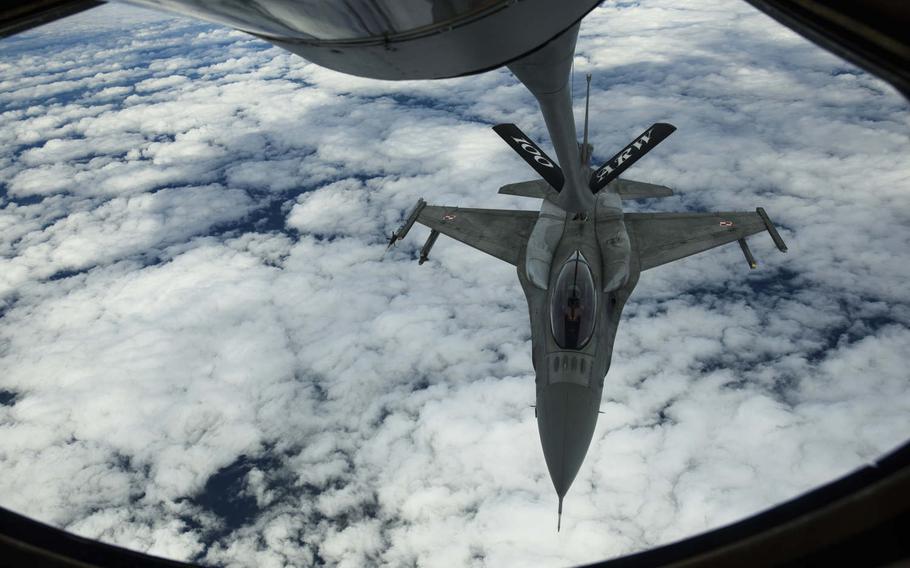 U.S. airmen are quietly closing in on five years of operations in Poland, where members of the 52nd Fighter Wing have staked a small but growing year-round presence aimed at building up allied airpower.

For nearly five years, the Air Force’s 52nd Fighter Wing, based in Spangdahlem, Germany, has maintained a rotating detachment of experts — including fighter and cargo aircraft trainer pilots — in the strategically-important central European nation.

The detachment is based south of the city of Lodz. But its members often crisscross the country for various missions.

The task force became fully operational in November 2012, two years before the U.S. military began a broader effort to beef up its presence in Poland and the Baltics after Russia’s 2014 intervention in Ukraine. At the time, the group consisted of 10 airmen but has since added one Air National Guard member with European Reassurance Initiative, or ERI, funds. During major exercises, that number can as much as triple to 33, with augmentees from U.S. Air Force Europe and other units.

The objective at the outset was to increase cooperation between U.S. and Polish air forces, a mission that has now taken on added significance because of concerns about a more assertive Russia.

The detachment has supported both active-duty and Air National Guard units from Europe and the States. Visiting aircraft have included A-10s, an F-22, F-16s and C-130s.

Padilla said the Air Force’s early presence in Poland and the relationships it has established have helped pave the way for other U.S. Army units that have set up operational outposts in Poland.

“The significance of that (the detachment), is it predates ... Crimea, it predates the EFP and the rotational (armored brigade combat team),” said Padilla, referring to NATO’s Enhanced Forward Presence. “A lot of the relationships we’ve established with Poland, over four or five years, it got the Polish acclimatized to having the U.S. military operate there.”

The EFP involves about 1,200 troops from the U.S. Army’s 2nd Cavalry Regiment, who are positioned in northeastern Poland as a deterrent force.

Russia’s fortified military enclave of Kaliningrad borders Poland and has been a source of concern for NATO. The steadiness of the Air Force’s mission in Poland is added firepower.

The Pentagon has increased its focus on Air Force’s overall role in order to reassure European allies and deter would-be aggressors. The service is slated to get a more than 150 percent boost of $600 million in the Pentagon’s proposed 2018 budget for operations in Europe. Though smaller than what the Army is slated to receive, the Air Force’s share represents the sharpest increase among the services as the military seeks to intensify efforts aimed at countering Russia.

“Any NATO presence out in central, eastern Europe, in addition to the west, not only bolsters regional security in Europe, it also just clearly shows that NATO is alive and well,” Padilla said.

Later this month, Padilla will relinquish command of the detachment, which will be getting its fifth leader, Lt. Col. Paul Dambrauskas, in the coming weeks.

The main mission will continue to center on moving U.S. aircraft through Poland to conduct joint training. Typically there are four annual aircraft rotations at Lask — two fighter, two mobility — for at least two weeks per rotation.

This year, the most recent rotation — which ended June 27 — was a busy one, with eight F-16s from Aviano Air Force Base along with four KC-135s from Spangdahlem and Andrews Air Force Bases. The aircraft took part in NATO exercises over the Baltic Sea and U.S. Army Europe’s Saber Strike exercise.

“The strategic importance of our detachment, being here for a while, we’ve demonstrated a commitment with permanent personnel,” Padilla said.

In Central and eastern Europe, there has long been a perception among some allies that countries such as Poland enjoy a sort of second-tier status among the 29-members in comparison to powerhouses in western Europe.

The detachment’s formation in 2012 was intended to signal U.S. commitment to Poland, Padilla said.

“That was absolutely a gesture to the Polish that we see them as incredibly important NATO partners… and they are an exemplar of that Warsaw Pact-to-NATO transition,” he said.

For airmen who are part of the detachment in Poland, day-to-day life means going without the amenities that come with the larger Air Force bases in Europe. Troops live among the locals and rely on their host nation for the essentials.

“From an airman’s perspective, you have to learn a lot of self-sufficiency,” Padilla said.