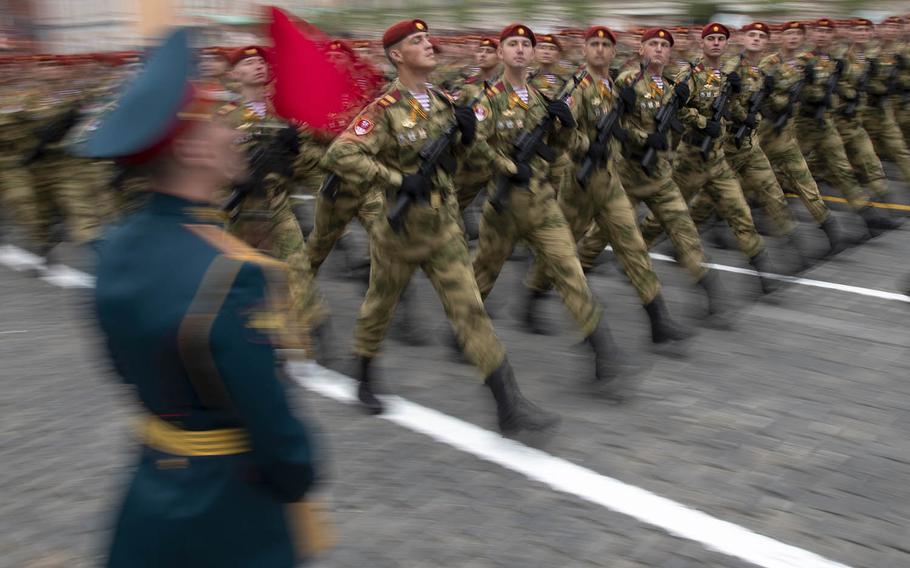 Russian troops march during the Victory Day military parade to celebrate 74 years since the victory in WWII in Red Square in Moscow, Russia, Thursday, May 9, 2019. (Alexander Zemlianichenko/AP)

STUTTGART, Germany — The Russian military is more capable than at any time since the end of the Cold War, the result of an effort to produce a more agile force, a new study found.

“Though significantly smaller than their Soviet predecessors, these forces are better equipped, with professional personnel increasingly prevalent,” the International Institute for Strategic Studies said in its latest assessment of the Russian military.

The report, released Wednesday, described a military that has rebounded from the neglect of the 1990s, when Russia was in disarray after the collapse of the Soviet Union.

Moscow also has benefited from lessons learned during its brief war with Georgia in 2008, which exposed command and control and logistical shortcomings, the IISS report said.

While the Russians easily defeated the much smaller Georgian force, Moscow’s “New Look” reform program was launched to make improvements “in the wake of the armed forces’ poor performance,” the report said.

Those reforms laid the foundations for the current Russian military, which is being used to extend Moscow’s influence beyond its borders.

“Russia’s annexation of Crimea, its involvement in the war in eastern Ukraine and its decisive intervention in the Syrian civil war exemplify growing military confidence and capability,” the report said.

Russia’s ground forces have modernized by fielding the Iskander short-range ballistic-missile system and new self-propelled artillery. Combined with new command-and-control networks and drones, Russia’s forces can “find, fix and strike adversary formations at greater range than before,” the report said.

Russia has also upgraded its Navy, including with more modern submarines, the report said.

While smaller than during the Soviet era, the air force has advanced since the first and second wars in Chechnya and in the short Georgia campaign, which exposed gaps in equipment and training. In 2015, air power improvements were on display in Syria with modernized fighters, the report said.

However, it’s unclear if Russia’s armed forces can maintain their progress, given budget constraints.

“Nonetheless, when combined with Moscow’s more assertive foreign policy, Russia’s armed forces in 2020 constitute a capability that should not be ignored,” the IISS report said.