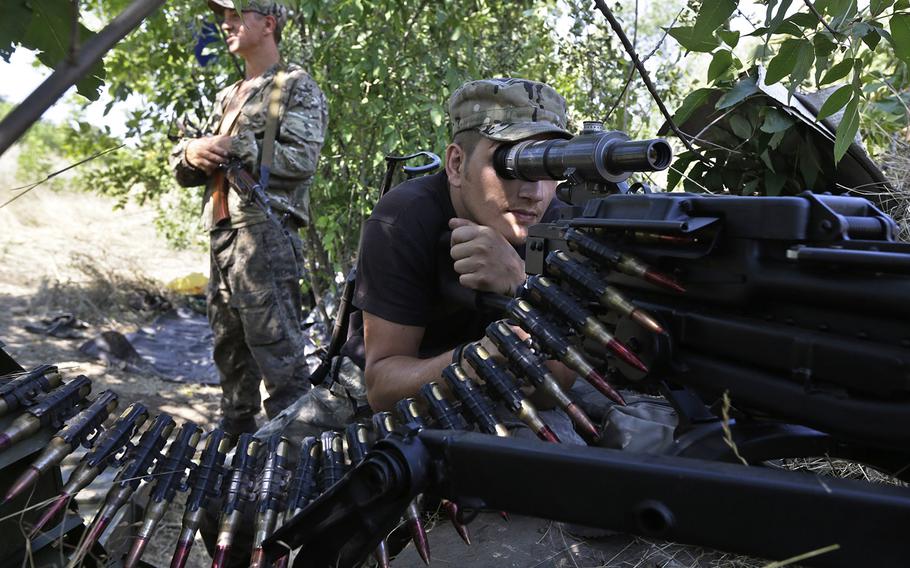 Pro-Russian rebels hold their positions on the frontline near the village of Krasnodon, eastern Ukraine, on Aug. 15, 2014. (Sergei Grits/AP)

Russian military vehicles moved into Ukrainian territory and were destroyed by Ukrainian artillery fire, Ukrainian officials said Friday, as concern mounted that Russia could be preparing to invade the country.

Ukrainian President Petro Poroshenko told British Prime Minister David Cameron in a phone call that “the majority of the machines” had been “eliminated by the Ukrainian artillery” during the Thursday night incident, according to a paraphrased account of the conversation on the presidential website.

Russia denied that any of its military vehicles had crossed into Ukraine or that any had been destroyed, The Associated Press reported, citing a Russian Defense Ministry spokesman.

In Copenhagen, however, NATO Secretary General Anders Fogh Rasmussen confirmed there had been a Russian “incursion” into Ukraine but stopped short of calling it an invasion. He also did not mention any Ukrainian action against the vehicles.

“Last night we saw a Russian incursion, a crossing of the Ukrainian border,” Rasmussen said. “It just confirms the fact that we see a continued flow of weapons and fighters from Russia into the eastern Ukraine.”

Ukraine did not elaborate on the numbers or type of military equipment it said were destroyed. If validated, the Ukrainian claim would reinforce allegations that Russian forces are actively operating in Ukraine.

Andriy Lysenko, a spokesman for the Ukrainian military, told reporters in Kiev that Ukrainian forces engaged the Russian military convoy Thursday and “appropriate actions were undertaken and a part of it no longer exists,” according to media reports.

A senior diplomat at NATO’s headquarters in Brussels said the latest incursion appeared to confirm reports that Russia had been sending aid to the rebels for several months.

“It seems to be more of the same, rather than outright aggression against Ukraine,” said the envoy who could not be identified under standing regulations

The U.S. and its European allies have threatened to impose more and stricter sanctions on Russia if there is evidence that it is overtly supporting Ukrainian separatists.

In London, Cameron expressed “grave concerns at reports of Russian military vehicles crossing the border,” his spokesman said in a statement. The statement added that Russia must not use a humanitarian aid convoy to civilians in eastern Ukraine, where separatists are fighting government forces, “as a pretext for further provocation.”

Officials at U.S. European Command in Stuttgart, Germany, said they were still trying to determine what was happening along the border.

We’ve seen the same reports by the British journalists and now statements by Ukrainian officials, but are unable to confirm the events as laid out,” EUCOM spokesman Capt. Greg Hicks said.

Russia’s aid convoy of some 200 trucks, moved toward a border crossing under separatist control, AP reported, after initially agreeing to let Ukrainian officials inspect the convoy and to allow the Red Cross to distribute the aid. The AP reported that some Russian military vehicles were seen near the aid convoy Friday.

The AP quoted a Red Cross official as saying the tentative plan was for the trucks to enter Ukraine without a military escort.

The Pentagon said Defense Secretary Chuck Hagel spoke Friday by phone with Russian Defense Minister Sergey Shoygu to discuss the ongoing situation in Ukraine, specifically about the Russian humanitarian convoy. A Pentagon statement said Shoygu "guaranteed" that there were no Russian military personnel involved in the humanitarian convoy, nor would the convoy to be used as a pretext to further intervention by Moscow.