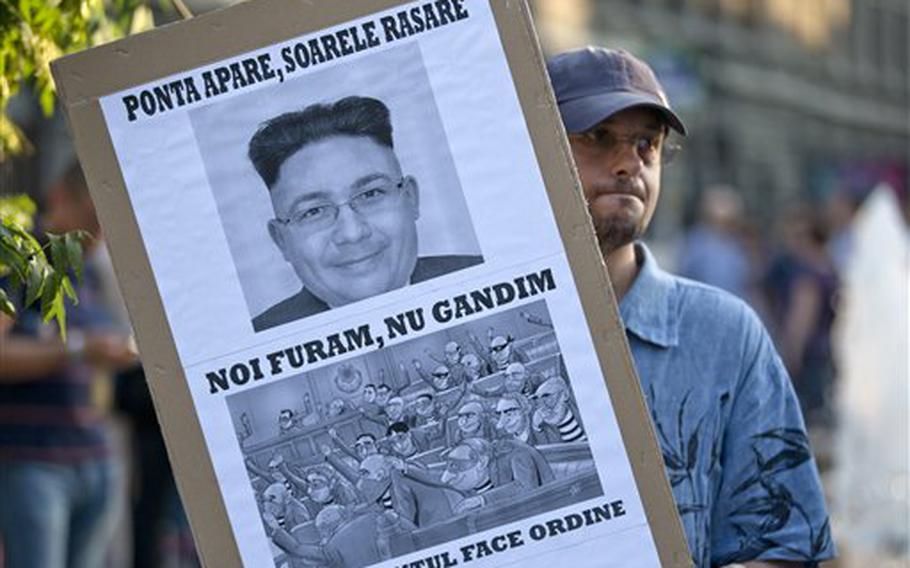 A man holds a banner depicting Romania's Premier Victor Ponta as North Korean leader Kim Jong-un, during a protest demanding his resignation in Bucharest, Romania, Thursday, June 11, 2015. Romania's president urged Prime Minister Victor Ponta to resign after the country's anti-corruption prosecutor's office launched a probe into corruption allegations including tax evasion and money laundering but Ponta refused, saying that only Parliament could dismiss him. Poster reads, ' Ponta shows up - the sun rises.' At bottom, 'We steal - we don't think', above a picture depicting parliament members as villains. ( (Vadim Ghirda/AP)

BUCHAREST, Romania — Romania's prime minister, who faces accusations of corruption including money laundering and conflict of interest, easily survived a vote of no-confidence on Friday.

Lawmakers voted 194-13 to dismiss Premier Victor Ponta in a secret ballot, falling short of the 278 needed. Most lawmakers from the ruling Social Democracy Party which Ponta heads did not vote, though Ponta and two others did.

"Let's get on with the job, the country needs to be governed," Ponta said in brief comments after the vote.

On June 5, anti-corruption prosecutors said Ponta was suspected of being an accomplice to tax evasion from 2007 to 2008 while serving in Parliament, forgery, a conflict of interest and money laundering.

Ponta refused to resign and on Tuesday Parliament voted to keep his immunity from prosecution. He says the accusations are politically motivated.

Opposition leader Vasile Blaga called Ponta "a desperate politician who is clinging to his seat."