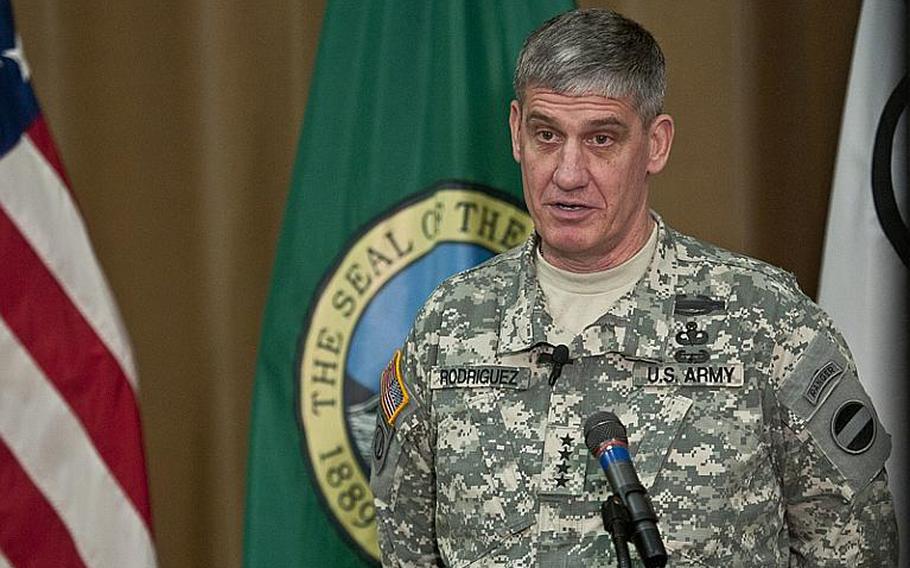 Gen. David Rodriguez, who has been confirmed as commander as U.S. Africa Command. ()

STUTTGART, Germany — Gen. David Rodriguez will soon take up residence at his new headquarters in Stuttgart following his official confirmation this week as the new commander of U.S. Africa Command.

Rodriguez, who was confirmed Monday by the Senate, will replace Gen. Carter F. Ham.

A date for the change of command in Stuttgart has not yet been announced, but with Ham slated to retire this year, Rodriguez should be in his new post this spring.

The Senate also confirmed Army Gen. Lloyd J. Austin III, currently the vice chief of staff of the Army, to serve as the next leader of Central Command. He will succeed Marine Corps Gen. James N. Mattis, who also is retiring.

AFRICOM, the youngest of the military’s geographic combatant commands, has seen its profile rise during Ham’s tenure. AFRICOM’s first major military operation came in 2011, just weeks after Ham assumed command, when it led the initial effort to impose a no-fly zone over Libya. The ensuing seven-month bombing campaign led to the overthrow of Libyan strongman Moammar Gadhafi.

Rodriguez, who currently heads U.S. Army Forces Command at Fort Bragg, N.C, will face a host of security challenges in his new position. Chief among them will be the presence of al-Qaida-affiliated militants in Mali and other Islamic extremist groups in Nigeria and Somalia.

In other moves, Lt. Gen. John F. Campbell was confirmed as Austin’s replacement as vice chief of staff of the Army, earning a fourth star in the process. Lt. Gen. Vincent K. Brooks was confirmed as the next commanding general of U.S. Army Pacific at Fort Shafter, Hawaii.