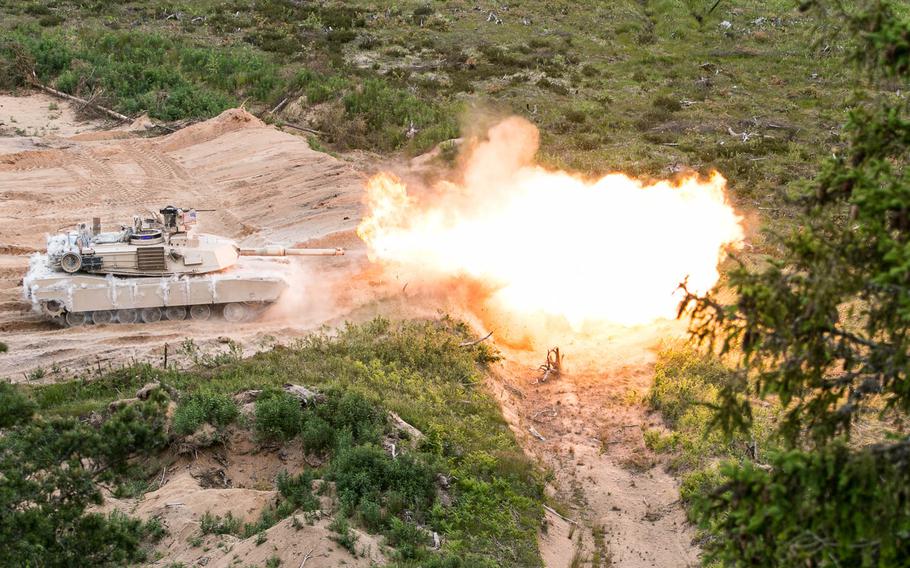 An Abrams tank from the U.S. Army's 3rd Infantry Division fires its 120 mm main gun during a live-fire exercise in June 2015 at the Central Training Area near Tapa, Estonia. A 2016 report by Rand Corp. says NATO does not presently have the capability to defend the Baltics if Russia launched an offensive on those allied states. (Joshua S. Brandenburg/U.S. Army )

STUTTGART, Germany — A Russian offensive on NATO territory in the Baltics would overwhelm underarmed alliance forces in a matter of hours, leaving NATO with a harsh dilemma: Launch a long, bloody counteroffensive or concede defeat.

That is the conclusion of a new report by Rand Corp., which conducted a series of elaborate war games from summer 2014 to spring 2015 with the assistance of numerous American military commands and experts.

“As presently postured, NATO cannot successfully defend the territory of its most exposed members,” the Rand Corp. study says.

The findings are likely to come as no surprise to the military’s top officers in Europe, who have been warning that sophisticated Russian anti-aircraft systems could deny allies quick military access to the Baltics. Russia has superior numbers of air and ground forces across the border from the vulnerable Baltic states, which were once part of the Soviet Union. However, Russia has repeatedly stressed that it has no territorial designs on the Baltics.

Policymakers must determine whether the risks of potential Russian aggression are strong enough to demand the kind of reinforcements that could thwart a Russian assault. The costs of placing such a force in the region would be substantial but manageable for a NATO alliance with a collective gross domestic product of more than $35 trillion, Rand says.

The report was issued just days before the release next week of the Pentagon’s 2017 budget, which includes plans to add a brigade’s worth of pre-positioned tanks and other heavy equipment in Europe, where the Pentagon now rotates one heavy brigade. The U.S. maintains only two infantry brigades permanently in Europe and no heavy units.

There are about 65,000 troops in total forward stationed. A plan to quadruple investment in the European Reassurance Initiative to $3.4 billion will add several thousand more rotational troops in a plan to increase operations along NATO’s eastern flank, but falls far short of Rand’s recommendations.

The force could not mount a sustained defense of the region, but it would buy allies time to assemble a larger force. The presence of multiple brigades and air power also would “fundamentally change the strategic picture as seen from Moscow,” according to Rand.

“While this deterrent posture would not be inexpensive in absolute terms, it is not unaffordable, especially in comparison with the potential costs of failing to defend NATO’s most exposed and vulnerable allies,” Rand says.

Still, many NATO allies would likely balk at such a plan. Germany, for example, has long opposed any placement of permanent NATO forces in the Baltics or eastern Europe, which Berlin contends would be an unnecessary provocation to Russia. Moscow contends such a move would violate a 1997 NATO agreement that it says limits the types of forces that can be placed near its border.

Also, there is little evidence that Russia intends to launch any kind of formal attack on a NATO state, which could trigger a collective alliance military response under NATO’s Article 5 provision that an attack on one member demands a response from all.

“I think it’s highly unlikely that [Russian President Vladimir] Putin would contemplate an invasion of the Baltics, be it a traditional conventional invasion or a more covert hybrid invasion of the sort executed in Ukraine,” said Robert Person, a Russia expert at the U.S. Military Academy at West Point. “It is hard to see what Russia would gain by doing so, as I do not believe that Putin is trying to reassemble the original territory of the Soviet Union.”

NATO’s collective security pact on its own should give Moscow pause before launching an attack on the U.S.-led NATO alliance, whose $1 trillion in defense spending dwarfs Russia’s.

“My sense is that Putin understands the strategic implications of such an adventure, an understanding that would make him think long and hard about launching a war that he cannot afford and cannot win in the long run,” Person said. “In the short run, however, it is absolutely worth reminding him of the credibility of NATO’s deterrent threat.”

If NATO sought to establish a force capable of countering a Russian offensive, Moscow could elect to further build up its own regional forces, setting off a race for the upper hand.

At NATO headquarters, officials said they have taken note of the Rand report and pointed to recent alliance actions aimed at improving overall readiness, such as doubling the number of NATO’s crisis response forces to 40,000 troops.

“NATO is well-prepared to defend all allies. Our commitment to Article 5 is rock-solid,” a NATO official said, speaking on condition of anonymity.

Strengthening NATO’s position in the east will be on the agenda of a defense ministers’ meeting in Brussels next week.

“We are now assessing the right balance between a forward presence and our ability to reinforce in a crisis,” the NATO official said.

During Rand’s war game scenario, allies had one week to assemble forces to counter an onslaught on the Baltics. The Russian attackers, comprised of troops from the Western Military District and the Russian enclave of Kaliningrad, deploy 27 maneuver battalions in a short-warning attack to occupy Estonia and Latvia. In the scenario, allies were able to mobilize light infantry units in time, but the force proved inadequate, presenting NATO with “a rapid fait accompli.”

“The outcome was, bluntly, a disaster for NATO,” the Rand report says. “Across multiple plays of the game, Russian forces eliminated or bypassed all resistance and were at the gates of or actually entering Riga, Tallinn, or both, between 36 and 60 hours after the start of hostilities.”

If NATO sought to establish a deterrent force in the Baltics, air cover would be necessary to protect the maneuver of ground forces, the war games found.

“Against an adversary, such as Russia, that poses multidimensional threats, air power must be employed from the outset of hostilities to enable land operations, and land power must be leveraged to enable air power.”

Also, NATO would require a better command structure to plan and execute operations in a fast-unfolding crisis.

“This is not something that can safely be left to a pickup team to ‘do on the day’; it requires careful preparation,” Rand says.