RAF Mildenhall to close amid other Europe consolidations 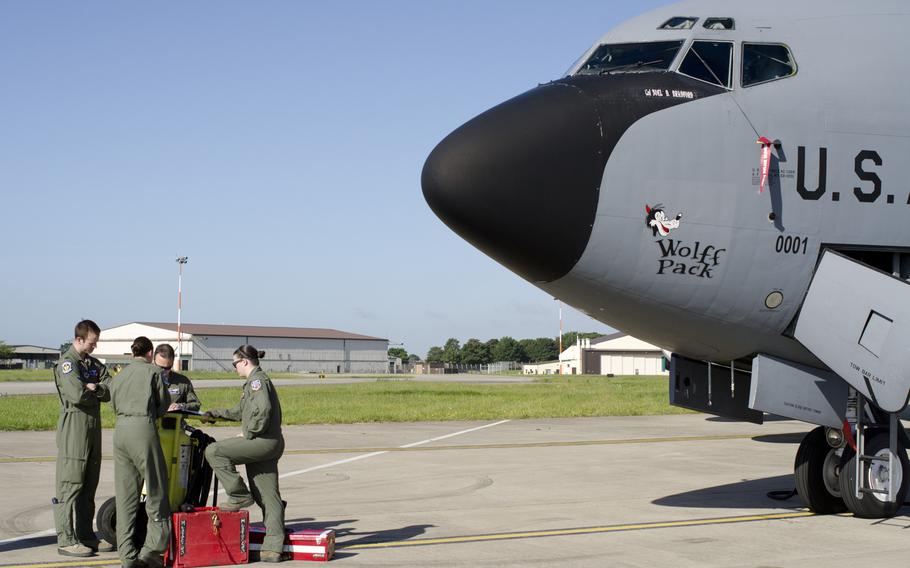 An aircrew stands beside a KC-135 Stratotanker at RAF Mildenhall, England, on June 11, 2014. On Jan 8, 2015, the Defense Department announced that it would return the base to England and move the Air Force's air refueling wing to Germany. (Adam L. Mathis/Stars and Stripes)

An aircrew stands beside a KC-135 Stratotanker at RAF Mildenhall, England, on June 11, 2014. On Jan 8, 2015, the Defense Department announced that it would return the base to England and move the Air Force's air refueling wing to Germany. (Adam L. Mathis/Stars and Stripes) 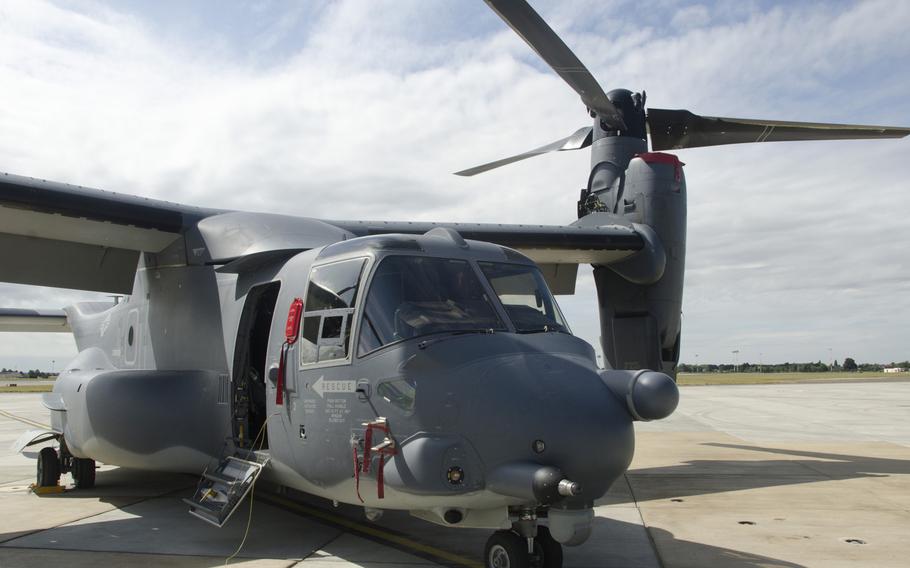 A 352nd Special Operations Group CV-22 Opsrey sits on the runway at RAF Mildenhall, England, on July 26, 2013. The Department of Defense announced Thursday that the SOG would be moving to Germany as part of a plan to return RAF Mildenhall to England. (Adam L. Mathis/Stars and Stripes) 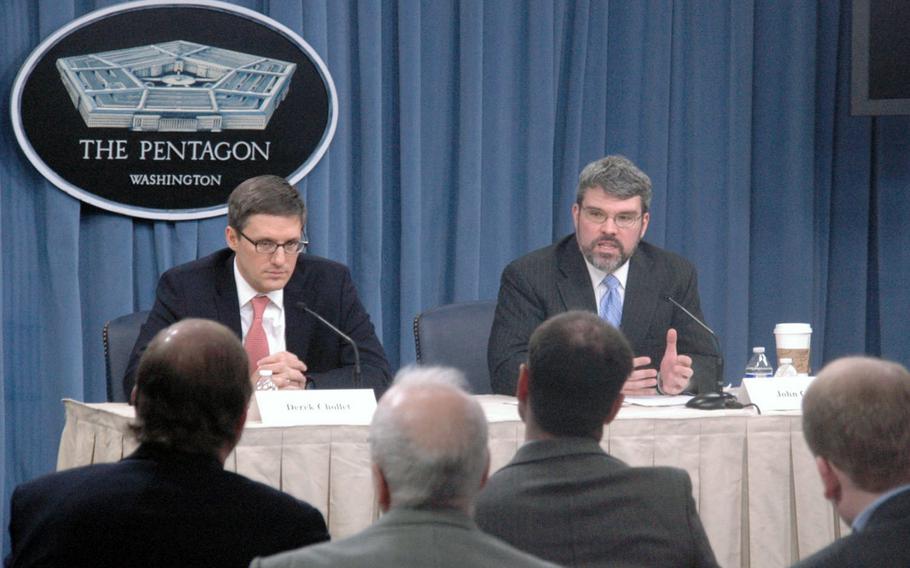 Assistant Secretary of Defense for International Security Affairs Derek Chollet, left, and John Conger, performing the duties of assistant secretary of defense for energy, installations and environment, explained the details of the European Infrastructure Consolidation plan at the Pentagon on Jan. 8, 2015. (Chris Carroll/Stars and Stripes )

STUTTGART, Germany — A major U.S. Air Force base in the United Kingdom and 14 other installations scattered across Europe will close as part of a sweeping reorganization of U.S. forces on the Continent, the Pentagon announced Thursday.

Operations at RAF Mildenhall — home to Air Force special operations forces, air refueling tankers and 3,200 military personnel — will end, and missions carried out there will be moved to other locations, including Germany. RAF Alconbury and Molesworth, two other facilities in the U.K., also will close as part of a consolidation effort. Most of the missions there will be moved to RAF Croughton.

Meanwhile, the Pentagon plans to station two squadrons of F-35s at RAF Lakenheath by 2020, which ensures the continuous presence of U.S. air power in the country.

“In the end, this transformation of our infrastructure will help maximize our military capabilities in Europe and help strengthen our important European partnerships, so that we can best support our NATO allies and partners in the region,” Defense Secretary Chuck Hagel said in a statement.

The changes will mean a slight reduction in overall force levels, but troop numbers in Europe are expected to hold near the current level of 67,000. Germany and Italy will gain troops, though it is expected to take several years for all of the Pentagon’s basing decisions to be implemented.

The Pentagon expects to save about $500 million annually from the consolidations. The cost of implementing the closures and consolidations will be roughly $1.4 billion, according to DOD.

In part, the European Infrastructure Consolidation — under review for more than two years — grew out of the Pentagon’s desire to overcome lawmakers’ resistance to additional base closures in the U.S. through the Base Closure and Realignment Commission, or BRAC, process by showing a willingness to close facilities in Europe.

“I have been very vocal about force structure in Europe, but let’s remember the EIC is about infrastructure,” Breedlove told Stars and Stripes while traveling in Afghanistan. He has been a strong opponent of further reducing forces in Europe given Russia’s aggressive posture toward Ukraine and hostile stance toward NATO.

“Remember how big we were [in Europe]...we still have infrastructure we can downsize that saves us money we can spend on readiness and capabilities,” Breedlove said.

The pending closure of Mildenhall is the first major Air Force base elimination in Europe in years.

Rumors forewarned some airmen at Mildenhall that changes were coming. Senior Airman Jason Greenley with the 352nd Special Operations Group said he was sad the base was closing and has enjoyed working there. However, he said, his job in maintenance management analysis means he could be reassigned to England in the future. “I can always go to Lakenheath.”

In Germany, both Ramstein and Spangdahlem air bases will gain personnel and aircraft.

Ramstein, already host to one of the busiest airfields in the U.S. Air Force, will take on the air-to-air refueling mission, with plans to move 15 KC-135 Stratotankers and about 700 personnel from the 100th Air Refueling Wing at Mildenhall to the Kaiserslautern-area base, said Maj. Mike Andrews, a USAFE-AFAFRICA spokesman.

The special operations mission will go to Spangdahlem, where about 10 CV-22 Ospreys and 10 MC-130J aircraft and associated personnel from the 352nd Special Operations Group at Mildenhall will relocate, USAFE officials said.

“The EIC identified sufficient excess capacity at both Ramstein and Spangdahlem to absorb the missions currently at RAF Mildenhall,” Andrews said.

Relocating the 606th Air Control Squadron and about 300 personnel from Spangdahlem to Aviano Air Base in Italy will free up some space at Spangdahlem for the special operations move, saving the Air Force about $50 million in military construction funding, USAFE officials said. A similar air control squadron was inactivated at Aviano in 2013, creating space for the Spangdahlem unit.

Some relocation efforts are expected to start within a year, though an exact timeline for EIC-directed moves is still being considered, according to a USAFE-AFAFRICA news release. Major moves won’t take place until facilities are ready to receive the mission relocations, with divestments expected to be complete within seven years.

“We understand these changes will have substantial impacts on the local areas, but we are dedicated to working closely with our community neighbors, defense partners, personnel and families to ease the impact of these transitions as much as possible,” Gen. Frank Gorenc, USAFE-AFAFRICA commander, said in a statement.

As Lakenheath prepares to host F-35s beginning in 2020, the current plan is to keep the F-15s at the base through the summer of 2016, Andrews said. Plans for the interim are still being considered.

Officials at the Pentagon added that no decision has been made yet on whether to base F-35s in Aviano in the future, but such a move is being looked at.

In Italy, the Pentagon said it would add about 200 military positions once the 606th Air Control Squadron relocates from Spangdahlem.

In the case of the Army, most of the announced consolidations target small outposts and support infrastructure rather than key operational hubs.

For the past decade, the U.S. Army in Europe has been steadily drawing down and consolidating its network of garrisons around Europe. In 2012, USAREUR announced it would inactivate two brigades and close garrisons in Bamberg and Schweinfurt in Germany.

In Portugal, efforts to reduce the mission at Lajes Field will continue with the reduction of 500 military and civilian personnel assigned there and the returning of some infrastructure to Portuguese authorities, according to the Pentagon.

The consolidations come as the U.S. and its allies in Europe attempt to bolster their presence in eastern Europe as part of an effort to reassure allies and deter Russian aggression in the region.

“I would argue …the EIC is a reaffirmation for having a robust force in Europe,” said Assistant Secretary of Defense for International Security Affairs Derek Chollet. “We need to ensure to ourselves, Congress, the American people that we are there as efficiently as we can be.”

The already approved $1 billion European Reassurance Initiative aims to boost the U.S.’ rotational presence in Europe for a range of training and exercises with NATO partners, as well as support infrastructure improvement projects that will help efforts to reassure allies in eastern Europe.

While moves such as the closure of Mildenhall will alter how the military executes some of its missions, other measures will have an effect on more mundane day-to-day matters.

For example, commissaries at three posts in the Stuttgart military community — EUCOM’s Patch Barracks, Africa Command’s Kelly Barracks and the housing community at Robinson Barracks — all will eventually close. In their place will be an upgraded commissary on Panzer Kaserne, home to the garrison headquarters. Commissaries at Illesheim and Sembach also will close.

Meanwhile, officials with Department of Defense Dependents Schools-Europe said Thursday they are still assessing the effects of the consolidation plan on schools.

The two schools at RAF Alconbury will close when the base shutters, said Bob Purtiman, a DODDS-Europe spokesman.

A new elementary and middle-high school is planned for RAF Croughton, which is slated to receive an additional 1,200 personnel from the closing of Alconbury and Molesworth.

List of planned changes in Europe:United Kingdom Divest RAF Mildenhall: • Returns the installation and four supported sites to the United Kingdom. • DOD intends to relocate the operational units at RAF Mildenhall within Europe — the assigned KC-135s and the 352nd Special Operations Group to Germany and the assigned RC-135s within the U.K. This paves the way for the stationing of two squadrons of F-35s at RAF Lakenheath, starting in 2020. • Divest RAF Alconbury/RAF Molesworth: Consolidation of missions allows the permanent return of RAF Alconbury, RAF Molesworth and supporting sites to the United Kingdom. The majority of U.S. personnel, and many of the U.S.-funded host nation positions assigned to these bases will be transferred to RAF Croughton.