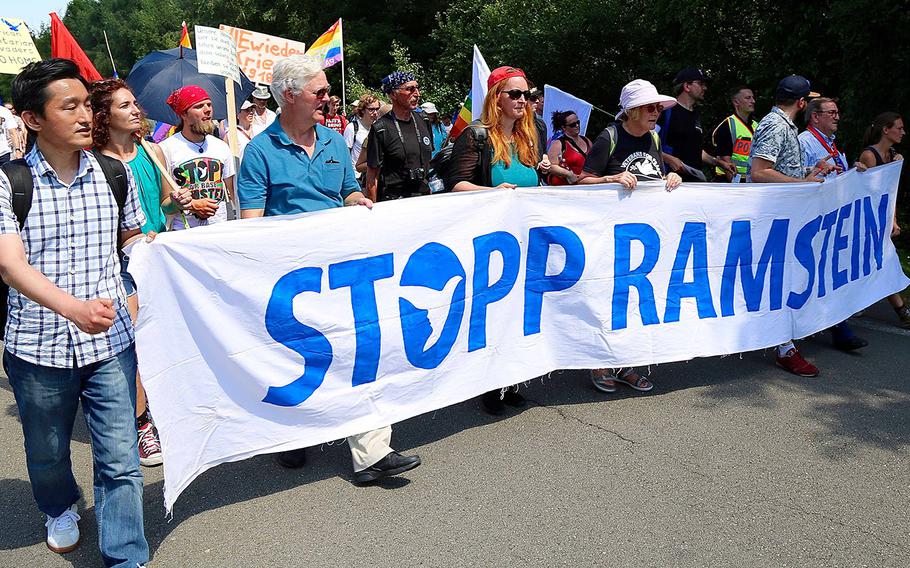 Protesters march outside Ramstein Air Base, demanding its closure, on June 30, 2018. The protesters claim the base is being used to relay signals to drones being used to fight Islamic militants. (Will Morris/Stars and Stripes)

Protesters march outside Ramstein Air Base, demanding its closure, on June 30, 2018. The protesters claim the base is being used to relay signals to drones being used to fight Islamic militants. (Will Morris/Stars and Stripes) 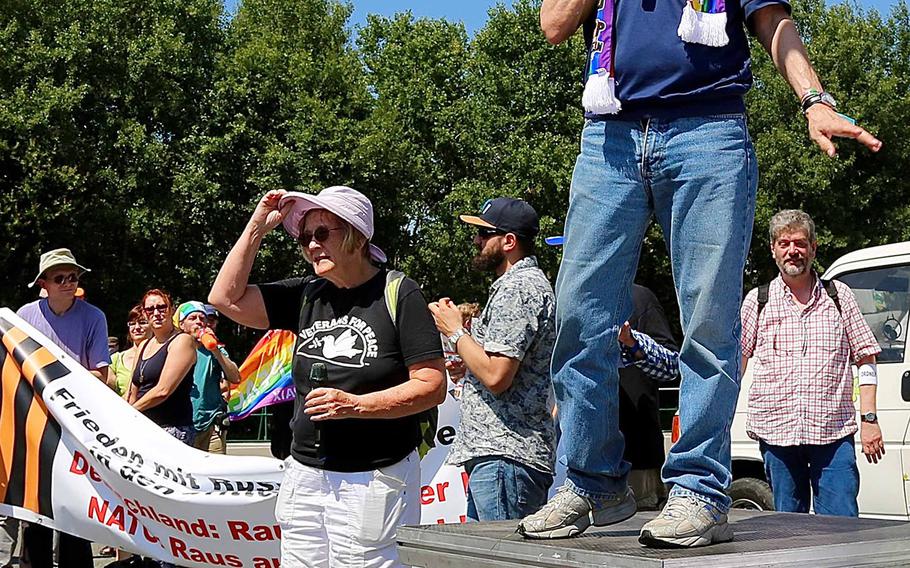 Reiner Braun, an organizer with Stopp Air Base Ramstein, speaks to a group of protesters outside Ramstein Air Base, June 30, 2018. (Will Morris) 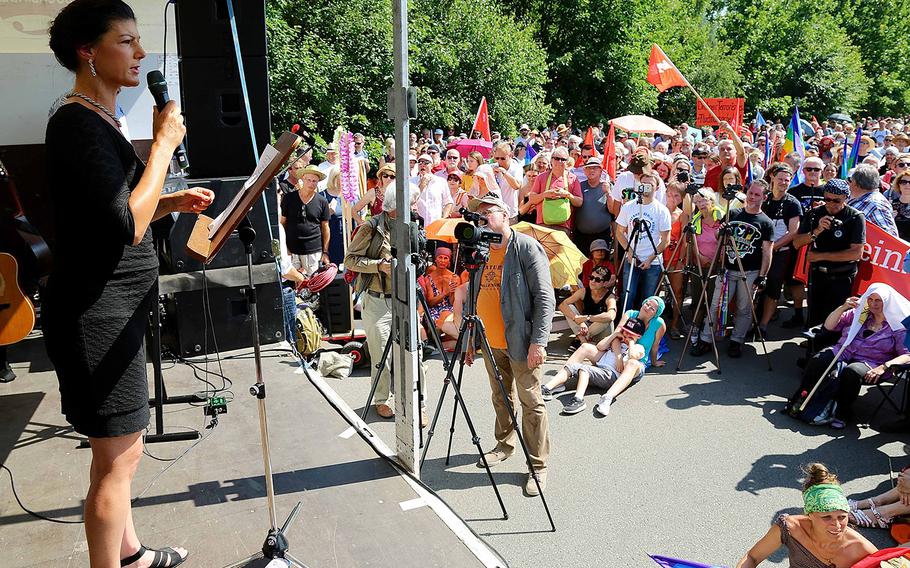 Sahra Wagenknecht, parliamentarian chair person of Germany's Left Party, speaks to protesters about removing U.S. military bases from the country at a rally on June 30, 2018. (Will Morris/Stars and Stripes)

RAMSTEIN AIR BASE, Germany — Protesters marched outside Ramstein Air Base’s west gate on Saturday, demanding the base be closed and seizing upon a media report that the Pentagon is reviewing the costs of keeping troops in Germany.

About 1,500 protesters participated in the march, held annually by the Berlin-based “Stopp Air Base Ramstein” group, according to police.

Reiner Braun, one of the organizers, said that about 2,500 people showed up instead of the 5,000 they expected.

Traffic was backed up outside Gate 5 during the demonstration, and the base security detachment was augmented with reinforcements throughout the event.

Police spokesman Michael Hummel said that groups of activists blocked traffic near the end of the protest.

“Twelve or 13 activists did not stop blocking the street even after they were told several times,” Hummel said. “The prosecutor’s office will now investigate them.”

Protest organizers had promised acts of civil disobedience by “specially trained” activists, but never elaborated on what those acts would be, other than blocking access roads to the base.

Organizers said they were encouraged by a Washington Post report on Friday, which said Trump was taken aback by the size of the U.S. presence in Germany, according to unnamed officials. Trump has also assailed Germany for not doing more to contribute 2 percent of its gross domestic product to NATO, a benchmark agreed upon by its member nations.

However, Defense Secretary Jim Mattis applauded Germany on June 20 for its plans to hike defense spending 80 percent by 2024, which would bring its total to about 1.5 percent of its GDP.

Lucas Wirl, who helped organize the protest, said it could be “a step in the right direction” if Trump pulls U.S. troops out.

“But if the withdrawal of the troops from Germany means they will move to Poland, there is still a problem. Then we have the U.S. troops right next to the Russian border,” Wirl said, adding that the “politics of confrontation” needed to stop; instead, “we need demilitarization of Europe.”

Base officials on Friday warned of traffic delays and asked personnel to avoid the protest for safety reasons.

“We respect our rich history with our German partners and we fight for the right to safely voice opinions through the expression of freedom of speech and assembly,” the base’s Facebook page stated.