Prospect of strikes looms as US Army, German union at odds over new contract 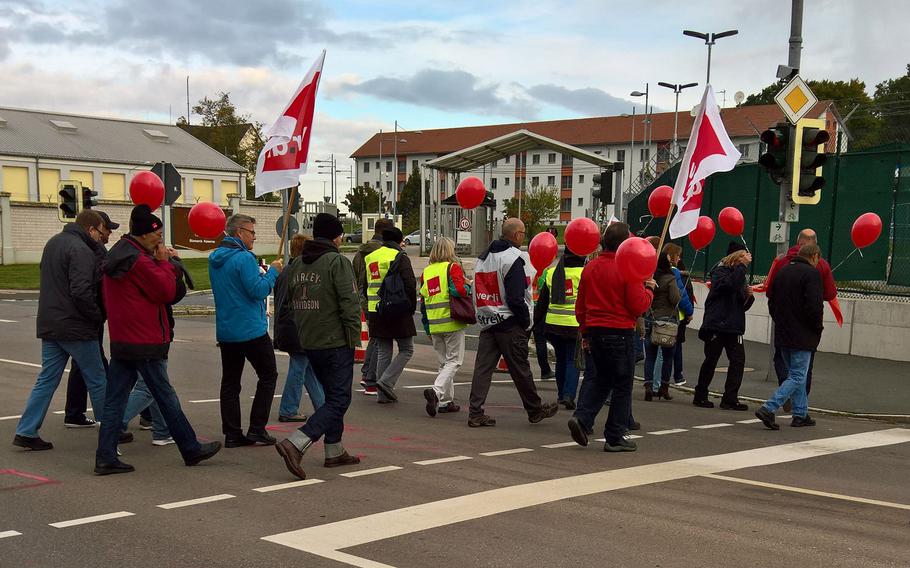 More than 70 civilian employees of the U.S. Army in Katterbach, Germany, went on strike and protested for higher wages in September 2017. Talks between the Army and the union representing German base workers have broken down, again raising the possibility of strikes. (Petra Fichtner)

STUTTGART, Germany — Negotiations between the U.S. Army and the union representing Germans employed on bases in Europe have broken down without an agreement on a new contract, raising the prospect of local workers going on strike.

“At this point, we could see strikes,” said Suzanne Torres, U.S. Army Europe’s assistant deputy chief of staff for civilian personnel. “It’s within their right to do so.”

The stalemate comes at a time of uncertainty for the Army, which is operating under a continuing resolution and could face a financial crisis if Congress is unable to agree on a budget in the coming weeks.

If a deal isn’t reached soon with the local workers, the Army may be forced to scale back its current offer, USAREUR said. Budget uncertainty could affect future pay negotiations with German workers, it said.

“We are upset,” said Paul-Christian Koch, a representative with the Ver.di union. He said that the Army declined a fourth round of negations after the previous three failed to yield a deal.

The union could call its members out on strike to “cause pain to the employers,” Koch said. The work stoppages would focus on areas that are important to the Army, such as logistics departments that organize truck convoys.

The Army employs about 9,200 local workers at its European bases, most of them at garrisons in Germany. Locals hold a wide range of jobs on Army posts, including in administrative positions and as maintenance workers, electricians and engineers.

When the first round of contract talks began in Frankfurt in late September, the union asked for a 6% pay increase and a minimum wage of 2,000 euros per month for all local employees. That would have amounted to a 20% increase for some of the lower grade workers, said USAREUR, which rejected the union’s proposal during the second round of talks in October.

A counteroffer made by the U.S. and other foreign forces in Europe that employ Germans called for a 1.4% pay raise, which would have aligned with the 2019 increase given to U.S. federal employees. The union rejected that proposal.

But a third round of scheduled negotiations in November ended with the union rejecting the offer, largely because, Torres said, the Army wanted the increase to apply to a 15-month contract, not the current 12-month ones that German workers have.

Because the increase proposed by the Army is calculated over 15 months, it adds up to an annual pay raise that’s less than 3%, Koch said.

The offer being made to the German union was “higher than what our U.S. employees have been receiving,” Torres said. “We have a very competitive compensation package and we have very competitive rates.”

Compared to German public sector employers, “we are on par, if not higher,” Torres said.

While not unprecedented, it is rare for talks to go this long without an agreement, the Army said. A deal now depends on when union officials want to talk next, Torres said.

“We want a fair deal on the table,” Torres said.