U.S. European Command is holding off turning over land to German authorities, including Barton Barracks in Ansbach, as it assesses the possible effects of President Donald Trump's proposal to withdraw some 12,000 troops from Germany. (U.S. Army)

U.S. European Command is holding off turning over land to German authorities, including Barton Barracks in Ansbach, as it assesses the possible effects of President Donald Trump's proposal to withdraw some 12,000 troops from Germany. (U.S. Army) 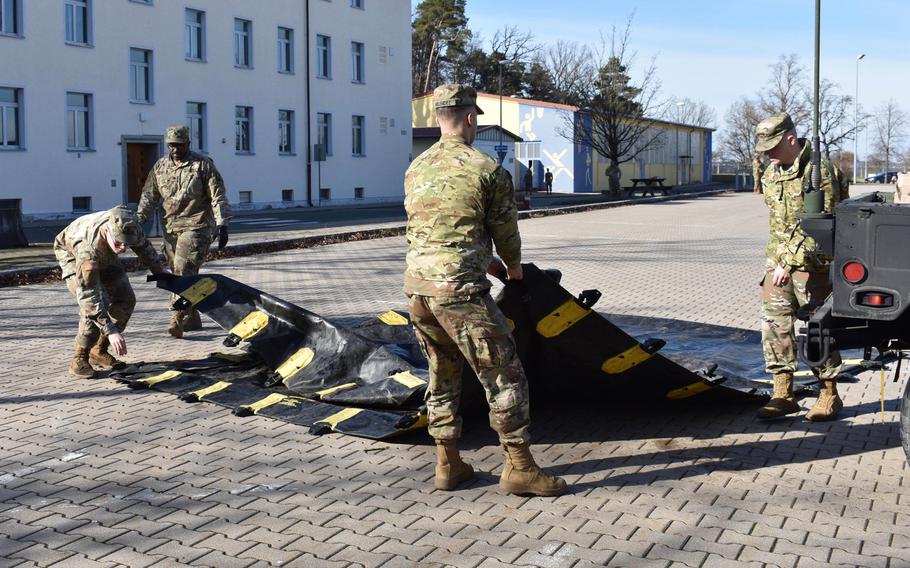 Soldiers prepare the fueling area to conduct refuel-on-move operations at Barton Barracks, Ansbach, Germany, in February 2020, en route to Zagan, Poland, as part of Defender-Europe 20. U.S. European Command is holding off turning over land to German authorities, including Barton, as it assesses the possible effects of President Donald Trump's proposal to withdraw some 12,000 troops from Germany. (Dani Johnson/U.S. Army)

STUTTGART, Germany — U.S. European Command is still holding off on a years-old plan to return numerous military sites to Germany as it examines whether the facilities will be needed “in response to the strategic shift in the security environment,” EUCOM said.

A directive from President Donald Trump to withdraw some 12,000 U.S. troops from Germany and move numerous units elsewhere in Europe or to the U.S. has further complicated the plan, which was first announced by the Pentagon in 2015.

Delays have sparked frustration in some German communities that have been eager to acquire the military real estate.

In Ansbach, local officials said they only recently learned that Barton Barracks will remain in the Army’s hands for the foreseeable future.

Locals were anticipating the property would be returned by 2021. Government officials in the area have said they want to redevelop the area to support a “Bavarian digital campus” and build affordable housing.

“The area blocked by the U.S. military is, therefore, worth gold,” Ansbach city council member Boris-Andre Meyer, a member of Germany’s The Left party, told Stars and Stripes this week.

Meyer called “false announcements and untruths by the U.S. Army” about handing over the land by 2021 inexcusable.

The Ansbach mayor’s office took a more measured tone, saying in a statement that acquiring the land to expand its local university represented a “special opportunity for Ansbach and the region.”

The Pentagon announced in 2015 that it planned to shut down 15 military sites in Germany and the United Kingdom as part of a cost-saving plan to consolidate infrastructure.

Most of the closures would involve smaller outposts, such as Barton Barracks. EUCOM launched a review of the consolidation plan in 2017. Three years later, that process is still ongoing.

“Considering the current European security environment, it is a prudent measure to review some of the decisions under the January 2015 European Infrastructure Consolidation effort,” EUCOM said in a statement Wednesday.

The military value and potential use of the sites have to be determined by EUCOM before the real estate can be returned to the Germans, officials said.

“This review is in progress and will provide updates to the host nation as soon as we have a decision from the Department of Defense,” the command said.

In March, the Pentagon also said it was putting on hold a plan to close RAF Mildenhall in England and move its refueling tankers and a special operations wing to Germany.

Defense Secretary Mark Esper said in July that the idea of relocating Mildenhall operations to Germany had been officially nixed after Trump issued his directive to pull troops out of Germany.

Another complicating factor would arise if former Vice President Joe Biden wins the tight race for the White House, which could lead to the Germany drawdown being shelved. The Biden campaign has been critical of Trump’s push to pull out of Germany and said it would review a plan that has the potential to divide allies.