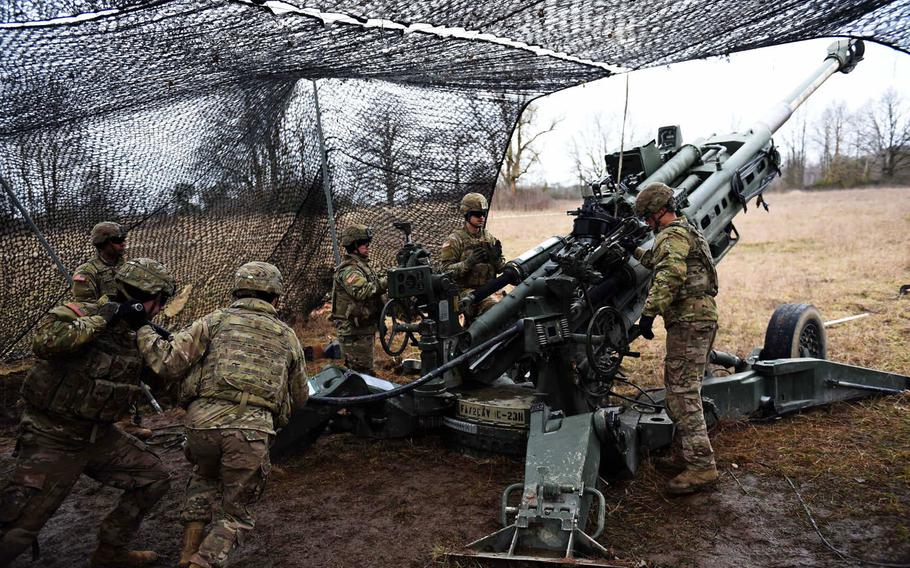 Soldiers with the Army's 2nd Cavalry Regiment demonstrate how to fire an M777 Howitzer, during an exercise in March 2019. U.S lawmakers are halting a Pentagon plan to remove 12,000 troops from Germany, according to a new defense bill. The regiment was one of the units slated to leave under the proposal. (Stars and Stripes)

Soldiers with the Army's 2nd Cavalry Regiment demonstrate how to fire an M777 Howitzer, during an exercise in March 2019. U.S lawmakers are halting a Pentagon plan to remove 12,000 troops from Germany, according to a new defense bill. The regiment was one of the units slated to leave under the proposal. (Stars and Stripes) 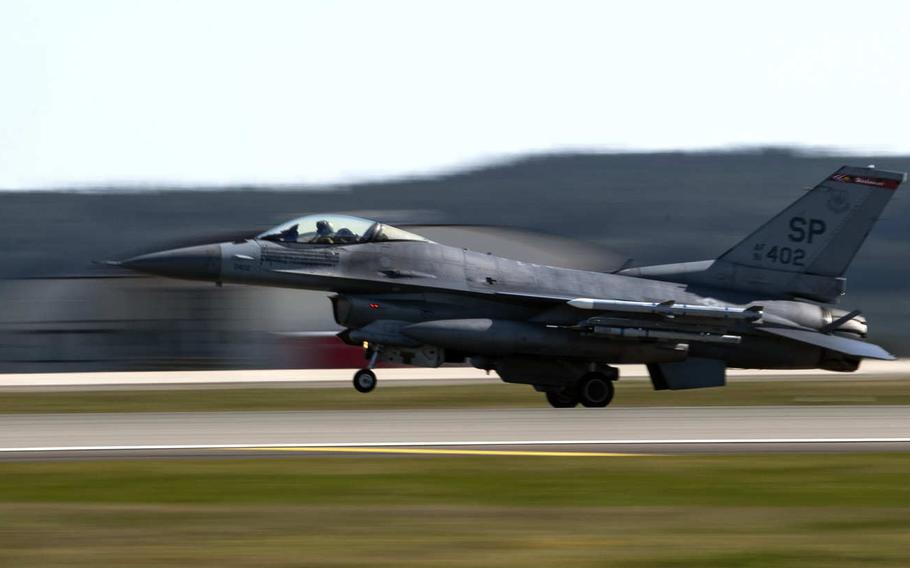 A U.S. Air Force F-16 Fighting Falcon of the 480th Fighter Squadron lands at Spangdahlem Air Base, Germany, in March 2020. The latest defense bill would halt a Pentagon plan to remove 12,000 troops from Germany. The base's F-16s were to be moved to Italy under the Pentagon plan. (Preston Cherry/U.S. Air Force)

STUTTGART, Germany — U.S. lawmakers are putting the brakes on a Pentagon plan to reduce the number of troops in Germany while also calling on the military to consider boosting force numbers in other parts of Europe.

The final version of the National Defense Authorization Act released by Congress on Thursday says that the defense secretary cannot reduce force levels in Germany below their current 34,500 number until 120 days after a detailed analysis that examines a wide range of possible security implications.

The provision means that a decision on whether to keep or reduce troops in Germany would be left to the incoming Biden administration, which has already expressed doubts about the plan.

The NDAA is expected to come a vote in the days ahead, with a possible veto-proof majority, given its bipartisan support. President Donald Trump has threatened to veto the bill unless it includes language that repeals a section in the 1996 Communications Decency Act that protects social media companies from certain liability protections.

However, Sen. James Inhofe, the Republican chairman of the Senate Armed Services Committee, refused this week to include the provision, saying it has no place in military legislation.

Besides measures aimed at blocking an abrupt troop withdrawal in Germany, the NDAA calls for the Defense Department and U.S. European Command to examine its force posture in southeastern Europe.

The military should consider whether it’s feasible to add permanently stationed or rotational deployments in the region, according to the NDAA, which also called for an assessment of Russia and China’s influence in that part of Europe.

Countries to be considered for possible troop increases include Greece, Romania and Bulgaria, all places where the military has been adding capabilities in recent years, as EUCOM aims to strengthen its position around the Black Sea and eastern Mediterranean.

In the case of Germany, Trump in July directed the Pentagon to remove 12,000 troops from the country in connection with complaints that Berlin was benefiting from a large U.S. investment while not carrying its own military weight.

Germany’s failure to meet NATO defense spending obligations that call for dedicating 2% of gross domestic product to military matters has been a central criticism during Trump’s tenure.

But opponents of the White House plan to reduce troops in Germany have argued that shifting roughly 6,000 service members back to the U.S. and another 6,000 to other parts of Europe would be expensive and make little strategic sense.

The plan had called for the 2nd Cavalry Regiment in Vilseck, Germany, to return to the U.S., while U.S. European Command in Stuttgart and other smaller units would relocate to Belgium, among other moves.

Lawmakers said the Pentagon must perform an analysis that assesses the effect a reduction would have on military families, as well as “additional costs for relocation of associated infrastructure.”

Reducing “during a time of growing threats in Europe would constitute a grave strategic mistake that would undermine United States national security interests and weaken NATO,” the NDAA stated.