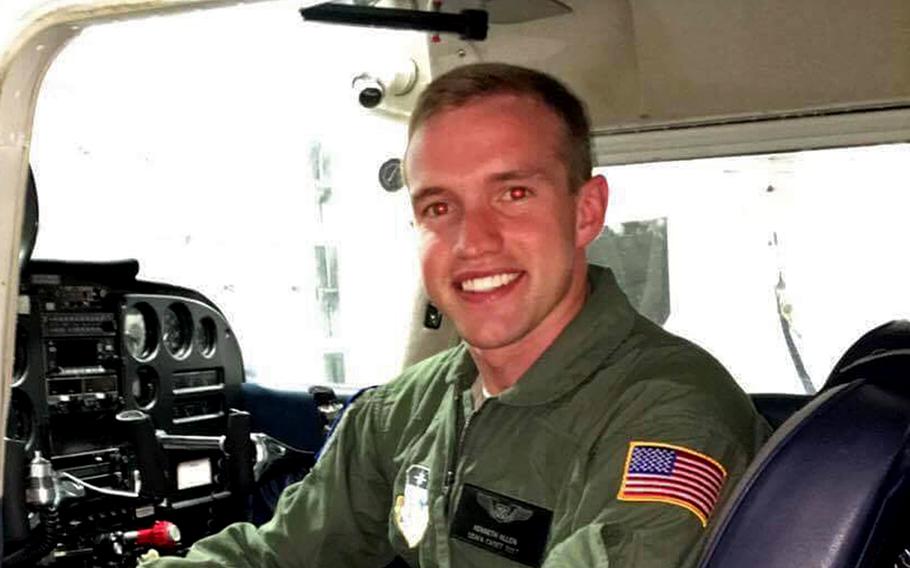 The F-15C crash that killed 1st Lt. Kenneth "Kage" Allen was the result of the pilots fixation on the intercept of the simulated adversary aircraft and failure to execute cockpit instrument visual scans while flying through cloud cover and experiencing spatial disorientation, said a report by an Air Force accident investigation board released Nov. 23, 2020. (Facebook)

Disorientation and reduced visibility were factors in the death of a U.S. Air Force pilot who crashed his F-15C fighter jet off the coast of England earlier this year, service officials said in a statement Monday.

Air Force 1st Lt. Kenneth “Kage” Allen, 27, with the RAF Lakenheath-based 48th Fighter Wing, was killed when his plane plunged into the North Sea about 140 miles northeast of the base during an exercise on June 15.

The crash was the result of “the pilot’s fixation on the intercept of the simulated adversary aircraft and failure to execute cockpit instrument visual scans” while flying through cloud cover and experiencing spatial disorientation, said a report by an Air Force accident investigation board.

At the time of the crash, multiple cloud layers were reported at altitudes of up to 25,000 feet. Other pilots in the area said the horizon was “difficult if not impossible to discern below” 9,000 feet, the report said.

Allen was considered an inexperienced pilot with only about 271 total flight hours. More than half of those were clocked in the F-15C simulator.

On the day of the crash, he was flying as the No. 4 jet in a four-against-six air-to-air exercise.

While flying east at 20,300 feet, Allen was directed to make a hard-right turn back toward the west and look for the adversary aircraft at a lower altitude, the report said.

He made the turn, simulated a missile shot against the other aircraft and continued his descent to 12,000 feet. When told his simulated strike was a probable miss, Allen entered a steep diving left turn to intercept the aircraft, descending at one point to a vertical velocity of 38,800 feet per minute, the report said.

At about 1,000 feet, Allen maneuvered his aircraft to nearly wings-level and pulled 8.2 G-forces in an apparent attempt to recover his jet above the water, the report said.

It appeared Allen was focused on intercepting the other aircraft, visually or with his radar, “and did not monitor his aircraft altitude, airspeed and attitude cockpit instruments,” accident board president Maj. Gen. Dean Tremps said in the report.

As he exited the low cloud layer at about 1,000 feet with a “visible horizon and ‘ground rush’ of the rapidly approaching ocean,” he sensed his position and tried to recover the aircraft, but was unable to, due to his speed and altitude, Tremps wrote in his opinion summary.

Allen hit the water at about 651 miles per hour. He was too low for a successful ejection, and there was no evidence that he attempted to eject, Tremps said.

The aircraft, valued at an estimated $45 million, was destroyed.

A search and rescue effort was launched immediately by the Air Force, but was hampered by poor visibility. United Kingdom coast guard and navy assets assisted with the search.

About two hours after the crash, teams located an oil slick and the pilot’s shredded liferaft. Other items recovered from the debris field included the pilot’s survival kit and unopened parachute. Allen’s body was recovered the same day, the report said.

The report ruled out aircraft malfunction, component failure and maintenance issues as contributing factors to the crash.

“Lt. Allen was an outstanding officer and a tremendous asset to the team,” Gen. Jeff Harrigian, U.S. Air Forces in Europe and Air Forces Africa commander, said in a statement. “No words can compensate for such a painful and sudden loss.”

The commander of the 48th Fighter Wing, Col. Jason Camilletti, said the wing and Allen’s 493rd Fighter Squadron were “truly touched by the tremendous outpouring of support from families, friends and partners around the globe in our time of grieving.”