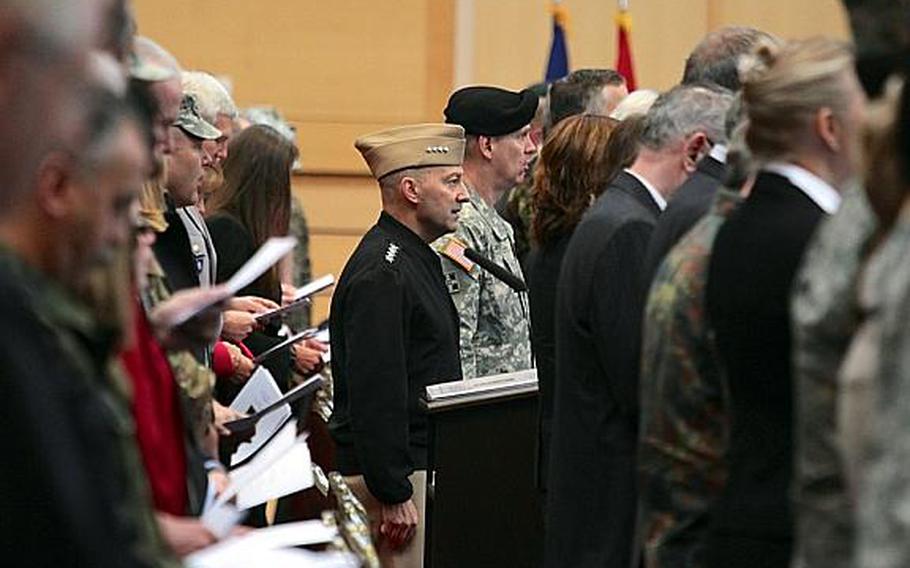 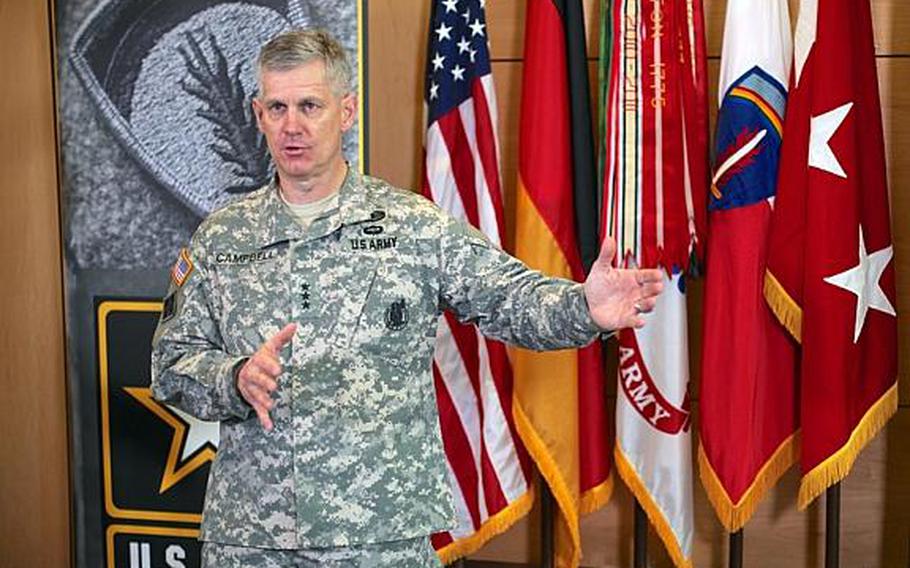 WIESBADEN, Germany &mdash; Lt. Gen. Donald M. Campbell Jr. officially assumed command Wednesday of U.S. Army Europe amid a continuing drawdown that will close the command&rsquo;s longtime headquarters and could see the number of American soldiers on the Continent drop by another 25 percent.

During his assumption of command ceremony at USAREUR&rsquo;s new home at Clay Kaserne in Wiesbaden, Campbell said he was taking charge of the command at &ldquo;a time of transition&rdquo; to a post-war environment that will mean fewer resources and fewer troops.

Campbell told reporters afterward that current planning calls for the number of soldiers in Europe to fall from about 40,000 to 30,000 over the next three to four years.

&ldquo;There has been a plan all along to go down to a lower number by about 2015,&rdquo; Campbell said, adding that he plans to go about the reduction the same way his predecessors did, ensuring &ldquo;that soldiers and families are afforded every opportunity to be taken care of as we go through that process.&rdquo;

Part of the reduction includes units already named for inactivation, Campbell said, without going into specifics, though he&rsquo;d earlier mentioned the inactivation of the 170th and 172nd Infantry brigades, leaving two ground combat brigades in Europe.

The 170th, previously based in Baumholder, completed its inactivation last month, and the 172nd at Grafenw&ouml;hr, is going through the same process now.

But Campbell indicated that additional units may be identified later to be included in the Army&rsquo;s drawdown.

&ldquo;Some decisions will have to be made at the Department of the Army and OSD [Office of the Secretary of Defense] levels specifically to tag certain units as the Army looks at capabilities and what it can do for the future,&rdquo; he said.

Adm. James G. Stavridis, head of U.S. European Command and supreme allied commander Europe, said in remarks during the ceremony that he gets asked often about the American commitment to Europe, &ldquo;and I&rsquo;d like to confirm for you the strong partnership and alliance not only of the United States with Germany, but with all of our European partners,&rdquo; he said.

In the future, he and Campbell both indicated, the relationship between the U.S. and its European allies is likely to focus more heavily on training.

Currently, about 8,000 USAREUR troops are deployed to Afghanistan, Stavridis said, and a small number is supporting the U.S. missile defense mission in Turkey, according to Campbell.

&ldquo;But long-term, my job will be to continue to build on the relationships and partnerships with our allies here in United States Army Europe,&rdquo; Campbell said, to maintain the abilities the U.S. and its allies have developed during a decade in Afghanistan.

&ldquo;You know, we&rsquo;ll be bringing soldiers over and units over from the United States over the next few years to train at the Joint Multinational Training Center [in Hohenfels],&rdquo; he said, alluding to a plan by Army Chief of Staff Gen. Raymond T. Odierno to align stateside units with overseas commands. The concept will have some stateside units rotating into Europe to train with European forces &ldquo;to build on the relationships that we&rsquo;ve built over the last 10 years with our partners in Iraq and Afghanistan as the war winds down,&rdquo; Campbell said.