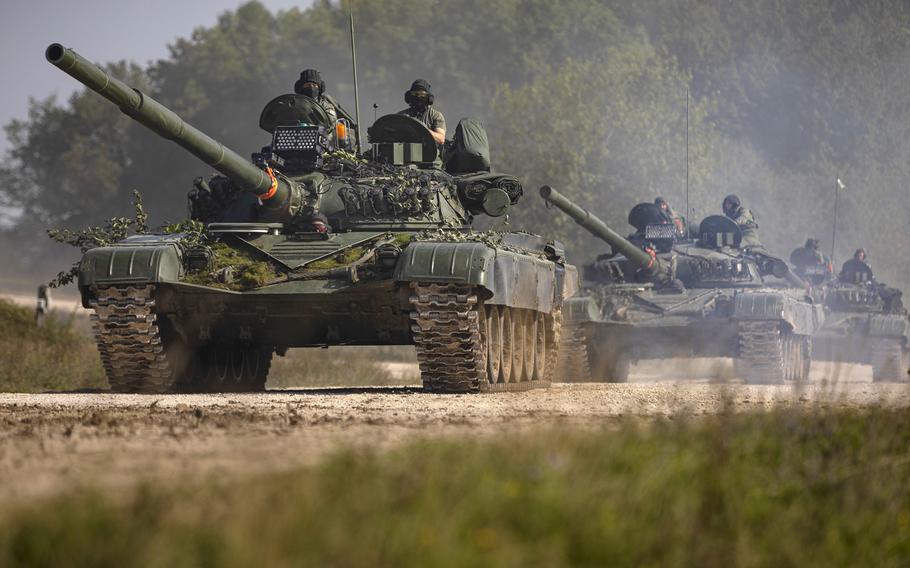 Three T-72 tanks roll down a dirt road during Combined Resolve XII at the Joint Multinational Readiness Center in Hohenfels, Germany, Aug. 24, 2019. A new Germany-based NATO command is now focused on the movement of troops and tanks around Europe in the event of a crisis. (Thomas Mort/U.S. Army)

STUTTGART, Germany — A new NATO command focused on speeding up the movement of allied troops and tanks around Europe has reached “initial operating capability,” the alliance said.

The command, the formation of which NATO approved last year, is one of two new headquarters focused on ensuring military hardware and forces can quickly cross national borders in the event of a crisis. The other command, based in Norfolk, Va., will help ensure maritime lines of communication between North America and Europe remain open.

“The new command in Ulm will help our forces become more mobile and enable rapid reinforcement within the alliance, ensuring we have the right forces in the right place at the right time,” Lungescu said Tuesday.

The command will have 160 personnel and is expected to be fully staffed by 2021. During a crisis, it will be able to draw on as many as 600 personnel, NATO said. The office falls under the responsibility of NATO’s Supreme Allied Commander Europe, Gen. Tod Wolters.

Over the past five years NATO has focused reinforcing its eastern flank with more exercises and basing troops in the Baltics and Poland because of concerns about a more aggressive Russia. But the ability to move large numbers of troops on short notice has been a long standing problem.

Setting up new commands to manage the flow of forces in a crisis is one of the ways the alliance has tried to adapt. NATO and the European Union also have discussed the need to streamline diplomatic clearances for troop movements as well as ensure that infrastructure on the continent — such as tunnels and bridges — are strong enough to handle tanks and other heavy military vehicles.