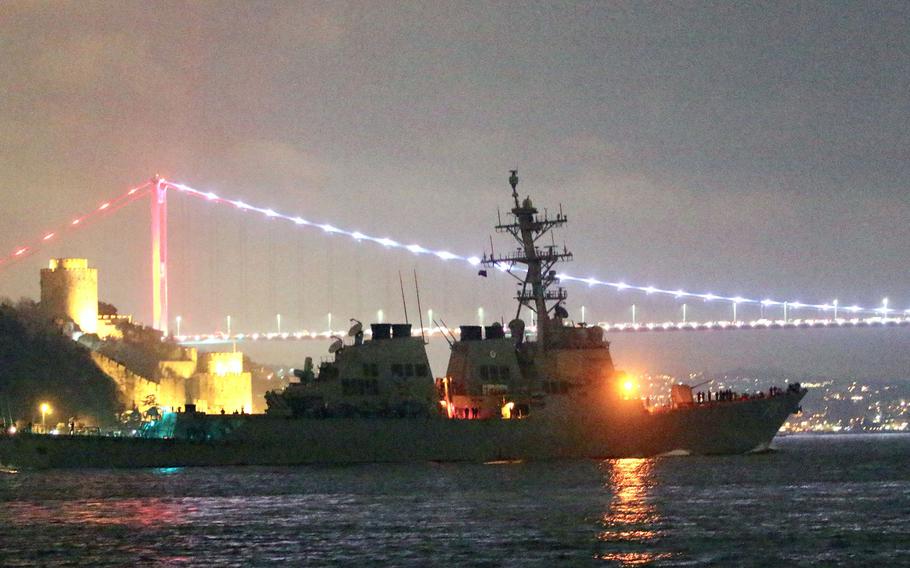 With Istanbul in the background, the USS Donald Cook heads for the Black Sea in January 2019. (Courtesy Yoruk Isik)

With Istanbul in the background, the USS Donald Cook heads for the Black Sea in January 2019. (Courtesy Yoruk Isik) STUTTGART, Germany — The Navy said it never received an order to halt warship maneuvers in the Black Sea earlier this year, despite testimony in a congressional impeachment hearing that President Donald Trump asked for the cancellation after he heard about it on television.

The question about a disruption in the Navy’s mission emerged during Congress’ impeachment inquiry into whether Trump withheld military support for Ukraine to pressure Kyiv into launching an investigation into political rival Joe Biden and his son, Hunter.

Christopher Anderson, a U.S. foreign service officer who served as a special adviser on Ukraine until July, told the House’s select committee on intelligence that Trump was upset in January about a CNN report on a Navy patrol in the Black Sea.

He told then-national security adviser John Bolton to end the mission, according to Anderson’s testimony released by lawmakers on Monday.

“I can’t speculate as to why. But that, that operation was canceled,” he said, adding that patrols resumed in February.

However, NAVEUR said Wednesday that no missions in the Black Sea were canceled or aborted in January.

The USS Fort McHenry conducted maneuvers in the Black Sea in early January. This was followed by a patrol that month by the USS Donald Cook, which visited Georgia, NAVEUR said.

The service carried out similar operations in February. It has become routine for the Navy to send warships into the Black Sea, where they train with regional allies to deter potential Russian aggression.

The area also has been a flashpoint between Ukraine and Russia. In November 2018, Russia opened fire on three Ukrainian vessels at the Kerch Strait, a narrow passage that connects the Black Sea to the Sea of Azov.

After the confrontation, the U.S. called on allies to demonstrate more support for Ukraine. And in April, NATO members responded with an agreement to boost their presence by conducting more port visits and boosting intelligence gathering in the region.

Anderson said patrols in the Black Sea were part of a broader effort to foster a stronger response to Russia after the clash at the Kerch Strait.

One key U.S. Navy patrol, he said, was a port visit in February by the USS Donald Cook to Ukraine’s port of Odessa, which was timed to the five-year anniversary of Russia’s military intervention in the country and eventual seizure of the Crimean Peninsula.

“So it was a pretty robust message to the Russians that we are not taking this,” Anderson said. “We are taking this seriously and not lying down.”

In later back-channel diplomacy talks, Anderson said “they (the Russians) admitted this was a very sharp message that they heard loud and clear.”