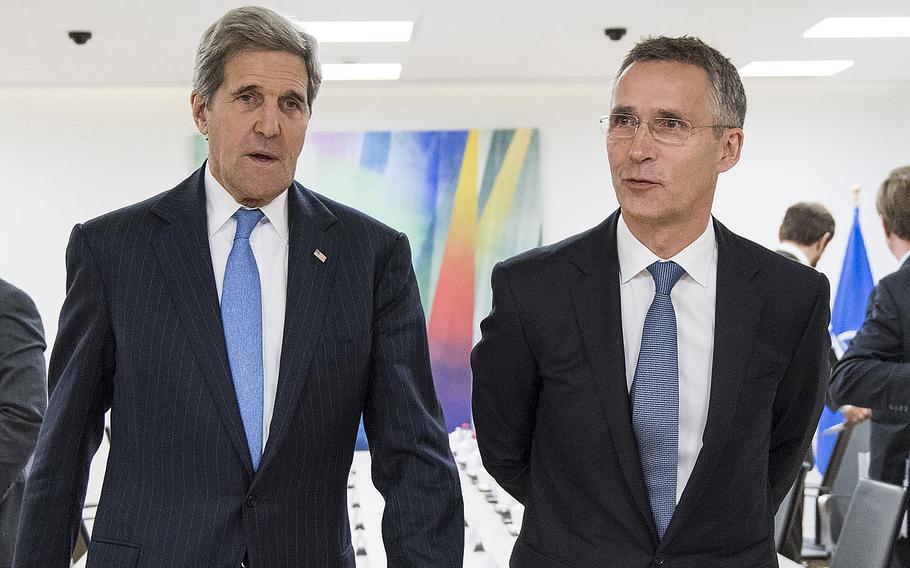 BRUSSELS — NATO leaders agreed Tuesday to keep a 12,000-strong troop presence in Afghanistan through 2016, a larger number than previously planned, as the alliance aims to support Afghan security forces in their struggle against a resurgent Taliban.

At NATO headquarters, allies approved continuing their training and advisory mission and worked on a plan to fund Afghan forces through 2020, seeking to shore up commitments on both fronts.

But new security threats in NATO’s own backyard also are pulling the alliance in other directions. Those challenges include Islamic State militants on NATO’s southern flank and Russia’s muscular posture on the alliance’s eastern border.

On Tuesday, NATO worked on a new strategy for countering such threats, with an emphasis on so-called “hybrid” threats.

“The security environment in which we meet today is dark,” Stoltenberg said at the start of the two-day summit of foreign ministers. “Terrorist attacks, violent instability, the breach of international rules.”

Allies will step up plans for dealing with the southern threat, where in recent days Germany and the United Kingdom have announced plans to increase the presence of air and sea power, Stoltenberg said.

NATO will consider ways to bolster contributions to the U.S.-led coalition in Syria and Iraq, as well as more measures for reassuring the security concerns of Turkey, which downed a Russian warplane last week that had allegedly violated its airspace.

“We will discuss how we can continue to support Turkey and provide different kinds of assurance measures,” Stoltenberg said.

Already, Spain has a Patriot missile battery in Turkey on an air-defense mission, and the U.S. Air Force recently deployed a group of F-15s to patrol Turkey’s border with Syria. More measures are being discussed, Stoltenberg said.

In the wake of Russia’s annexation of Ukraine’s Crimea Peninsula last year — a stealth operation that involved troops without Russian military uniforms and other unconventional techniques — NATO has focused more attention on developing a strategy for dealing with such hybrid threats. Stoltenberg said NATO will adopt a new hybrid warfare strategy, “which applies in all directions.”

At the same time, allies will examine ways to improve communication with Moscow, to “restore predictability” and avoid future confrontations during operations in Syria, he said.

On Afghanistan, the U.S.-led NATO alliance approved a presence that parallels a new American plan to keep a larger-than-expected force in the country amid concerns about a resurgent Taliban. The new U.S. plan, announced by President Barack Obama’s administration in October, calls for a force of 9,800 troops to remain in Afghanistan through most of next year to continue its mission to advise and assist.

It was not immediately clear if NATO’s continued mission through 2016 will enable the United States to operate at a lower level as other allies step forward.

“We will maintain that regional presence,” Stoltenberg said.

Afghan Foreign Minister Salahuddin Rabbani thanked allies during a news conference for their continued support of Afghan forces. He also said Afghan troops largely have held their own against Taliban fighters, despite nearly losing the northern city of Kunduz earlier this year.

“Despite the many challenges we face, Afghanistan has done much better than expected,” Rabbbani said. “We expected a very hard fighting season.”

Obama’s original plan would have pulled out all but a small embassy-based contingent of troops from Afghanistan by the end of 2016, a move that would have likely spelled the end to NATO’s Resolute Support mission. However, concerns about recent gains by the Taliban prompted the policy shift.

Under the new plan, at least 5,500 U.S. troops will remain in Afghanistan through 2017, leaving future drawdown decisions to the next American president.

“The bottom line I think is that for NATO, Afghanistan remains unfinished business. And despite these competing challenges closer to home, we have to follow through on those commitments,” U.S. ambassador to NATO, Douglas Lute, told reporters Monday

Meanwhile, near the conclusion of NATO’s meeting on Wednesday, allies will vote on whether to extend NATO membership to Montenegro, a small country that for years has sought to become the alliance’s 29th member.

German Foreign Minister Frank-Walter Steinmeier said he expects the alliance to welcome Montenegro, a small Balkan state of about 600,000 people.

“From our point of view it is clear,” he said. “We are supporting the invitation of Montenegro.”