NATO to focus on reassuring allies worried about Ukraine 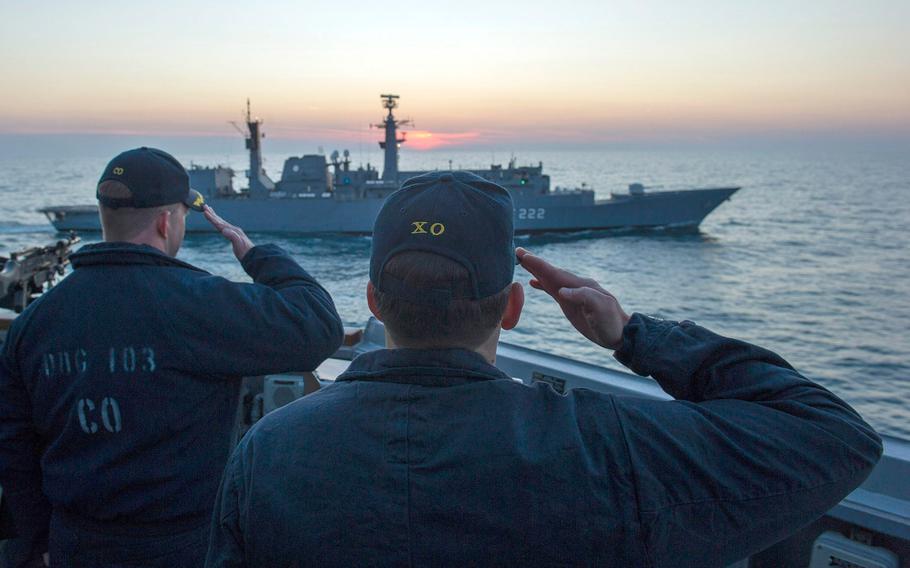 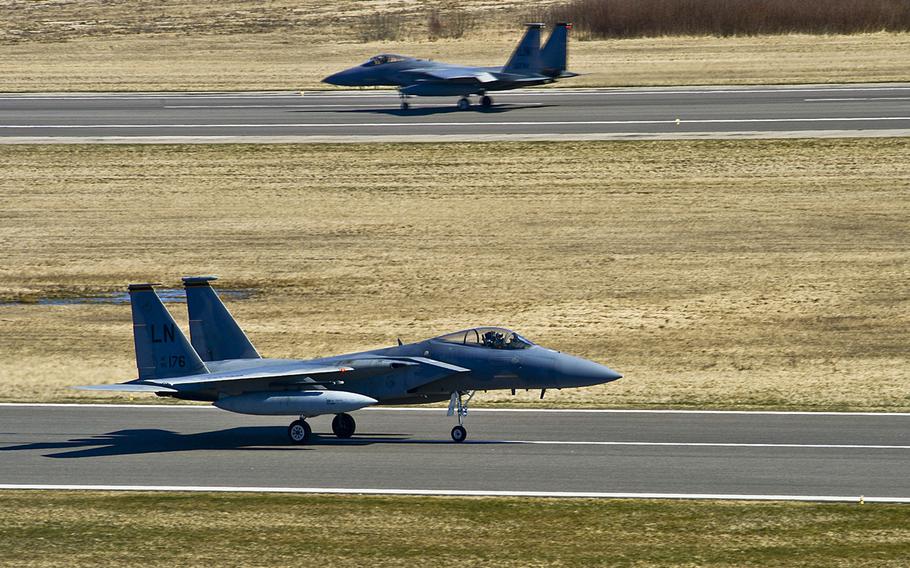 F-15C Eagle jets attached to the 493rd Expeditionary Fighter Squadron taxi during a regional training event at Siauliai Air Base, Lithuania, on April 1, 2014. The U.S. Air Force assumed command of the NATO Baltic Air Policing mission for a four-month rotation from January to May of 2014. (Dana J. Butler/U.S. Air Force) 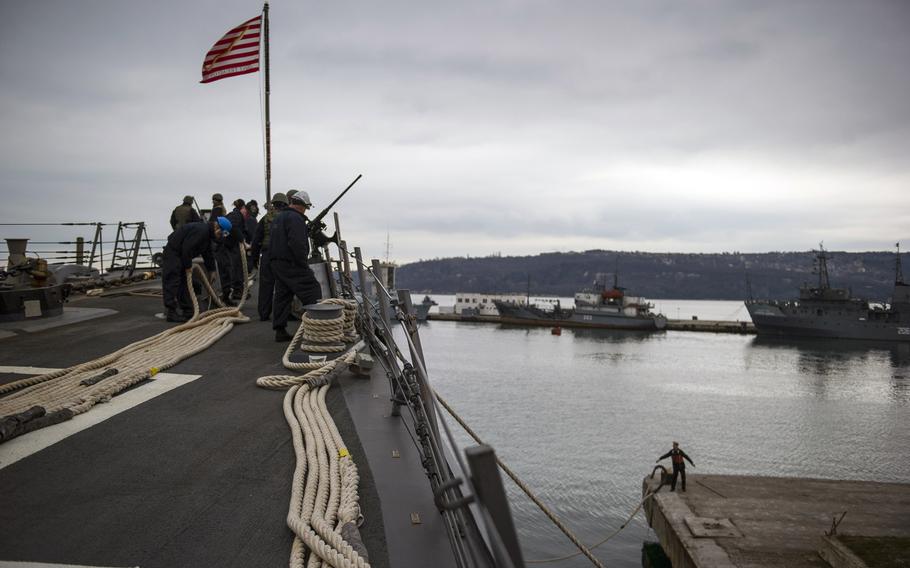 U.S. sailors prepare to get underway aboard the guided missile destroyer USS Truxtun in Varna, Bulgaria, after a scheduled port visit March 16, 2014. The Truxtun conducted training with naval forces of Romania and Bulgaria in the Black Sea. (Scott Barnes/U.S. Navy) 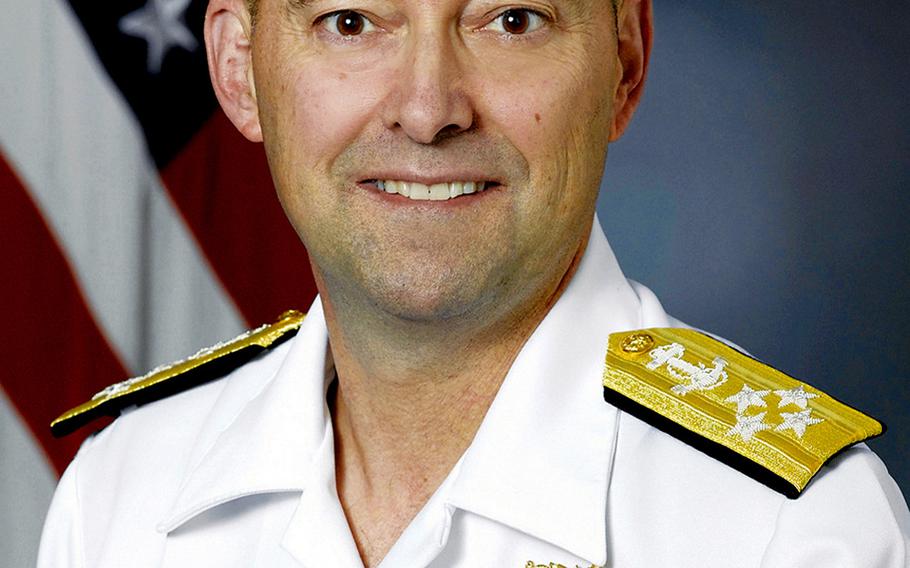 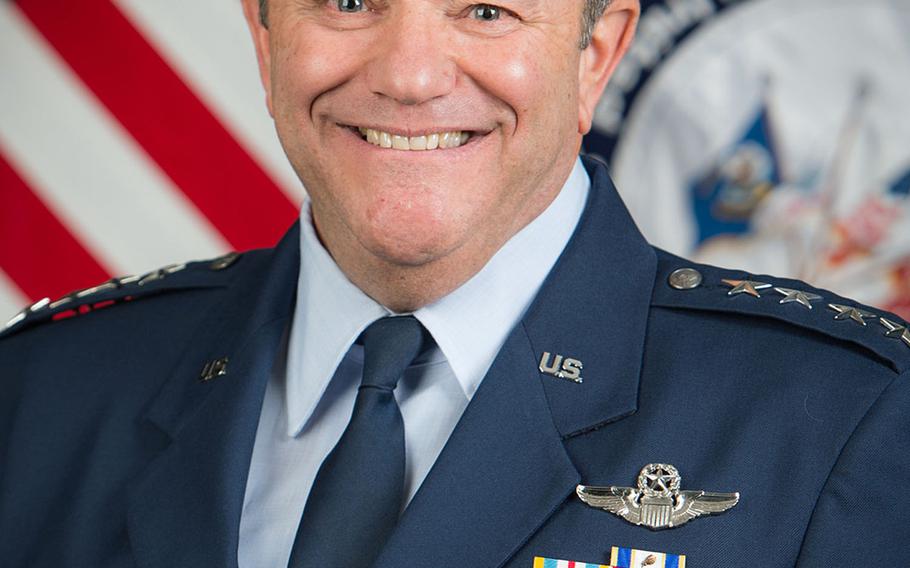 NATO’s next move in response to the crisis in Ukraine is likely to be more of the same: more NATO fighters patrolling over the Baltics, more rotations of warships into the Black Sea and more surveillance of Russian movements around Ukraine.

“Essentially, what we are looking at is a package of land, air and maritime measures that would build assurance for our easternmost allies,” Gen. Philip Breedlove, NATO’s supreme allied commander and head of U.S. European Command, told The Associated Press in an interview Wednesday. “I’m tasked to deliver this by next week. I fully intend to deliver it early.”

U.S. soldiers from the Texas-based 1st Brigade, 1st Cavalry Division — the unit already designated as the U.S. contribution to the NATO Reaction Force — could be deployed to the region to train with allies in the east. However, any such move would be on a rotational basis rather than any permanent repositioning of an additional Army brigade in Europe, military officials said.

“Rotating them over to participate in an exercise is one of the many options on the table to reassure allies,” said Col. Martin Downie, spokesman for Supreme Headquarters Allied Powers Europe.

Other NATO options now under review include the deployment of aircraft to guard NATO airspace that borders Russia as well as planes capable of striking against ground forces. A more prominent naval presence in the Baltic and Black seas could also be an option for the alliance, military officials said.

As the crisis in Ukraine presses on, the U.S. and its allies in Europe are being forced to reconsider the security landscape in Europe during what many experts have described as perhaps the Continent’s most significant crisis in a generation.

In the short term, NATO’s focus will be on ways to reassure allies and deter any chance of Russian aggression on alliance territory — a move regarded by experts as highly unlikely. What’s less clear is whether Moscow will, at some point, intervene in eastern Ukraine, where Russia has amassed thousands of troops along the border, rattling both Kiev and NATO.

Some specific steps could include activation of command-and-control centers within the NATO command structure, surveillance of Russian forces and events in Ukraine, and placing the NATO Response Force on alert, Stavridis told Stars and Stripes. Other likely actions in the region include moving aircraft, ships and troops into nations in the eastern part of the alliance, especially the Baltics and Poland, as well as conducting military exercises.

More support for Ukrainian forces could take many forms, including NATO military mentors and trainers, intelligence-sharing, the transfer of weapons and ammunition, and nonlethal assistance, such as night vision devices and communication gear, said Stavridis, who now serves as dean of the Fletcher School at Tufts University.

“I doubt they are looking seriously at boots on the ground or other combat options,” he said, adding that the U.S. could be forced to take a harder look at its overall force posture in Europe in light of the crisis.

“I would guess the entire drawdown is being re-evaluated, and we may end up with three or even four combat brigades back in Europe, as well as restoration of the combat aircraft cuts of recent years,” Stavridis said.

During the next six months, U.S. European Command and U.S. authorities are likely “to look seriously at the U.S. ground and air footprint,” he said. “Assuming decisions by the end of the year, effects would begin to be felt in 2015.”

“If not a full-blown Cold War, we certainly look to be heading into a very frosty Cool War in the years ahead,” Stavridis said.

Paradoxically, the Ukrainian crisis may help revitalize NATO and give it a new lease on life after its engagement in the long war in Afghanistan ends later this year.

Conceived originally as a bulwark against Soviet expansion in the 1940s and ‘50s, the alliance lost its main raison d’etre with the end of the Cold War and the disappearance of its only external military threat. Since then, it has engaged in a series of military actions that had little to do with its original defensive purpose — such as the conflict in Kosovo, the bombing of Libya, or anti-piracy patrols off the Somali coast — leading to widespread doubts about the future need for a trans-Atlantic military alliance.

So far there has been no sign during the Ukraine crisis that Russia, whose defense budget is just 10 percent of NATO military spending, poses a military threat to any member nation. Still, the prospect of Russian military action in Ukraine has galvanized those in the alliance who say it represents the best reason for returning the organization to its original purpose.

NATO Secretary-General Anders Fogh Rasmussen has said Russian actions in Ukraine threaten the post-Cold War order and pose a security threat to Europe as a whole.

On Thursday, Moscow responded, accusing Rasmussen of exploiting the crisis to justify the alliance’s existence by conjuring up a nonexistent threat.

“The constant accusations against us (show) that the alliance is trying to use the crisis in Ukraine to rally its ranks in the face of an imaginary external threat to NATO members and to strengthen demand for the alliance ... in the 21st century,” Russia’s Foreign Ministry said in a statement.