‘NATO is here to protect you,’ alliance’s new leader declares in Poland visit NATO Secretary General Jens Stoltenberg meets with U.S. Air Force personnel at Lask air base in Poland, where he was making his first overseas visit as the alliance's top civilian, on Oct. 6, 2014, (John Vandiver/Stars and Stripes)

NATO Secretary General Jens Stoltenberg meets with U.S. Air Force personnel at Lask air base in Poland, where he was making his first overseas visit as the alliance's top civilian, on Oct. 6, 2014, (John Vandiver/Stars and Stripes) A Polish servicemember stands next to a U.S. F-16, at Lask air base, with a NATO AWACS surveillance aircraft in the background, on Oct. 6, 2014. AWACS are currently deployed over Polish airspace as part of an effort to monitor the security situation in the region. (John Vandiver/Stars and Stripes) 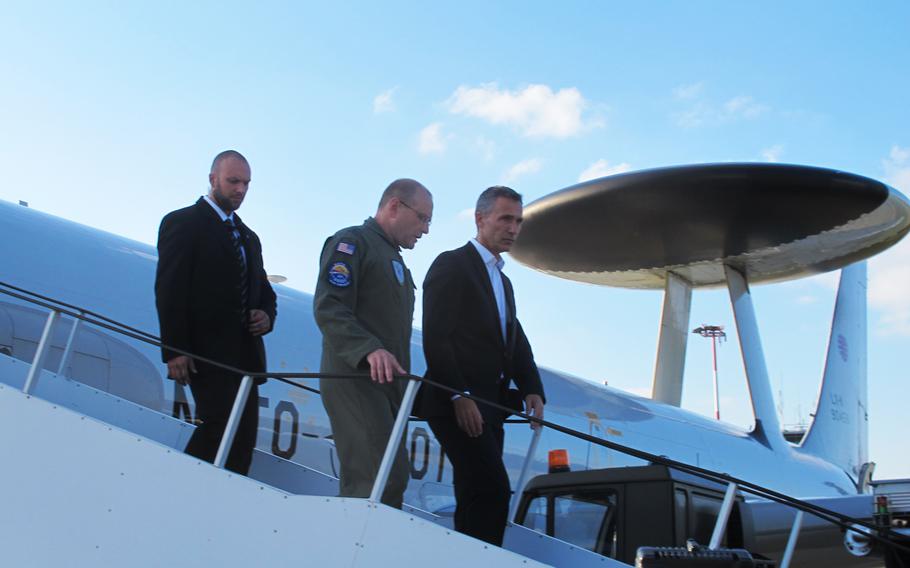 NATO Secretary General Jans Stoltenberg leads the way down from a NATO AWACS aircraft, which he toured during a visit to Poland on Oct. 6, 2014. The surveillance aircraft has been deployed in Poland and across eastern Europe since Russia's annexation of Crimea, which has prompted widespread concerns about security. (John Vandiver/Stars and Stripes)

LASK, Poland — Against a backdrop of fighter jets lined up along a Polish runway, NATO’s top official on Monday struck a diplomatic tone toward Russia as he asserted the alliance’s readiness to protect member states from any threat.

The former Norwegian prime minister also called on Russia to use its influence over separatists in Ukraine to honor a cease-fire that has increasingly been under threat of falling apart.

“We are very concerned that the cease-fire is violated so much,” said Stoltenberg, who assumed leadership of NATO last Wednesday. “I will call on Russia to use all their influence to make sure separatists are following the cease-fire.”

Stoltenberg stopped short of the kind of tough language used by his predecessor, Anders Fogh Rasmussen, who was known for his firm and frequent demands that Russia pull back its troops amassed along Ukraine’s border.

Still, in visiting Poland, Stoltenberg signaled that countering an increasingly assertive Russia would be a centerpiece of his tenure as secretary-general of an alliance that is wrestling with a security landscape vastly changed from a year ago.

His top priority will be implementing a NATO readiness plan that calls for a new rapid-reaction “spearhead force,” a series of staging bases in eastern Europe and a steady presence of rotational forces to man those bases.

In Poland, Stoltenberg credited NATO forces with protecting the skies over the Baltics, where alliance aircraft routinely patrol as part of an air-policing mission that has quadrupled in size in recent months.

Sixteen NATO fighters now take part in the mission, up from four. NATO officials say alliance intercepts of Russian aircraft have more than doubled in the past year, spiking in the wake of Russia’s annexation of Ukraine’s Crimea peninsula in March.

Since the crisis in Crimea, the U.S. Air Force has been a nonstop presence at the airbase in Lask, where airmen have been training and working alongside Polish F-16 fighter pilots.

Launched in 2012, the U.S. Air Forces in Europe training detachment in Poland has gone from periodic to constant rotations since March.

“It’s that forward presence. It lets them know we are here, we are ready,” said Air Force Lt. Col. Jack Harman, the detachment commander from the 52nd Operations Group. “It means a lot here in Poland.”

Currently, there are roughly 100 airmen, including members of the 510th Fighter Squadron out of Aviano Air Base, Italy, who have been in Lask for the past month working with their Polish counterparts. A small Air Force team of 10 is stationed there year-round to manage the mission and stream of rotating troops.

Col. Robert Winkler, commander of the 52nd Operation Group, said the Poles have improved vastly in the two years since the detachment was launched, allowing the air forces to collaborate on advanced war fighting techniques.

“I would say you almost can’t tell the difference between their pilots and ours,” he said.

Besides training, the F-16s are ready to respond to contingencies if called upon, he said.

The Aviano squadron will soon wrap up its tour, to be replaced by a contingent of Air National Guard troops from Illinois. With a continuous mission in Poland, the Air Force has had to reach out beyond forces based only in Europe, Winkler said.

For rank-and-file airmen, the mission in Poland has been a change from the norm.

Stoltenberg singled out Poland for stepping forward to increase its defense expenditures at a time when many allies fall short of NATO spending benchmarks. Like other secretary-generals, Stoltenberg urged allies to spend more, echoing comments he made earlier in the day during a meeting with Polish political and defense leaders in Warsaw.

Stoltenberg is next slated to travel to Turkey, where NATO faces a security challenge on its southern flank amid concerns that foreign fighters in Syria and Iraq could return to Europe to carry out attacks.

“We face great challenges and uncertainty to the east and to the south,” he said.