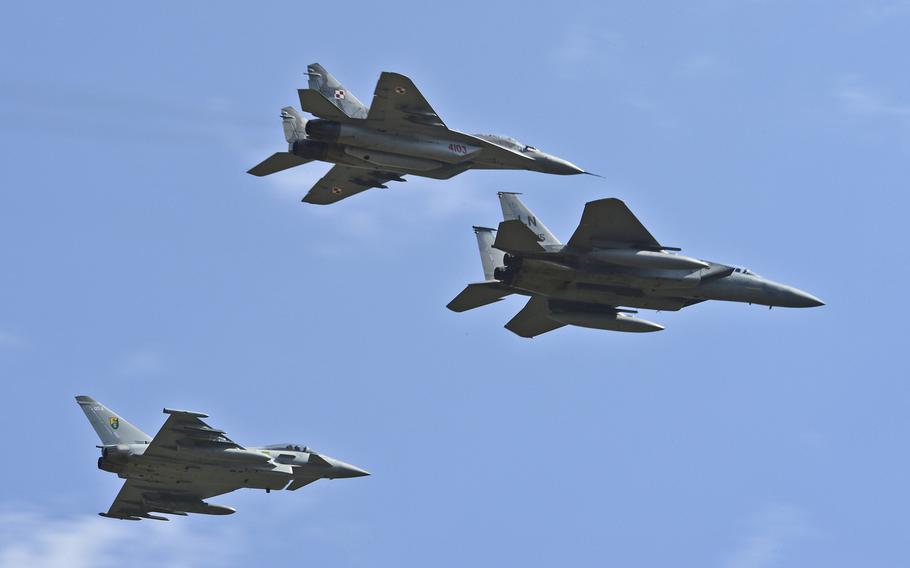 A Polish air force MiG-29, U.K. Royal Air Force Typhoon and a U.S. Air Force F-15C Eagle fly in formation over Aiauliai Air Base, Lithuania, April 30, 2014. NATO will soon cut in half the number of fighters taking part in air policing missions over the Baltics from 16 to eight. (Dana J. Butler/U.S. Air Force)

Beginning in September, the number of NATO aircraft taking part in air policing missions over the Baltics — where alliance jets are routinely scrambled to intercept Russian aircraft — will be cut from 16 to eight, officials said.

NATO has been conducting the air policing mission in the Baltics since 2004, but the number of aircraft taking part in the effort surged in the wake of Russia’s intervention in Ukraine last year.

In early 2014, NATO increased the number of aircraft from the standard four to eight. However, many allies offered additional aircraft and the number rose to 16.

“During this period, the stated requirement remained at eight aircraft, but the alliance allocated extra resources in order to send a strong message regarding NATO’s willingness to defend allied airspace,” Janzen said. If future assessments indicate a need for more aircraft for the mission, allies have sufficient assets to quickly surge air power into the Baltics, he said.

In 2014, NATO saw a fourfold rise in the number of times it was forced to scramble jets to intercept Russian aircraft patrolling near NATO territory. In all, NATO jets conducted more than 400 intercepts last year, with more than 150 being carried out by the NATO Baltic Air Policing Mission.

Scrambles and intercepts are standard air policing procedure when an unknown aircraft nears NATO airspace. However, NATO officials have said flights over international airspace also pose a potential risk to civil aviation since the Russian military often does not file flight plans and its aircraft fly with their on-board transponders turned off. This makes them invisible to civilian air traffic control.

While NATO has been critical of Russia air force military maneuvers near NATO territory, there have been few reported cases in which Russian aircraft have violated the airspace of NATO member states, and some of these lasted just seconds. There have been no recent incursions.

“Recently there were no airspace violations. Russian aircraft were escorted many times, but we avoided violations,” Olekas told AFP. “Taking that into account, the decision was made based on a rational use of resources.”

Lithuania, Latvia and Estonia, all countries without fighter aircraft, rely on NATO to protect their airspace. Air policing in the Baltics is conducted by allies on a rotational basis. The mission is currently being headed up by Belgium, Italy, Norway and the United Kingdom.

Russia’s involvement in Ukraine, sparked a surge in overall NATO military presence in eastern Europe, where the U.S.-led alliance has increased the number of troops taking part in training missions.

The U.S. also has plans to pre-position tanks and other heavy equipment across the Baltics, Poland, Romania and Bulgaria in the near future.