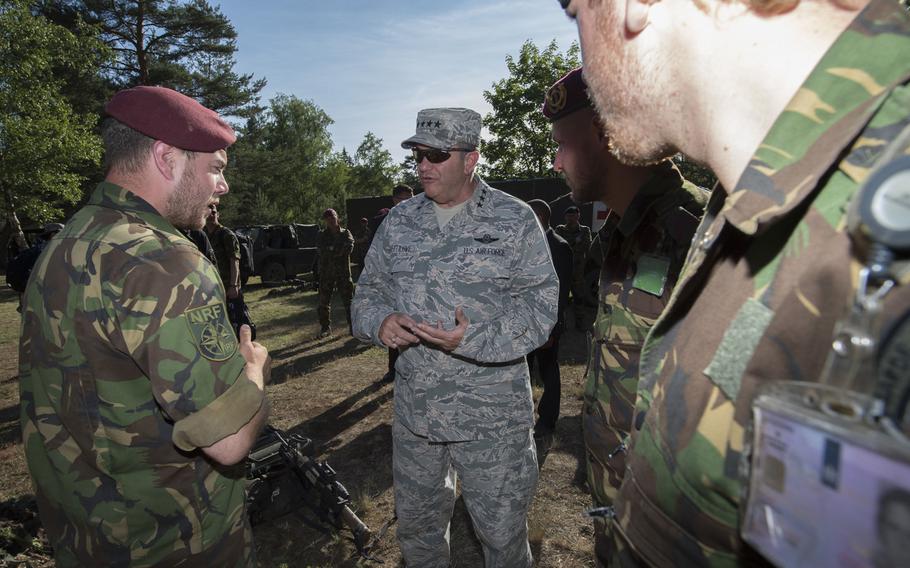 The United States is not the only NATO country considering positioning military hardware in eastern Europe as part of an alliance effort to improve its state of readiness, NATO’s top military commander said Thursday.

Gen. Philip Breedlove, NATO’s supreme allied commander, said the forward placement of military equipment on the alliance’s eastern flank as a deterrent to Russia was one of many measures assigned to military planners after NATO’s summit in Wales last year.

The U.S. plan to position heavy equipment in the Baltics, Poland and elsewhere in eastern Europe has been under consideration for months but recently garnered greater media attention.

“What you have heard about is one of those steps we are taking in response to decisions of senior leaders in Wales,” Breedlove told reporters in Poland, where a series of NATO exercises is underway. “Several nations are considering that request and, yes, the United States is looking at the possibilities.”

Standing in front of a NATO tank, Breedlove, together with NATO Secretary-General Jens Stoltenberg and Polish Defense Minister Tomasz Siemoniak, talked of an alliance that was adapting to a new threat environment in Europe.

“The peaceful period after the Second World War is over,” Siemoniak said. “We cannot defend our European way of life if we don’t do more for our defense.”

The officials were on hand to observe maneuvers by NATO’s new spearhead response force, which is in the midst of its first major training exercise since it was formed last year.

More than 2,000 troops from nine NATO nations are participating in Noble Jump, one in a series of exercises aimed at refining the quick reaction unit.

Breedlove said the unit is a “great fighting and striking force” that can respond on short notice to any threat. While Russian aggression in Ukraine was what prompted the formation of the spearhead force, formally known as the Very High Readiness Joint Task Force, it also is expected to deal with contingencies in other areas. In the south, NATO has concerns about the rise of the Islamic State group, which operates within miles of NATO partner Turkey.

“It is a force for NATO in the north, south, east and west,” Breedlove said.

For NATO, forward positioning equipment at various sites in eastern Europe would streamline the logistics of conducting exercises. However, it also risks escalating tensions with Russia, which has warned of answering any such move with a buildup of its own.

Since Russia’s annexation of the Crimea Peninsula from Ukraine last year, NATO has stepped up the pace of exercises in eastern Europe. The U.S. has been rotating in forces from the United States to maintain a steady presence without permanently basing troops there.

Stoltenberg said the alliance will deliberate on plans for positioning equipment on the alliance’s eastern flank at next week’s meeting of defense ministers in Brussels, though he said no final decisions have been made.

In the case of the U.S. military, officials are looking at the possibility of putting a brigade’s worth of heavy equipment in five countries, said Siemoniak, who was in Washington last month for discussions on the proposal.

“We are prepared to host,” he said. Since Russia’s intervention in Ukraine, Poland has been aggressively pushing to be more assertive in showing it will not allow Russia to threaten its former satellite states on the alliance’s eastern periphery. “I expect this decision to be made over the next few weeks, and I do hope it is going to be a positive decision.”