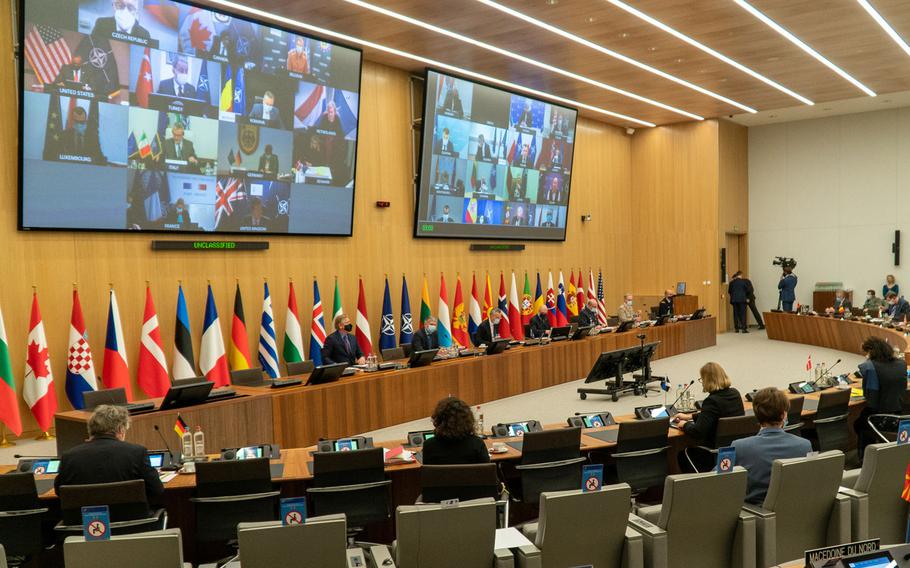 NATO holds its meeting for allied defense ministers at its headquarters in Brussels, Feb. 18, 2021. Most of the participants, including U.S. Defense Secretary Lloyd Austin, attended via secure teleconference. (NATO)

NATO holds its meeting for allied defense ministers at its headquarters in Brussels, Feb. 18, 2021. Most of the participants, including U.S. Defense Secretary Lloyd Austin, attended via secure teleconference. (NATO) Spanish troops salute during a transfer of authority ceremony in Iraq in December 2020. NATO allies agreed Feb. 18, 2021 to a large expansion of NATO's training mission in Iraq. The additional allied troops could ease some of the demands on U.S. forces in the country. (Travis Mueller/U.S. Army)

STUTTGART, Germany — NATO allies agreed Thursday to significantly expand their training mission in Iraq, a move that will bolster the alliance’s position in the Middle East and potentially ease demands on U.S. forces in the country.

The non-U.S. NATO mission will grow from its current 500 service members to about 4,000, and its efforts will extend to regions beyond the greater Baghdad area, NATO Secretary-General Jens Stoltenberg said at the end of a two-day meeting of alliance defense ministers.

The U.S., which began drawing down its forces last year, has about 2,500 troops in Iraq in a separate mission.

Stoltenberg said the expansion would start in the coming months.

“Increases in troop numbers will be incremental,” he said.

NATO has been in Iraq since 2004, when it deployed a small number of advisers who worked with Iraqi security forces both in the country and in neighboring nations.

In 2018, the alliance began its current training mission aimed at helping Iraqi forces prevent a resurgence of the Islamic State group, which a few years earlier controlled large swaths of the country.

NATO got involved in Iraq at the urging of the Trump administration, which had pressured the alliance to share more of the security burden.

The U.S. strike that killed Iran’s Maj. Gen. Qassem Soleimani in January 2020 prompted allies to suspend the training mission, which consisted of about 500 troops.

But NATO now appears poised to do more by vastly expanding the initial effort. The request for additional trainers came from the Iraqi government, Stoltenberg said.

The two days of high-level talks that concluded Thursday were the first attended by U.S. Defense Secretary Lloyd Austin in his new role.

Allies also discussed the way forward in Afghanistan, but no decision was announced on whether the U.S. and other allied forces intend to meet a May 1 deadline for exiting the country, in connection with a peace deal with the Taliban.

Increased violence in the country and the prospect of a spring Taliban offensive have raised concerns that the deal could be derailed.

“The talks are fragile and progress is slow,” Stoltenberg said. “We are faced with many dilemmas.”

The Biden administration also is in the midst of a review of U.S. force levels and the role of its troops in Afghanistan.