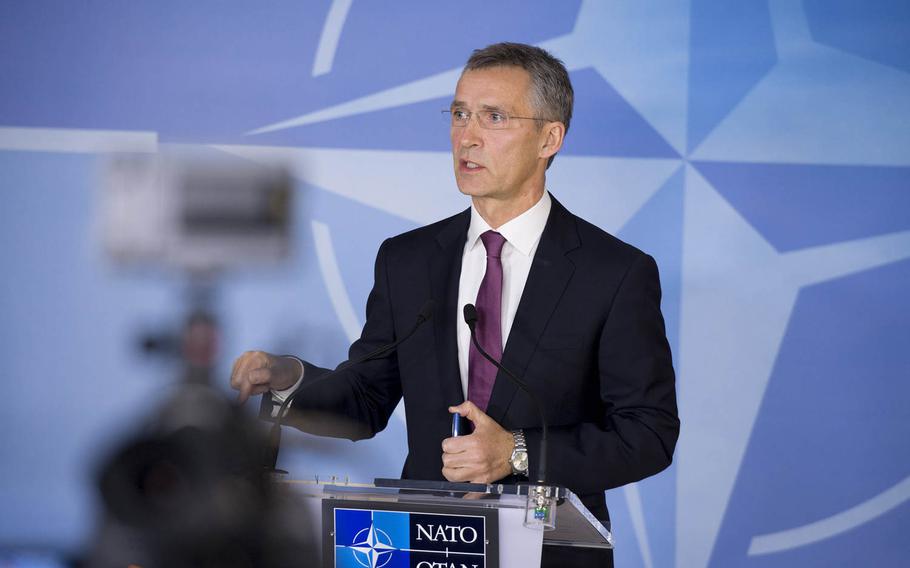 NATO Secretary General Jens Stoltenberg talks to the media ahead of a meeting of NATO foreign ministers in Brussels, Tuesday, Dec. 2, 2014. (Photo courtesy of NATO)

BRUSSELS — NATO and Afghanistan on Tuesday formally launched the new training and advisory mission that will take over from departing alliance combat troops on Jan. 1.

“Today we have decided to launch the Resolute Support mission ... to train, assist and advise the Afghan National Security Forces,” Stoltenberg said.

Ghani paid tribute to the NATO troops who were killed or wounded in the 13-year war in Afghanistan. More than 3,400 NATO troops have died and more than 30,000 have been wounded.

Ghani’s openness to NATOs’ continued involvement in Afghanistan contrasts sharply with the attitudes of his predecessor, Hamid Karzai, who had become increasingly hostile toward the U.S. and NATO presence.

Karzai’s disdain toward the West and a protracted election battle to determine his successor had raised doubts as to whether the Resolute Support mission would go forward at all.

Key was the signing of a Bilateral Security Agreement with the United States and a Status of Forces Agreement with NATO laying out the terms for a follow-on force to remain in Afghanistan next year. Karzai had refused to sign. Ghani did so immediately after forming a unity government in September with his election rival, Abdullah Abdullah, who is the chief executive in his Cabinet and accompanied him to Brussels for the NATO meeting.

Ghani said the Afghan army and police — built up, trained and financed by the U.S. and its allies — were ready to assume full responsibility for national security next year.

“But despite our firm commitment, we are not yet able to do everything alone. Your continued support will therefore be key in ensuring that our collective gains will be enduring,” Ghani said.

Afghan forces, which number about 350,000 have been taking heavy casualties this year at the hands of Taliban insurgents as international forces withdrew. Without the superior armaments and air power Western forces provided, Afghan forces have been hard-pressed to keep insurgents at bay, let alone defeat them.

“The flower of our youth is fighting and dying to build a new nation,” Ghani said. “God willing, we will prevail.”

The alliance-led combat force in Afghanistan, which at its peak numbered nearly 140,000, has already shrunk to just 13,300 troops. For the new mission, Washington has pledged nearly 10,000 troops — mainly trainers and advisers — along with a contingent of anti-terrorism forces. NATO allies and partner nations are expected to contribute about 2,000 more advisers.

Taliban leaders have vowed to continue fighting until all foreign troops have left the country. In recent weeks, insurgents have conducted a series of attacks in Kabul and across the country in an apparent effort to undermine the Afghan security forces and faith in the government’s ability to provide adequate security.

“The Resolute Support mission now marks a new phase in NATO’s support for the Afghan security forces,” Secretary of State John Kerry said. “The recent wave of Taliban attacks shows how vital it is that the international community remains firm in its support.”

Although the new mission will be primarily to train and advise, U.S. officials have said the United States would also continue to provide some level of air support for Afghan troops battling the insurgents, because the Afghan air force isn’t likely to become fully capable for another two years.

Also during Tuesday’s meeting, NATO established an initial rapid-reaction force that will serve to reassure allies in eastern Europe concerned about Russia’s intentions and deter any threats against them.

Stoltenberg told reporters the initial rapid-reaction unit, consisting of several hundred troops from Germany, the Netherlands and Norway, is intended to be an interim solution until NATO’s so-called Spearhead Force becomes operational in 2016. Current plans call for that to be a brigade-strength unit with 4,000-6,000 troops.

“But we need to be ready in the meantime,” Stoltenberg said, and the interim rapid-reaction unit ”will be available early next year to provide the quick-reaction capability we need, straight away.”

The units are intended to provide assurances to countries like Estonia, Latvia, Lithuania and Poland, all of which have a common border with Russia.

Russia’s annexation of Ukraine’s Crimea peninsula earlier this year and its continuing support for pro-Russian separatists in eastern Ukraine has unnerved NATO allies once under Soviet domination and soured relations with the 28-member alliance, which has found new purpose in showing support for allies on Russia’s periphery.

A statement issued after a meeting of NATO and Ukrainian officials earlier Tuesday, condemned Russia’s “deliberate destabilization” of eastern Ukraine, including providing tanks and weapons, and its military buildup in Crimea.

Stoltenberg said the alliance had set up several trust funds to help Ukraine improve its military capabilities in logistics, command and control, communications and cyberdefense. Funding will also be provided for the retraining of former soldiers and rehabilitation of wounded troops.

But the alliance has stopped short of providing weapons to Ukraine’s armed forces, as demanded by some U.S. politicians.