NATO 70th anniversary comes with celebrations and an undercurrent of uncertainty 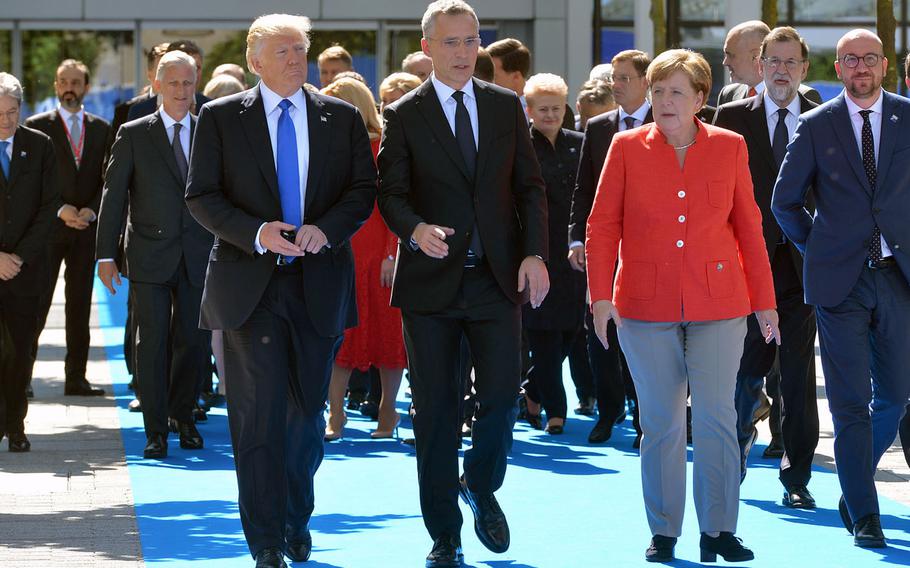 President Donald Trump, NATO Secretary-General Jens Stoltenberg and German Chancellor Angela Merkel walk with other leaders during a NATO meeting in Brussels, Belgium, May 25, 2017. Observers say a chief concern as NATO turns 70 is that the source of tension is mainly coming from the alliance's two most important member states: the U.S. and Germany. (NATO)

President Donald Trump, NATO Secretary-General Jens Stoltenberg and German Chancellor Angela Merkel walk with other leaders during a NATO meeting in Brussels, Belgium, May 25, 2017. Observers say a chief concern as NATO turns 70 is that the source of tension is mainly coming from the alliance's two most important member states: the U.S. and Germany. (NATO) 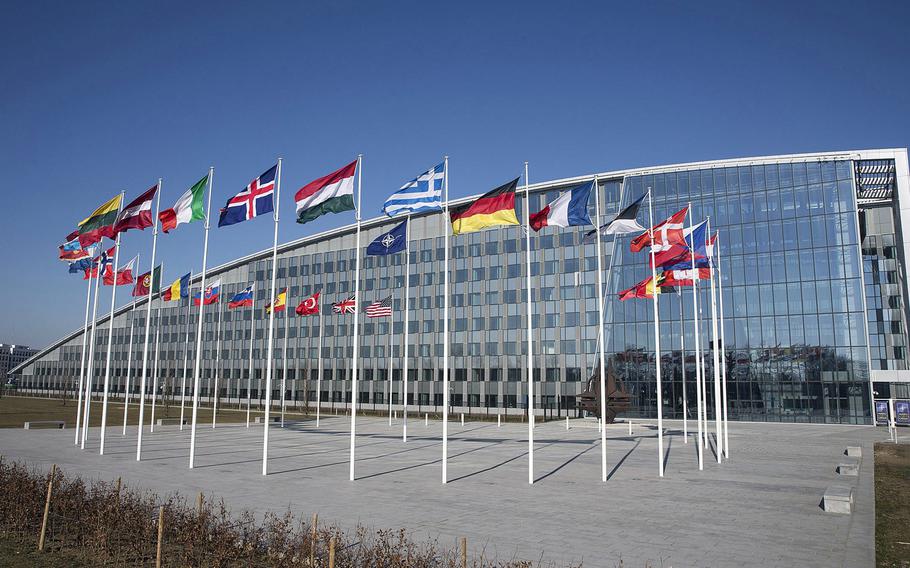 A view of NATO headquarters in Brussels, Belgium. According to observers, a chief concern as the alliance turns 70 is that the source of tension is mainly coming from NATO's two most important member states: the U.S. and Germany. (NATO)

STUTTGART, Germany — NATO will be awash in nostalgia as leaders assemble this week in Washington to mark the security pact’s 70th anniversary, but behind the ceremonial pomp, feuds between key members pose a growing threat to alliance solidarity, analysts say.

In Washington, NATO will have center stage for much of the week. Its top official, Secretary-General Jens Stoltenberg, will meet at the White House with President Donald Trump on Tuesday. Stoltenberg will give a speech the next day before both houses of Congress.

Foreign ministers from across the 29-nation alliance are traveling to the U.S. capital for high-level talks, not only to mark NATO’s anniversary on Thursday, but to work on their strategy for countering Russian threats.

However, even as NATO leaders tout generations of solidarity, there is uncertainty over whether the pact’s close ties will last.

NATO is at a turning point and its durability over decades shouldn’t be taken for granted, said Heather Conley, director of the Europe program at the Center for Strategic and International Studies in Washington. While allies will be “swimming in nostalgia” this week, there has been an “erosion of credibility of America’s security guarantees,” she said.

“We are not going back to the way it was,” Conley said. “The stakes are absolutely enormous and this anniversary gives us an opportunity to reflect on how enormous they are.”

A chief concern, according to NATO observers, is that the source of tension is mainly coming from two of the alliance’s most important member states: the U.S. and Germany.

Berlin’s refusal to meet a NATO defense spending target of 2% of gross domestic product by 2024 has provoked accusations that Europe’s economic powerhouse is a security free-rider. The criticism has intensified to new levels under Trump.

German budget plans unveiled last month also reveal that military spending as a share of GDP is projected to be lower than expected—declining from 1.37 in 2020 to 1.25 by 2023, German media reported. That drew a fresh rebuke from U.S. Ambassador to Germany Richard Grenell, who said such a move was “unacceptable.”

“It is said that we will not achieve NATO’s goal of spending 2% of the gross domestic product on defense — we do not even want it anymore,” Ischinger told the Die Welt newspaper on Monday. “We underestimate the frustration of our 1.5% announcement in Washington and Brussels.”

If the U.S. were to abandon NATO, Germany would be “completely blind, deaf and defenseless,” Ischinger said.

Partly in response to such concerns, Germany and some other European allies have sought to reduce their military dependence on America.

The differences between Berlin and Washington don’t end with defense spending. The Trump administration has blasted Germany over its Nord Stream 2 gas line project with Russia and there are deep disagreements over how to resolve America’s trade imbalance with Germany.

Pressure over such issues was building well before the arrival of Trump.

“But we are allowing them to fester and deepen,” Conley said. “The approach Trump is taking rhetorically is causing the German public to go in the opposite direction.”

Germany talks up the value of NATO, “but there is no doubt that Germany is undermining alliance solidarity in its backing away from the 2%. It’s a really big problem for the alliance,” said John R. Deni, a NATO expert at the U.S. Army War College. “But the browbeating from Trump only gets you so far — it actually generates its own antibodies.”

Trump’s rhetoric has stoked fears that he wants to pull America out of the trans-Atlantic military bloc. It has also has raised concerns that adversaries, namely Russia, could begin to view the alliance as a paper tiger — even though the talk has coincided with the U.S. military expanding its mission in Europe.

Former U.S. ambassadors to NATO Nicholas Burns and Douglas Lute, in a report dubbed “NATO at Seventy: An Alliance in Crisis,” concluded that the military pact that formed during the Cold War faces “one of its most difficult crises in seven decades.”

“NATO’s single greatest challenge is the absence of strong, principled American presidential leadership for the first time in its history. President Donald Trump is regarded widely in NATO capitals as the alliance’s most urgent, and often most difficult, problem,” Lute and Burns wrote.

Stoltenberg, speaking Monday with reporters at his Brussels headquarters, downplayed the tensions.

“The strength of NATO is that despite these differences we have always been able to unite around our core task, and that is to protect and defend each other.”