MPs in Germany trained on use of pepper spray 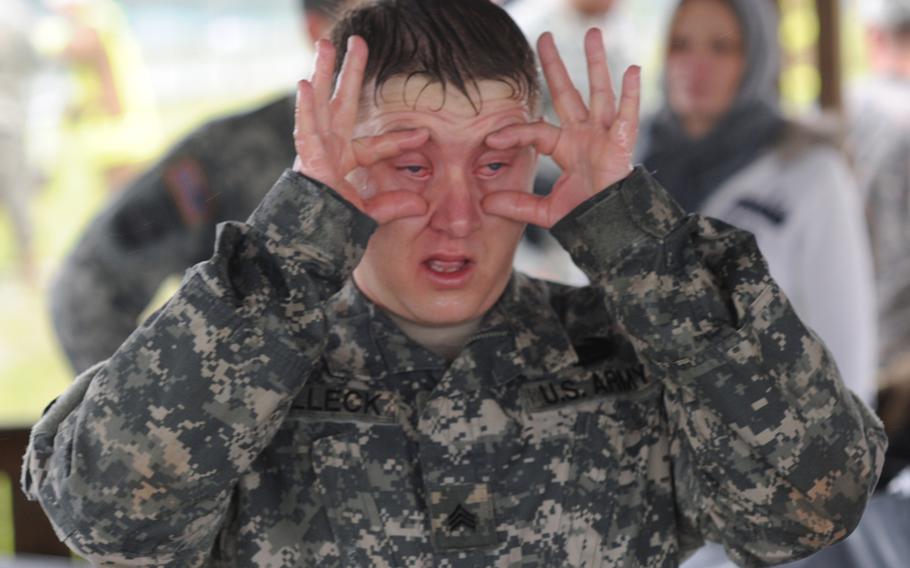 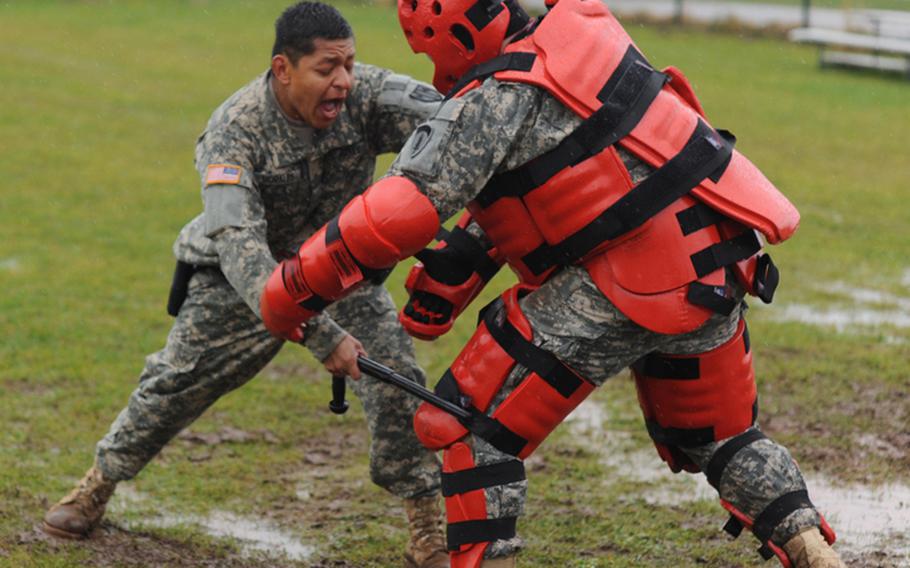 After being pepper-sprayed, Pvt. Argenis Morales had to show that he could still function -- despite the pain and irritation the spray caused -- by subduing a belligerent person, played by a soldier in a padded suit. (Bob McElroy/Courtesy U.S. Army)

The first MPs in Europe to receive the spray were trained to use it in January, said Ronald Toland, U.S. Army Garrison Ansbach public affairs officer.

Pfc. William Turner, 24, an Ansbach MP from Fort Collins, Colo., experienced what it&rsquo;s like to be sprayed in the face during training.

&ldquo;It was a good experience, but it hurt,&rdquo; he said, adding that the spray is a good weapon to have. &ldquo;You never know what&rsquo;s going to happen when you get called.&rdquo;

The spray has been used by civilian law enforcement for two decades and by MPs in the United States for several years. But before USAREUR issued it in Germany, the command sought approval from German authorities who issue the spray to German police, Kelley said.

MPs in Italy, Belgium and the Netherlands have yet to be issued the spray because of restrictions in those countries, he said.

&ldquo;There weren&rsquo;t a lot of intermediate weapons,&rdquo; he said of the MPs&rsquo; arsenal before they were issued the spray. &ldquo;They went from physical presence to verbal persuasion, and then they were forced to use combatives (martial-arts) skills or the PR24 (police baton). The next step would be deadly force.&rdquo;

MPs are sometimes assaulted while attempting to make an arrest, he said.

&ldquo;As soon as you put your hands on people, especially if they have been drinking, once they realize they are about to be arrested, they get combative,&rdquo; he said.

Pepper spray is part of a $250,000 training-and-new-equipment program for MPs in Europe, Kelley said, although he declined to name some of the new gear that will be carried by MPs.

He said MPs are getting training on handling individuals using or threatening to use weapons, boosting their cooperation with Air Force Security Forces personnel and planning to test a computerized communications system that alerts MPs in patrol cars about incidents and allows them to input the type and time of likely responses.