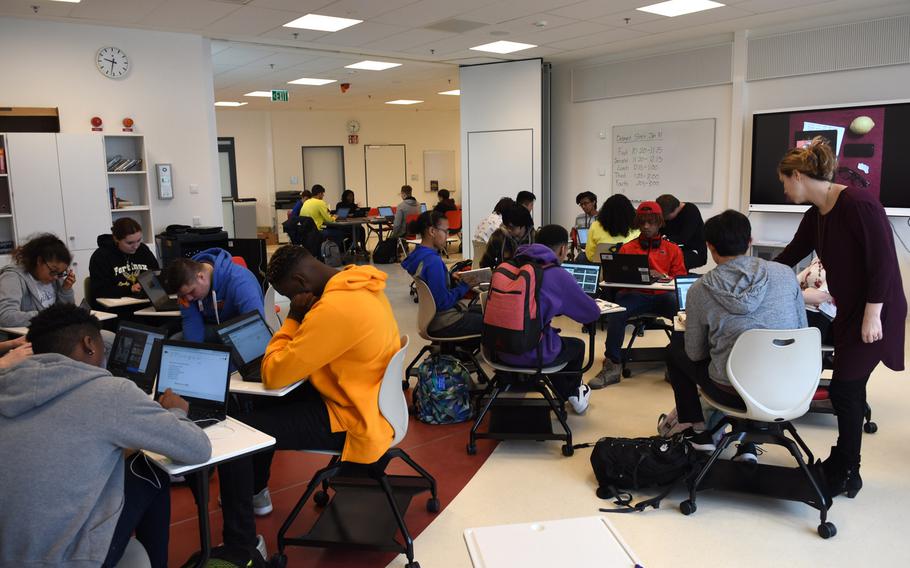 Students work in class last spring at Kaiserslautern High School, Germany. A year after it opened, black mold was found in one of the wings of the state-of-the-art school, forcing it to be closed. (Jennifer H. Svan/Stars and Stripes)

Students work in class last spring at Kaiserslautern High School, Germany. A year after it opened, black mold was found in one of the wings of the state-of-the-art school, forcing it to be closed. (Jennifer H. Svan/Stars and Stripes) 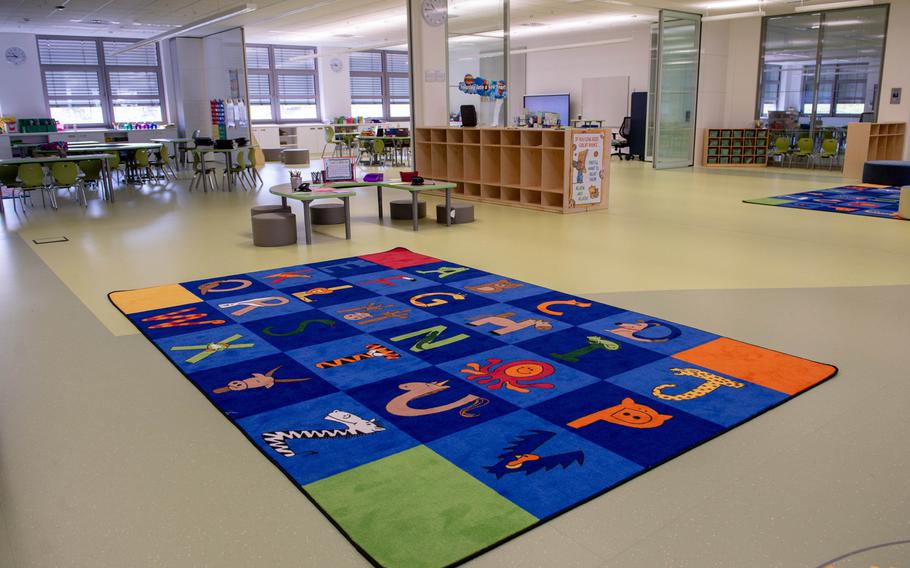 A "neighborhood" with open-concept classrooms at the new Vogelweh Elementary School, which opened in August 2019. Just weeks after it opened, water damage forced the closure of part of the brand-new school. (Brian Ferguson/Stars and Stripes)

Black mold was discovered in one of the walls at Kaiserslautern High School last spring, while a water leak was detected last week under the floor in the Vogelweh Elementary School’s first-grade “neighborhood” — a term used to describe a cluster of open classrooms in Department of Defense Education Activity’s newer facilities, dubbed “21st Century Schools.”

The building issues have not affected instruction, said the principals at both schools.

“We do not expect any disruption to daily activities,” said Vogelweh principal David Lee, in a note to parents last week.

Students and furniture were moved out of the affected area at the Vogelweh school to allow the floor to dry, officials said.

Work was also being done to determine the source of the leak, said Steve Ross, DODEA program manager for the Army Corps of Engineers Europe district, in a statement. USACE is overseeing repairs at both schools.

The black mold at the high school may have started with clogged drains in one of the school’s “living walls,” a plant wall and irrigation system that’s one of several non-traditional design features built into the $74 million school, officials said. The mold was found in adjacent walls.

The wall near where the mold was found is constructed of reinforced concrete with an aluminum frame – which holds fabric-lined baskets filled with plants and soil – and a drip irrigation system. It drains into the building’s sewer and stormwater system, Ross said. Leaves appear to have plugged the open drains connected to one of the walls, causing water to overflow and drain into the floors, raising humidity in the atrium, Ross said.

Kaiserslautern High School has several living walls throughout the school. They’re intended to remove indoor air contaminants, serve as an educational tool and enhance the transmission of natural light.

The living wall was a pilot project at Kaiserslautern and no other DODEA school in Europe has one, Ross said.

The mold was tested this summer and damaged plaster was removed, Ross said. Dehumidifiers were used for several weeks to dry out the affected areas. The next step is to repair the damaged areas and retest the air quality, Ross said.

Repair efforts are expected to take about a month and a half.

Meanwhile, the wing where the mold was found remains closed.

Exposure to mold may cause health issues, particularly in individuals with allergies or asthma, the Centers for Disease Control and Prevention says on its website. There have been no reports of any illnesses connected to the mold, school officials said.

The flexibility of modern schools, such as Kaiserlautern and Vogelweh, is what allowed classes to continue without “any disruption,” Lee, the elementary school principal, said in his note to parents.

“Our 21st Century learning environment allows us to accommodate a variety of class configurations and maintain our high expectations for instruction,” he wrote.