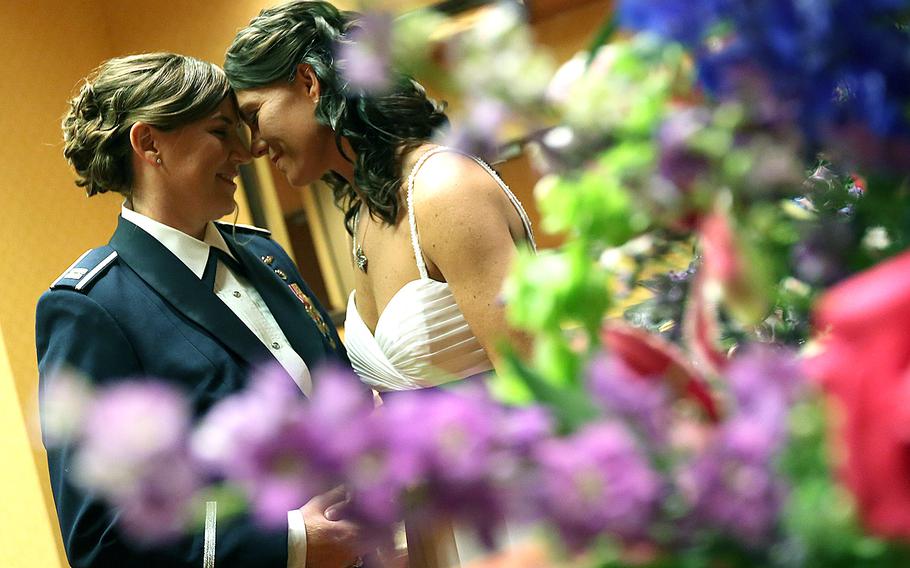 Air Force Capt. Dawn Tanner and retired Lt. Col. Dana McCown stand together before their wedding in Omaha, Neb., on May 3, 2013. Recent legislation has given servicemembers and dependents in same-sex marriages access to the same benefits and assignment opportunities as heterosexual couples. (U.S. Air Force)

A Department of Defense spokesman confirmed Thursday that Germany has been added to a list of 40 countries where commands can sponsor same-sex spouses for benefits designed to allow military families to stay together during a move. More than 40,000 military personnel live and work in the country.

Germany’s exclusion from the list has puzzled families and gay-rights advocates for more than a year. Since 2001, the country has recognized same-sex “life partnerships,” a status that resembles gay marriage in other countries and offers many of the same benefits.

Yet other countries made the military’s command sponsorship list long ago. Approval for sponsorships in Italy, which prohibits gay marriage and domestic partnerships, was approved last summer.

The military asked its combatant commands to explore the issue in their respective theaters after the military began recognizing same-sex marriages in 2013, following partial repeal of the Defense of Marriage Act by the U.S. Supreme Court.

Although few, if any, U.S. basing agreements with foreign nations refer to the gender of a spouse allowed to come over with military personnel, American officials said they would seek agreement with each country on interpretation before sponsoring same-sex spouses.

According to a State Department cable obtained by Stars and Stripes last year, a request for German approval on the matter was answered in March 2014, when Germany asked that the U.S. recognize its own partnership status in return. The U.S. still hadn’t responded to that note by the following November, an official with the German foreign ministry said at the time.

U.S. European Command, which is responsible for working with host nations on the issue, has declined to talk about the delay in the past.

The status of command sponsorship remains unclear in other countries, including South Korea, which hosts more than 30,000 military personnel.

Thursday’s confirmation by the military came only after a news release from the LGBT advocacy group American Military Partner Association announced the change. The group’s president, Ashley Broadway-Mack, said one of its members was notified of the change on Wednesday by a travel manager at Randolph Air Force Base in Texas.

"A huge burden has been lifted off of the shoulders of so many of our military families," Broadway-Mack said.